With the Blessings of The Guru…

The first issue of The Chitrāpur Sunbeam was published in January 1954, and began befittingly, with Blessings from H.H Shrīmad Ānandāshram Swāmījī.  The next issue (April, 1954) carried the English translation from Kannaḍā, which is reproduced below. 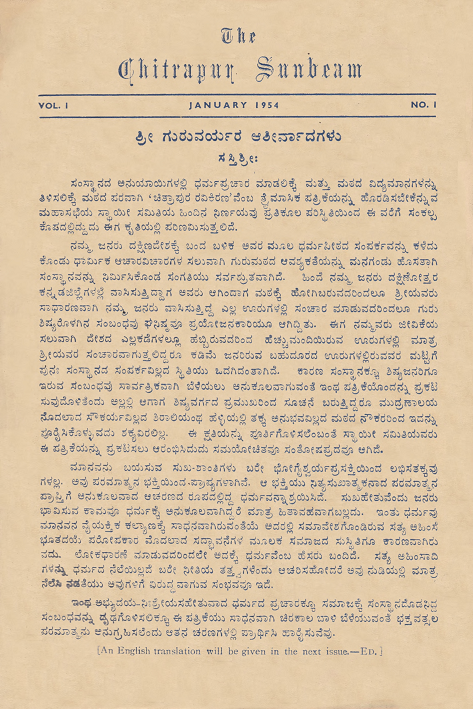 BLESSINGS FROM HIS HOLINESS

The previous decision of the Standing Committee of the Mahasabha to start a quarterly magazine named the Chitrapur Sunbeam on behalf of the Math for the propagation of Dharma amongst its followers and the communication of Math news, which had hitherto, on account of unfavourable conditions, been in the shape of a plan, is now being translated into action.

The fact of our people having lost touch with their original seat of Dharma after migrating to the south of the country, having realised the need for a Guru-Math for the regulation of conduct and thought in religious matters, and having newly established a Math, is within the knowledge of all. Formerly, when our people lived in the South and North Kanara Districts, as they were visiting the Math from time to time and as His Holiness was also generally touring in all towns where they were residing, the connection between the Guru and disciples was both solid and beneficent. As our people have now, for the sake of a living, spread to all parts of the country, although the tour of His Holiness covers places where there is a large population, a condition has again arisen in which there is no touch with the Math so far as residents of far-off places with a small population are concerned. Hence, although suggestions were coming from leaders among disciples here and there and now and then, that it would be good to publish such a magazine in order that the connection between the Math and its disciples might universally grow, it was not possible to achieve this at a village like Shirali which had no printing press and other facilities, and through the Math’s employees who had no suitable experience, That the Standing Committee has started the publication of this magazine as if to supply this want, is both timely and satisfactory.

The happiness and peace which man desires are not obtainable by application to mere enjoyment and wealth. They are to be secured by devotion to the Paramatman. That devotion follows Dharma which is in the shape of conduct conformable to the attainment of the Paramatman who is an embodiment of eternal bliss. Even the fulfilment of desire, which people believe to be the cause of happiness, can be beneficial only if it accords with Dharma. Dharma, while it is thus a means to man’s individual happiness, is also the cause of the well-being of society through truth, harmlessness, compassion to living beings, doing good to others and other wholesome ideas comprehended in it. Only because it supports the world, it has secured the name of Dharma. If truth, harmlessness, etc. are sought to be practised as mere ethical principles and without the foundation of Dharma, there is the probability that they will remain only in speech and our conduct may be at variance with them.

We pray at the feet of the Paramatman and hope that He may bless that this magazine may be a means of propagation of such Dharma which is the cause of prosperity and the highest good and of strengthening the relations between the society and the Math, and that it may live and grow for a long time.

A brief history of the Chitrapur Sunbeam

Today, The Chitrāpur Sunbeam continues to be the mouthpiece of the Mat͟h and plays an important role in keeping the community in constant touch with the happenings at the Mat͟h, and provides interesting, and enlightening reading for its dedicated readers.  A children's section, "My First Little Sunbeam” was added in 2002 and has quizzes, poems and many interesting stories which familiarise children with our culture, traditions and values.

As a tribute to this iconic Institution of The Chitrāpur Sāraswat-s, we bring you the very first editorial penned by its founder Editor, Shrī H. Shaṅkar Rāu, as published in January 1954. 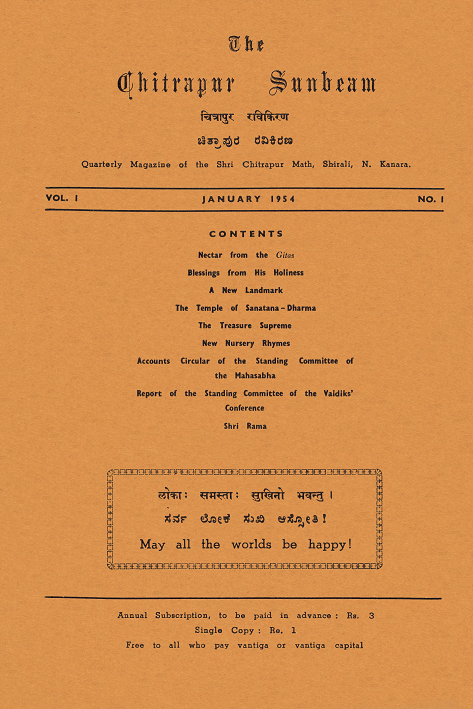 The Chitrapur Sunbeam is emerging with the blessings of His Holiness. It is an organ of the Shri Chitrapur Math. Its objects are the propagation of Dharma and the publication of Math accounts, news and notes. It will be a means of periodical contact between the Math and the little Community which created the Math. The Community is more scattered now than ever before in its chequered history : nearly 17,000 souls spread over some 350 places. Hitherto the Math and its line of Gurus were the great unifying influences. To these, is now added the Sunbeam. Its light should be welcome in every Chitrapur Saraswat home. It will give its light without any heat. It will keep in view the Light of all lights, the common Source of all. And it will not engage in controversies of any kind.

With the limited finance available, the Sunbeam will be only a quarterly for the present. For good reasons, it will not go in for advertisements or publish photographs. The matter for the year will be of the order of 120 pages. The January issue, which embodies the accounts, will naturally be the biggest one. In future years, this will include a useful Directory of all sisters and brethren who have paid vantiga or vantiga capital. The remaining issues, though smaller in size, will provide larger scope for propagation of Dharma.

In 1708, the Community was blessed with its first Guru. In 1915, the eighth Guru entered Mahasamadhi. In the two centuries which intervened, propagation of Dharma could not possibly take place on any considerable or organised scale. The eighth Guru published books on Devatarchana Vidhi and Sandhyavandana, and a book entitled Balabodha was also prepared by Shastri Kaikini Subraya Bhat and published by the Math in his regime. Occasional discourses and kirtans by the Math’s Shastri and others were arranged during his tours and the Car Festival. But all these activities were confined to Kanara where most of our people lived in those days.

It was in the time of the present Guru that movements of population from Kanara took place on a large scale, and he personally undertook the work of delivering discourses. He has already delivered literally hundreds of them, mainly in Konkani, but occasionally in Kannada, Marathi and Hindi. English summaries of 31 of these were published at different times in Math Supplements to the Kanara Saraswat and later brought together and republished in book form in the Shrimat Anandashram Ordination Jubilee Souvenir published in 1941. The Sunbeam will hereafter play its part in the broadcasting of such discourses. There will be other useful matter as well to the extent which space permits. And brethren, sisters and children alike will find something of interest to them.

In this work, both language and script present difficulties without number. A large section of the Community cannot read the Nagari script, another cannot read Kannada, and yet another English. To add to the trouble, the spelling of Konkani, which has been mostly spoken and seldom written so far, is anything but settled. But what are difficulties for if they are not to be surmounted ? Experience will guide.

Lastly, a word about this editor. He is a singular person. And, being singular, he cannot be plural. So the editorial “we” is out of the question for him. Secondly, though he may be somewhat keen on serving the Math and the Guru, he has not, of late, been growing exactly younger with the years. And thirdly, from the point of view of true knowledge and experience, he is a poojya—not a worshipful figure by any means, but a complete cipher. So, with folded hands as ever, he bows down to one and all and craves their blessings.

You can receive the Sunbeam every month through your life time for a nominal subscription of Rs 500/- only, for those in India. 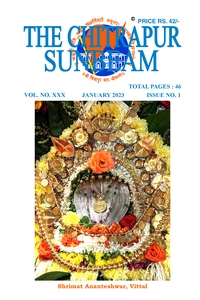 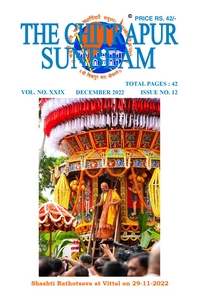 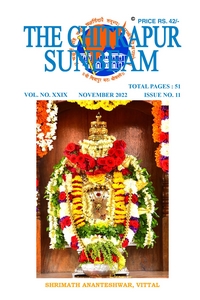 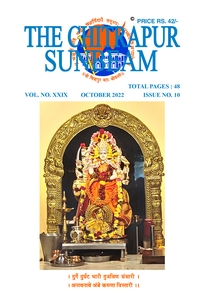 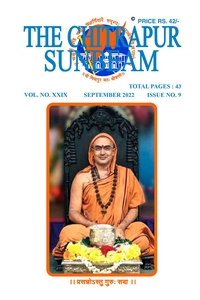 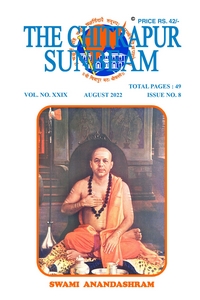 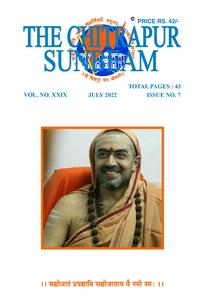 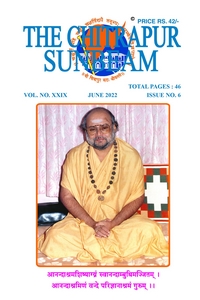 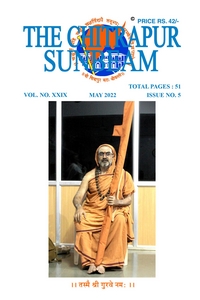 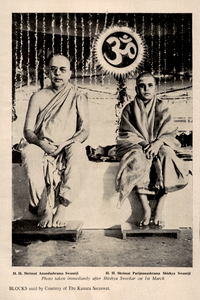 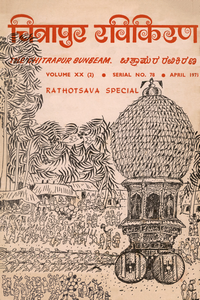