were the three magic words uttered by Parama Pujya Parijnanashram Swamiji III when He bestowed mantra-deeksha upon a fledgling initiate who had no idea of how that Blessing would one day open joyful avenues of sadhana and seva under the loving Guidance of our present Mathadhipati Parama Pujya Sadyojat Shankarashram Swamiji. Asha Awasthi’s frank and in-depth narrative is sure to inspire many sadhaka-s to discover the manifold joys and fulfillment seva gifts...         (October 2019)

“One need not go in search of a Guru in life – when the time  is right, the Guru will find you”....How true! .  I had been fortunate to receive mantra-deeksha from our Parama Guru- Parama Pujya Shrimat Parijnanashram Swamiji III. It was in 1973 at Mumbai where I, a newly married 21-year-old, went to take mantra deeksha from our Parama Guru at Khar Math; not because I was ‘ready’, but because the elders in the family suggested I should. It was a very formal meeting with no conversation except repetition of the mantra and a very reassuring “Devu baren koro” from Pujya Swamiji in a voice full of love. Unfortunately, after this I only had Darshan of Guru Swami when I went to pay my last respects at Khar Math after His Mahasamadhi.. But the impact of His Presence and those three words stayed with me through the years alongside a dull pain at having missed Sadguru sannidhya.

Having married outside the Bhanap community, I was away from our Math busy tackling the vagaries of a mundane life. Settling down to live alone in Bangalore in the year 2000 after the sudden demise of my husband, I was depressed with neither a purpose nor a clear direction in life. I was only an occasional visitor to our Math, receiving tirth from Parama Pujya Sadyojat Shankarashram Swamiji during Their visits to Bangalore and attending the Swadhyaya/Ashirvachana-s.

Raw as I was, I remember my uneasiness for not having carried a notebook and at the same time, unsure of whether taking down notes was ‘allowed’. I remember writing down some words on the prapatra of the simple but deep ‘Shiva-Guru-stotram’, almost surreptitiously, for fear of forgetting what seemed like a ‘heavy dose of Vedanta’! But The Guru-Vani had kindled a thirst and I made up my mind to do a systematic study of Vedanta. We were brought up in times when ‘implicit obedience’ to elders was the rule and any kind of questioning was forbidden. As a result, in spite of this ‘firm’ resolve, my conditioned mind took three years to muster up courage even to speak to Pujya Swamiji and seek His Anumati and Guidance !

In 2008, fresh from the divine experience of the Guru Jyoti Pada Yatra, something stirred within and I volunteered for the first time during Pujya Swamiji’s Chaturmas at Bengaluru Math – cutting vegetables to the melodious accompaniment of bhajans, I was humbled - struck by the devoted seva being offered almost round- the -clock by many senior volunteers.

Then, during Swamiji’s visit in June 2009, suddenly out of the blue, Deepak Ugrankarmam called and I must have given him quite a shock by asking who he was !  I was asked to come for a meeting with Pujya Swamiji. My heart fairly leapt with joy but it was also a bit fearful ....almost like a student getting called by the Headmaster !  Once in the Guru’s Presence, however, I was put at ease very soon by Pujya Swamiji  who must have known my utter lack of preparedness. The Divine had stepped in to take charge of my life henceforth, though I was blissfully unaware !  In retrospect, it is evident that the Guru had been with me all along, known the vacuum in my heart and at the opportune time, drawn me into His Fold !  In spite of my inexperience combined with a high degree of nervousness I was allotted work related to the project Anandashraya.

Thus began a journey fraught with the usual ups and downs in a totally unknown territory - a journey which was both external and internal and which gradually revealed many lessons beginning with the very meaning of seva . What I thought was social service for helping the Institution actually turned out to be sevana for the purification of my own contaminated being !

As the chiselling by the Divine Sculptor progressed, there were many wonderful moments of sudden revelation and some not - so- wonderful as well. There was the joy of learning, making new friends and accepting unforeseen responsibilities.. for most of which I was not really ‘qualified’ in the technical sense.  But then one learns to accept whatever comes from the Guru with a steadily growing conviction that lack of qualification may indeed be the biggest qualification in Guru-kshetra !  All one needs is a willingness to learn and faith that whatever comes from the Guru, will get done in spite of me and my not-so-confident mind.

There is a vast range of ‘hands- on’ learning to get involved with,  be it participating as an Office Bearer of the Local Sabha Committee – planning, organising and ‘fire-fighting’ during Pujya Swamiji’s visits, collecting Vantiga, coordinating various activities and initiatives like Anushthana-s, Vimarsha, Ninada, simple yoga or warm- up exercises at different venues of the Math, writing reports, learning the use of diacritical marks, Bhashya Pathan, editing documents and manuals, working on Math publications, doing bhajan  seva or putting up cultural programmes, serving food, participating in Shivir-s organised for youngsters, NRIs or Girvanapratishtha and so much more. The opportunities are endless and so is the learning. 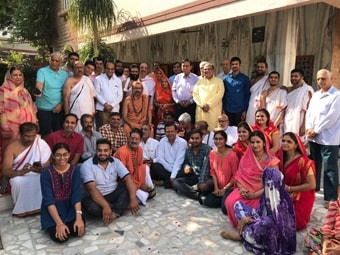 My interest in Vedanta pushed me to learn Samskrta – the divine language of our shastra-s. I entered into Aradhana with a lot of hesitation but the enchanting beauty of the language itself proved so inspiring that the homework and tests were all taken in stride joyously! Admittedly, I let it go for a few years after that. But the Guru keeps a vigilant eye on each and every volunteer’s progress, creating opportunities and not allowing any stagnation to creep in. Again, it took a nudge from Pujya Swamiji to make me enrol into and not only complete the Sadhana and Dharana levels but continue my journey with Samskrit by taking on Aradhana  students !

In fact, since entering into seva, each day one seems to run against time trying desperately to prioritise and balance personal and seva activities and at the end of the day, falling into bed with healthy fatigue and a wonderful sense of satisfaction and fulfilment. It is difficult to imagine that there was a time earlier when each day used to hang heavy on my hands, or get wasted away in inconsequential worthless activities very often leaving a residue of restless hankering for something better, or more purposeful to do! 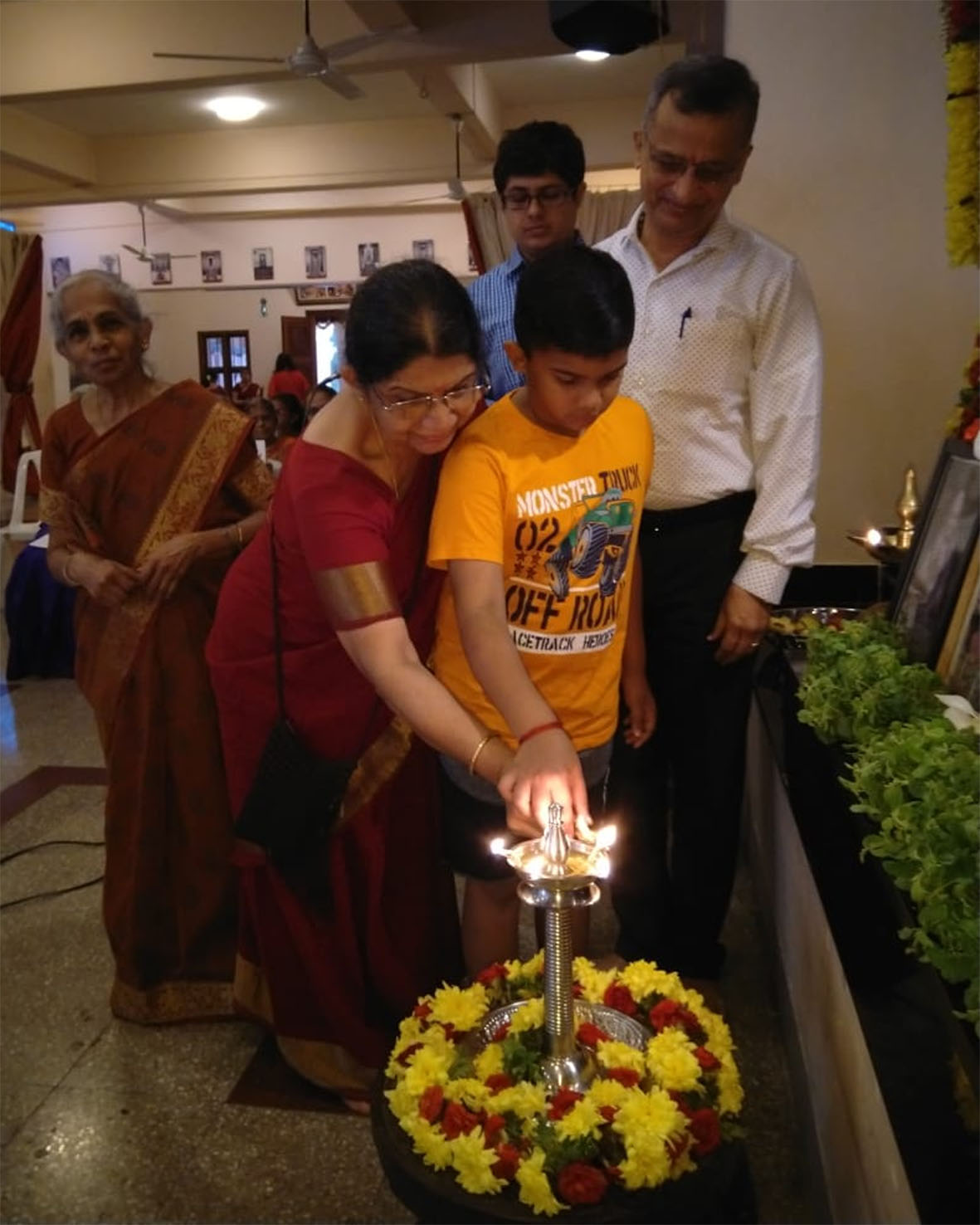 However, the journey is certainly no bed of roses !  There was the pain of making mistakes small and grave, getting warnings and being pulled up. Gradually, one realises that corrections made by the Guru in no uncertain terms, are in fact His Protection to save me from my own foolish self ! The Guru is a hard taskmaster but one learns to hang on realising that He is even harder on Himself ! All He wants is to turn you towards the right direction for self-discovery. The choice is yours, of course.

Admittedly, you tread alone on this path but there is no cause for fear at all because, very soon, you realise that the Guru -Shakti has been walking alongside, not only guiding you but protecting you from certain onslaughts of negative prarabdha even before they hit you !

Although this is a journey that each sadhaka takes on alone, the ever- compassionate Guru provides ample company on the way. Fellow sadhaka-s with whom you share your living and working space, throw light on their own as well as your latent strengths and efficiency and also reveal the ‘cleverly’ concealed weaknesses and deficiencies. One learns to handle all of it in good spirit and thereby, move ahead.

As you progress in seva, team- work and variety become immense opportunities provided by the Guru for one’s growth – you gradually discover that all that was considered ordinary once, has suddenly taken on a spiritual flavour.  Petty jealousies and criticism give way to immense tolerance and mutual admiration.  Competition drains away while supporting each other takes precedence.  In the Gurukshetra, you realise, there is room for anyone and everyone. The immense respect that is generated towards the Guru is then not just immature adoration but a firm awareness about His leading you every inch of the way....

Nothing is advocated by the Guru which has not been practised or experienced by Him first, to be then administered to devotees with  an overwhelming love, compassion and generosity !This Inspiring Presence is the best inheritance that every Chitrapur Saraswat is born with -  a divine opportunity to be led unto Divinity by Divinity Itself !

" In the  Guru-kshetra there is room for anyone and everyone"