Prachar literally means to ‘spread’. From ‘parichay’- introduction to ‘prachar’, the Sanskriti Shibir in Pune has definitely come a long way. Held from October 21- 26, 2008, this Shibir had the perfect combination of indoor and outdoor activities, so as to bring out the best in each one of the Shibirarthis while ensuring total fun all the way. 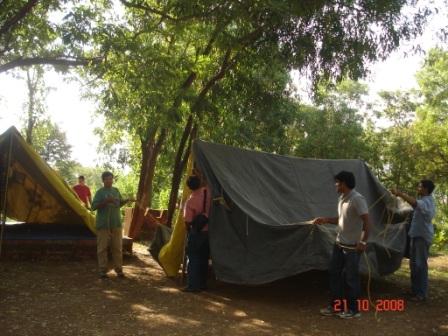 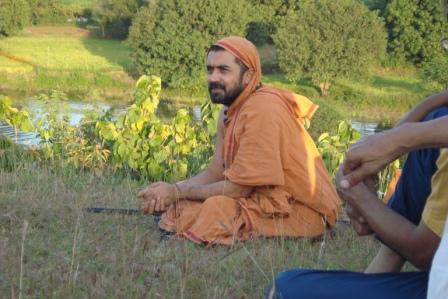 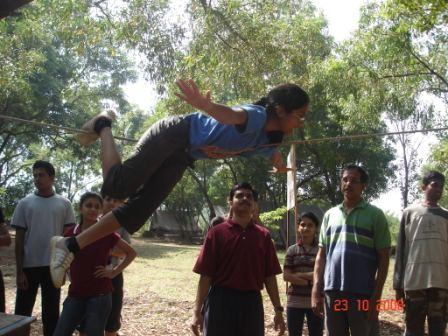 Prachar literally means to ‘spread’. From ‘parichay’- introduction to ‘prachar’, the Sanskriti Shibir in Pune has definitely come a long way. Held from October 21- 26, 2008, this Shibir had the perfect combination of indoor and outdoor activities, so as to bring out the best in each one of the Shibirarthis while ensuring total fun all the way. Many a lesson to be learnt but what better way than to play and learn, so as to etch these learnings deep in our minds and hearts for years to come.

‘Youth today, pillars of tomorrow’! How rightly expressed as all the Shibirarthis, the young enthusiastic future of our community participated in this 6-day shibir. The ‘Maitreya Shibir Parisar’ at Khanapur, on the banks of the beautiful river Mutha- away from the hustle-bustle of city life, this serene camping spot awaited us as we eagerly looked forward to having a gala time. Our small group of 23 keen Shibirarthis, 7 dedicated Sanchalaks, and a trainee Sanchalak came together as a family to learn, share and contribute not only to the Math and the community, but also to ourselves.

The Sanskriti Prachar Shibir (SPS) ignited in all of the Shibirarthis a sense of deep pride to be an ‘Amchi’, created an awareness as to our roles, contribution and duties as an individual towards the welfare of the community and the world. The shibir handed out the baton of ‘prachar’ to each of the Shibirarthis to take ahead and spread the word to make a difference in their own way.

Grouped into four tolis (groups), named after the stars- Kritika, Rohini, Punarvasu & Dhruva, this galaxy of young stars shone through their journey in the shibir. Imbibing lessons at every point, the tolis performed seva in the form of service (food), indoor and outdoor assistance and toilet cleaning readily with fun and gusto.

Indoor sessions on our Guru Parampara instilled a deep sense of gratitude and awe amongst the youth as they presented major events in the lives of our dear Swamijis in the form of short anecdotes from a storybook. The presentation on the river Saraswati and our heritage, took us back to our roots. The re-generation of Saraswati being a major point of discussion, shibirarthis spoke passionately about this river and how they could contribute in their own little way for the revival of its holy waters.

‘Change is the only permanent thing in the world’. The vicious circle of change and choice was stressed upon by renowned speaker Mr. Lokhandwala, who captured the young minds with his interesting games, also stressing on the importance for us youngsters to incorporate change into our lives regularly. Talk on Hinduism by Bala Srinivasan maam stirred the inquisitive minds of the youth and encouraged the Shibirarthis to empower their knowledge base so that they could stand up for their religion in future.

Inhibitions towards dance and movement to rhythm were shed by all Shibirarthis as they participated in the dance workshop. Using ‘Shapes’ as their main presentation, they experimented with forms and choreography. Shailaja Gangulypachi enchanted everyone with her clear diction and pronunciation and highlighted the secrets of good communication both oral and written.

The outdoor activities would have been very tiring and strenuous, if not for the daily physical exercise session. The day started as early as 5.30am in the morning and the ‘lights-out’ call was at 10.30 pm every night. The entire experience of living in tents pitched by shibirarthis themselves was like the icing on the cake. All the activities were carefully drafted and the alternating outdoor and indoor activities throughout the day kept the spirits high. The ‘Vimarsha’ conducted was for many Shibirarthis, a first of its kind and the information that was churned out was incredible. Every Shibirarthi contributed to the topic with their own experiences as well as understandings.

The quiz held was a culmination of all that was learnt in the course of the shibir with a dash of ‘Amchi’ vocabulary and humour. The challenges put forth in the outdoor games, fostered team spirit and the players came forward with creative ideas to solve each problem. Leaders evolved with the varying demands of each situation. Each game was based on the effective application of forming, storming, norming and performing. Lessons learnt on the playfield were analyzed and interpreted in the indoor sessions- a wonderful combination of practical and theory.

The outdoor Burma Bridge and Rope Work session conducted by trained personnel from ‘Pune Venturers’- Sthavan Jadhav and his team, helped the young Shibirarthis get over their fears and enjoy the ‘monkey crawl’, ‘commando crawl’, Burma bridge and other rope walks. Shibirarthis helped and cheered each other as a team to overcome their fears and enjoy the session heartily.

The camp fire and the entertainment program that followed was another memorable event in the shibir. The good experiences at the shibir were highlighted with the delicious food that was served throughout the day.

What each one takes back from the shibir is important and one thing was certain, the shibir had started an intense thought process- ‘How can I contribute?’ amongst the youth. The young shibirarthis were like wet clay which were readily being moulded by the learnings and teachings at the shibir on the wheel of time, experience and guidance. What emerged were beautiful pots of different sizes, each having tested their knowledge, culture and roots. The sapling of ‘prachar’ has been planted into each of these young minds, to nurture and grow over time.