If you do not know Sanskrit and yet discover joyfully that you can  understand many words in the text below, it is because Sanskrit is the treasure-house of all the root-words from which many regional languages have arrived at their individual vocabulary. A day-long Shivir was held recently in Mumbai to enable students to sharpen their conversational skills in Sanskrit. Presenting Sheetal Chandaver's report on the stimulating event in flawless DEVABHASHA            (August 2019)

Have you ever sat in a classroom where talking is a ‘must’? If your answer is ‘No!” then you have not attended a lively Sanskrit - Sambhashan class as yet. Shri Chitrapur Math’s Girvanapratishta is a vibrant movement initiated by our Beloved Mathadhipati - Parama Pujya Sadyojat Shankarashram Swamiji to encourage sadhaka-s to learn this Devabhasha and then, speak in  it as well. Sujata Masurkarpachi gives a detailed report on an extremely interesting day-long shivir held in Mumbai recently by some of the  dedicated Sanskrit teachers of Girvanapratishtha

Every year Girvanapratishtha conducts a Sanskrit Sambhashan Shivir in Shri Anandashram, Khar Math. This year it was held on May 1st, which is a holiday and therefore, there was an overwhelming response from all new and old students of Sanskrit. Whatsapp is also a boon today  to reach  out to many  people and inform them about any programme.

On Wednesday, 1st May everyone assembled at Khar Math before 9.30am and completed the formal registration. We were allotted a batch with our name and a name of the group we belong to. There were 4 groups named after the holy rivers, Ganga, Yamuna, Godavari and Saraswati with 4 different colour-tags. The volunteers at the registration desk were Kavita Karnadpachi and Smita Nagarkattipachi. After that formality was completed, all of us enjoyed a delicious breakfast of idli-chutney, pineapple shira and tea/coffee.

Exactly at 10 am, as per the schedule, the shivir started with the Sabha Prarambh Prarthana and Girvana Geetam sung by Vaishali Koppikar pachi and Kanchan Honnavar pachi. 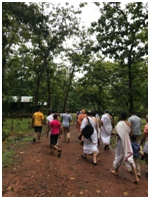 Then the main organiser, our erstwhile chief-coordinator Sujata Haldipurpachi welcomed all lovingly and told us how all the Swamijis of our Parampara loved  Sanskrit and had mastery over it and also how our present Mathadhipati Parama Pujya Sadyojat Shankarashram Swamiji is keen that all of us should learn Sanskrit.

Vaishali Koppikarpachi did the sutra-sanchalan for the entire programme. She asked all shivirarthi-s to, turn by turn, introduce ourselves in Sanskrit.

After this Padmini Balsekarpachi organised an interesting game called ‘Upanaam-Gram-naam kreeda’. She read out each description in short in Sanskrit and we had to find the State, City, Place in Maharashtra or in the suburbs of Mumbai, (one round of each). For example Vishaal Desh referred to Maharashtra, Vahanam Aanayatu was  Karla (Car La, did you get that?), Santosh Nagaram was Ulhas Nagar etc. The 4 groups had been created earlier with such games in mind. We really enjoyed this game very much!

At 10.45 am Ravindra Shiralimam explained in lucid Sanskrit and English, the meaning of select shloka-s from Ganga Lahari by Mahakavi Jagannath, and he also told us about how he was devoted to Ganga and considered Ganga as most sacred and above all the Gods and how, finally, She absorbed Kavi Jagannath in her pravaaha at the end of the 52nd verse.

News-time was at 11.45am. Sheetalpachi Chandavar gave the fortnightly news in Sanskrit in a clear voice. The programme was called ‘Vaartanshaha’. She made it so interesting by showing slide shows on the projector and creating an atmosphere of T.V. news by inserting sound bytes between every two segments of news. In spite of having a lot of technical difficulties, she managed to do it successfully and everyone simply loved it.

After the news in Sanskrit, Sujata Haldipurpachi  sang our favourit ‘Pathata Sanskritam’ and all of us sang after her. Another interesting game called  ‘Koham?’ was then conducted by Shrikala Kowshikpachi. (This was to be conducted by Sona Chandavarkarpachi but she could not attend due to some unavoidable reason). The game moved in this fashion-in a small box there were chits with names  like Rama, Krishna and Arjun and so on, written on them. Like passing the parcel, that box was passed on to the next person to the sound of a manjiri .  When Durgapachi Kumta would stop the manjiri-sound, then whoever was holding the box,  would pick up a chit and explain in Sanskrit the description/ attributes of  the person mentioned in the chit, without disclosing the name, so that the answer could be guessed by the audience. All were eager to answer and we had a lot of fun!!

Then it was the time for a sumptuous lunch of amras- puri, fruit sasam and other delicious curries ending with a very  nice mukhavaas.

After this tasty meal, all of us may have dozed off,  if the next programme  was a lecture. But the organizers had wisely planned to conduct another lively game named ‘Kandol kreeda’. This  was held in the open for the next half- hour and conducted by Varada Savkur pachi who was assisted by Vidya Yennemadi pachi, Durga Kumtapachi, Padmini Balsekarpachi  and Sangeeta Pawarpachi. In this game they had kept various items in four baskets for the four groups. The names of the items were explained in Sanskrit by Varadapachi. Each group had approximately 20 members. Each member of a group was given a number . When a particular number was called out, the person having that number from each group had to come and stand in a row and then run to fetch from their group’s basket the item that was called out. Since the competition was all about who will reach the destination first to get marks, all of us enjoyed running back with swadu moolam (carrot), jambeer (lemon), palandu (onion), kandook (ball) and so on and on! We were all laughing and clapping non-stop. So Nidradevi left us and we were fresh to listen to the next session on a topic that  is dear to all - a talk on  Rathotsava by Krishnanand Mankikarmam.

Krishnanand mam explained all aspects of Rathotsava, its history, importance, spiritual meaning, why it was stopped and how it was started again in 1973 with Gurubhakti by Parama Pujya Parijnanashram Swamiji (III). All of this was narrated first in Sanskrit and then in English with a few pictures. He also explained the shloka written on the Ratha.

After this illuminating talk, it was game-time again! This time the kreeda was ‘Geetani/Vignyapanani’ by Durga Kumtapachi. This was to recognise the song explained in Sanskrit and then to sing that song with Sanskrit lyrics; so also with the commercial advertisements. All of us enjoyed this thoroughly!’ 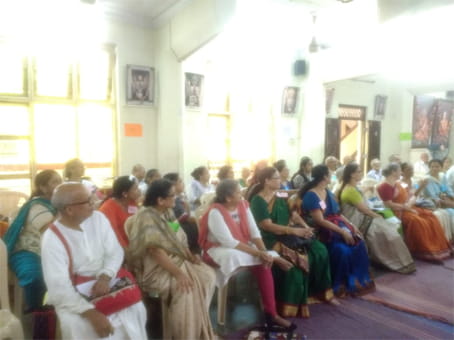 At 3.30 in ‘Katha kathan’,  Sangeeta Pawarpachi told an interesting story of an elephant and a pig in simple words, asked us questions  about the story and its moral. By then, we had all turned into eager schoolchildren lifting our hand and wanting to answer a question before the rest of the class did! In fact, this happened during every game that day.

Now the Shivir was coming to an end! All Subhashitani in Sanskrit contain some message, or a pun, or some humour. Vaishalipachi selected three beautiful Subhashitas and explained their meaning nicely and made the session really interesting.

Last, but certainly not the least, was a patriotic song ‘Priyam Bharatam’ sung by Kanchan Mannige, Shailaja Gangolli and Sujata Masurkar pachis which was repeated by all with the help of the copies distributed to everyone in advance.

Finally, the success of the day’s Shivir was offered at the Lotus Feet of our Guruvarya with reverence and the Shivir came to an end with everybody chanting the Sabha Samapti Prarthana. Of course all of us had a heartwarming cup of  tea/coffee with biscuits, and wafers to nibble, before leaving.

Nobody knew how time had really flown past. All the Sanchalikas had taken a lot of trouble to teach Sanskrit through a variety of programmes like fun-filled games, interesting lectures, informative news reading, beautiful songs, making the entire Shivir rasamaya. Now we are all waiting for the next Shivir!!