The Yuvadhara Sammelan 2018, conducted from 11th to 13th of August at Shirali felt like a breath of fresh air for the 26 yuvas present.  That weekend at Shirali was also blessed with perfect weather – punctuated by intermittent monsoon showers, making this divine experience an absolute delight!

The Yuvadhara Sammelan started with Deepaprajwalan by Narayan Mallapur mam, Bhavanishankar Kailaje mam, Chaitanya Gulvady mam and chief co-ordinator of Yuvadhara - Aditya Chandavarkar. Then, a creative, introductory icebreaker was conducted by Maithili Padukone for all the yuvas and sanchalaks. Each of us had to introduce and describe ourselves using five adjectives starting with the alphabet we had picked. We also had to talk a little bit about our family, hobbies, education and career. This motivated us to put on our thinking caps, thereby setting the tone for the Sammelan. We were then briefed by Aditya Chandavarkar on what to expect in the next few days.

Later that afternoon, we were taken around the Vocational Training Workshop started by Harin Hattangadi mam. Here, Dilip Basrur mam informed us about the work done by the talented students of Standards 8 and 9. The workshop area was customized by the students with things like table, chair, extension boxes, book shelves, wall units all of which they had made themselves! These were either proudly displayed as a part of the décor, or actively used in the workshop. The articles varied in form, function and shape revealing the expertise of a steady hand and the skill involved. Dilip mam also told us about the ease with which the students used the different equipments and power tools. Most of the things were fused together using finger joints, made by cutting a set of complementary rectangular cuts in two pieces of wood which were then glued together without the use of screws or nails (as seen in fig 1).We were not only inspired by the variety of articles made by the enthusiastic young students, but also by the neat and systematic way in which the work-in-progress, their tools and equipment were displayed. All of us were keen to be mentored so we could learn these skills from them. 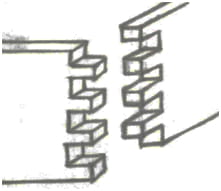 We also visited the state-of-the-art Kala Art Gallery where artwork done by the students of Srivali High School was exhibited. The finesse and keen eye for detail showed the creative calibre of the students.

The Ashtanga Yoga session which followed was conducted by Varun Mallapur, who showed us some stretches and asana sequences.This energized and refreshed us, driving home the importance of exercise in our daily routine. We were later able to watch Parama Pujya Swamiji performing Shiva Pujan. Yuvas then participated in the Ashtavadan Seva with bhajans and Ashtak.  The first day of the Sammelan lifted our spirits greatly  and we could not wait to see what was in store for us on the following day.

The 12th of August was crammed with activities that had us on our feet, right from the word ‘Go’. The day started with all of us prostrating at all the Sannidhis in the temple and then attending the Suprabhatam. A breathing technique called Ninaada was taught by Meera Balsaverpachi, followed by a short session of Ashtanga Yoga by Varun Mallapur. After freshening up, the yuvatis assembled to participate in the Devi Anushthana conducted by Maithili Padukone and Sanjana Hervatte and the yuvakas for the Sankshipta Sandhyavandan conducted by Chaitanya Gulvady mam. Parama Pujya Swamiji took a Swadhyay on the stotra ‘Shrishivameedestavaratnam’ and connected this to our daily sadhana. Swamiji also guided us on how japa should be done and stressed on the importance of doing it daily .All the yuvas then performed Paduka pujan and sang soulful bhajans. This was followed by the yuvas serving a large number of devotees at the Bhojanshala.

Most young people face difficulties in managing their finances efficiently. Hence, a session on ‘The Importance of Personal Finance and Savings’ was conducted by Ameet Kalyanpur and Pranav Nagarkatti, from the Thane sabha. An interactive presentation illustrated the importance of investing money at a young age, to help provide for a worry-free and enhanced lifestyle in the future. They also screened two short movie clips which portrayed the message in a crisp manner to all the yuvas.

The first half of the Sammelan went off in a jiffy and now, it was time for the most- awaited part –an Interaction with our Parama Pujya Swamiji. The heavy rains did not deter us, as we shared umbrellas to the Dwadashanta Mandiram – Pujya Swamiji’s Kutir. There, Parama Pujya Swamiji graced us with His Divine Presence, and spoke about the importance of Ninaada breathing in our daily lives. We all had ice-cream together, making the evening even sweeter. All of us sang a bhajan led by Dhrutimaan Padubidri, ending the interaction on a memorably melodious note. A wide smile was  writ on every face, as the yuvas left the Dwadashanta Mandiram. Later in the evening Parama Pujya Swamiji performed Shiva Pujan which transported all of us to a  different realm. Everyone retired for the night, after a blissful day of fun-filled activities.

The last day of Sammelan dawned and all of us got ready to start our day practising Ninaada. This was followed by 15 minutes of yoga conducted by a yuva, Omkar Marballi, who demonstrated some sookshma vyayama and suryanamaskar, which stretched and flexed our muscles. An enjoyable and energetic session on the rebounder was conducted by Archana Kumtapachi, who told us the benefits of the different exercises which were ably demonstrated by yuvas- Amit Nagarmat, Deepak Kolke and Ankita Karnad. All the yuvas then tried the rebounder and enjoyed all the jumping and exercises, which readied them for the day ahead.

After breakfast, it was time to do our bit for enriching our environment with tree plantation. Dilip Basrur mam explained the various activities and initiatives implemented by the forest department in the last few years. We walked to the Panchvati forest with enthusiasm and great excitement. 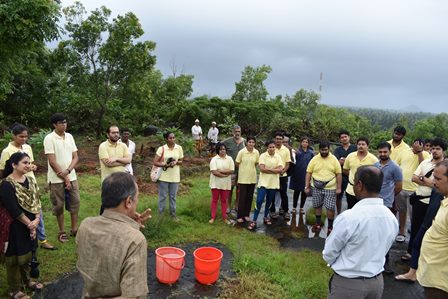 Forest officers addressing the yuvas before the sapling plantation

As we reached the ‘Rock’, we were joined by Ganapati Vaidya mam and Praveen Basrur mam, who had made all the prior arrangements before the plantation started. Pits had been dug; manure, soil, saplings, sand shovels were all kept ready for the yuvas to start work without any delay. Even a heavy downpour did nothing to dampen our spirits. Instead, this seemed like a welcome gift to our small saplings. Planting each sapling was accompanied by loud chants of ‘Namah Parvati Pataye, Hara Hara Mahadev’ and a small prayer that these tender saplings should soon grow on to become huge trees. It was a moment which was going to stay with us for an entire lifetime.

Getting drenched in the heavy rain was like an added bonus for everyone, as the umbrellas took a break. The forest officer who visited us explained the importance of the Western Ghats and how afforestation drives were being implemented by the Forest Department. A break with some mango juice and bananas energized us to go back to work.Definitely, the group picture taken after the plantation would adorn all phones and bring back memories of all the fun and seva!

After cleaning up, a hot Prasad Bhojan awaited us at the Bhojanshala. Then we were taken through a short but engaging session on “Organic Farming” by Tanuja Nadkarni pachi.She shared her farming experience and anecdotes about how she had to handle snakes on a regular basis and even rescue a calf from a well. She also briefly illustrated the various techniques used in organic farming.

With this, the Yuvadhara Sammelan2018 came to an end. As in every Yuvadhara event, time went by in a flurry. The three days gave us an opportunity to meet and interact with our fellow yuvas from different sabhas, while sharing and learning from the different sessions held during the workshop. We are blessed and proud to be Chitrapur Saraswats and will definitely cherish these amazing memories forever.

We thank Parama Pujya Swamiji for giving us this opportunity and we would also like to thank the Yuvadhara Sanchalaks for conducting the Sammelan with clockwork efficiency. 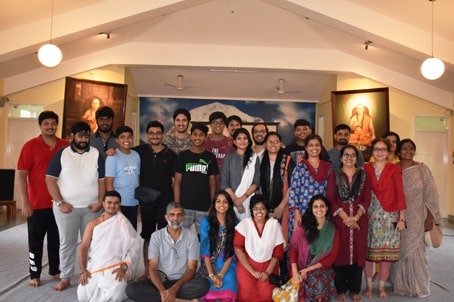 Group Photo at the end of the Yuva Sammelan 2018