The early morning rays of a gentle sun beamed into a packed hall vibrating with palpable, unspoken anticipation. I too waited , not knowing what to expect. Suddenly, I saw the crowd rise, all eyes on the doorway. From my corner of that vast room I saw a figure in ochre walk towards the dais in compact, measured steps.  Climbing up and reaching the low wooden seat with an aasan, the figure turned. The tejas sparking off  an arresting countenance , the piercing gaze that missed out no one, the faint glimmer of a smile - all held a mystical allure that was impossible to define or deny. I felt yanked out of all the frivolous foibles and fancies that had hitherto held me helplessly captive on a ceaseless merry-go-round. I felt I had risen onto a higher plane wherein there seemed to be nothing that would incite need, or greed. I felt I had come home....

The day I was granted the blessing of mantra-deeksha was also the day I had my first real conversation with Pujya Swamiji. Later , I realised rather shame-facedly, that it was mostly one-sided . As all the jagged bits and pieces of my hitherto inconsequential ‘life spiritual’ gushed out like a torrential  waterfall, He simply listened... no comment, no judgment. Swamiji, that is where I learnt my first major lesson...to listen.

Watching a twinkle-eyed Swamiji  enjoy a children’s programme put up during that camp, was an eye-opener about how to pour oneself into the ‘here’ and ‘now’, especially in the company of little ones who lap up the present as if there is no tomorrow. As Swamiji with one smiling gesture indicated to a tiny participant that he should accept his Kit-kat with his right and not left hand, I saw how subtly positive change can be induced in an impressionable mind. No frayed temper, no raised voice, no inciting of hot tears of shame and humiliation. Nothing going out of tune and yet ...a valid point driven home softly, one little child definitely changing for the better.

“I’ll see that you get it,” is what Swamiji said most casually ( I thought), when I said I had neither seen nor read  the  Durga Saptashati . Within 24 hours my uncle who had never lent me a single book made my aunt call me up to tell me that he had bought one which he wanted me to read before he did. Yes, the book I received on the following morning was the yellow volume published by the Gorakhpur Press with the Mother on its cover page gazing into my eyes to ask-”Do you now realise the unbound abundance of Gurushakti?”

Over the years I have seen and heard of innumerable and inexplicable experiences of grateful devotees. There are several incidents in our sacred Guruparampara Charitra as well, wherein the infinite Gurushakti has blessed a devotee in a manner that defies all logic and the present boundaries of science. But our Divine Masters have chosen not to dwell upon these wondrous gifts of Grace which the ‘unschooled’ term as ‘miracles’. For they have chosen not to distract the laity from the real goal- to seek and realize the Absolute within. But Swamiji, these incidents have always brought home the power of the Vani and the Sankalpa of a Realised Soul, an Enlightened Guru...

Only the Durga Kavacham, the Argalastotram and the Keelakam were chanted for the first time in the holy precincts of our kular- Shirali almost 16 years ago. Today, as the devout daily hum of the Navratra Nityapaath further sanctifies the purity at each of Swamiji’s camps, I feel repeatedly awestruck at the colossal effort that has gone into introducing every shlok, every stotram, in de-mystifying the myriad scriptural content through innumerable Swadhyay -s, the deep introspection and self-inquiry stirred at every Vimarsh or Paramarsh. Swamiji , the lesson which has gone home is the need for imbibing discipline, determination and regular application. Only then can this overwhelmed seed of devotion blossom into a strong-rooted and unshakeable conviction called faith.

It is only when we participate with total involvement in a satsang that we experience the unlocking of blocked energy, discover the glorious sense of freedom from every fetter, feel the release of boundless happiness during namasmaran. By introducing this collective bliss to us- overwrought and self-centred ‘megapolitans’, You have made the entire community of sadhak-s feel like a single  global family, Swamiji. ..and in one  Ashirvachan when You told us that even a single stuti, offered with total, one-pointed devotion can be spiritually empowering, hope raised its head again stifling an ugly voice which was saying “you are not doing enough”.

Today, bonding comes easy between complete strangers when volunteering shoulder to shoulder at the serving table, sharing room-space at any Math guesthouse , singing bhajan-s sitting side by side, or doing the garba together before the resplendent Durga Parameshwari.  One incredibly absolute moment of indivisible oneness was experienced by all of us who were present at Karla on that glorious afternoon when Swamiji sang His intensely powerful composition-Bhavanidharahara.. and at the end of it, everyone burst out clapping in sheer joy as if on a divine cue. Swamiji, out of the blue, You showed us it was possible to feel that kind of ecstasy which had no material basis and hence, infinite scope to recall and revel in.....

When a record number of Prarthana-children meticulously perform Guru-pujan; when Yuva-s inscribe “We love you to the moon and back” at the end of a delightful  acapella medley created to commemorate their Beloved Guru’s ‘golden’ Janma Divas; when the lessons offered by Girvanapratishtha motivate students world over to join the open classroom; when all through the year sadhak-s happily rush to Karla to offer a Seva Saptaha , or to perform Sannikarsha; when the ‘Maams ‘begin to  participate regularly in bhajan-seva and do the Gayatri Anushthan in growing numbers  at Swamiji’s camps; when beaming beneficiaries of Parimochana project come  to Shirali Math with baskets laden with produce; when you read about the over-all excellence of the students at Srivali High School or watch the glow of self-assurance on the face of every woman at Samvit Sudha and as the crest jewel -when thousands join Pujya Swamiji on the historic Guru Jyoti Yatra to consecrate the Holy paduka-s and portrait of our tenth Guru- Parama Pujya Parijnanashram III in Shirali, you realize without doubt that the surge of inspiration to follow this Guru came from genuine  remorse for all the injustice our Karunamurti Guru Swami was subjected to and also from the love and reverence devotees of all ages feel for a Master who leads from the front and works tirelessly to constantly improve every aspect and facet of our Maths and our samaj . Swamiji ,how can we not learn the importance of sustained effort when we have a Guru who is hardest on Himself?

In the 12th Chapter of the Bhagwad Gita Lord Krishna says that one of the qualities which endear a devotee to the Lord is cleanliness, purity, tidiness. If you have noticed the beautification and elegant expansion   undertaken at every Math under Swamiji’s vigilant eye, the impeccable orderliness, total concentration and bhakti with which Pujya Swamiji does pujan - as if He is doing it for the very first time-you realize you are watching both a perfect Guru and an ideal Shishya. Parijnan Foundation has been set up by Swamiji to realize all the visions of His farsighted Guru. The utterly sincere and humble manner in which Swamiji attributes every positive happening to His Guru’s Grace is both touching and inspiring.

Swamiji, the gratitude-list will always remain unfinished. But if any seeker is earnestly looking for a bhukti-mukti Pradaata who helps one strive for a body-mind-spirit sync, I can joyfully tell him or her that this search ends at Your Holy Feet. 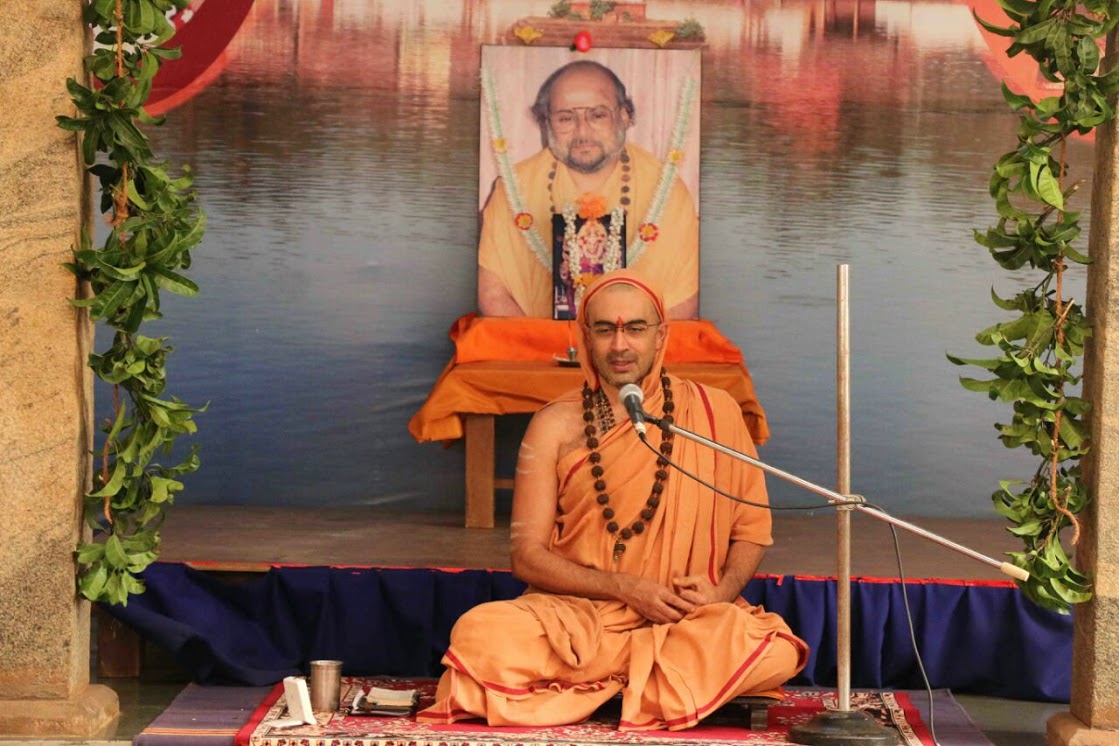 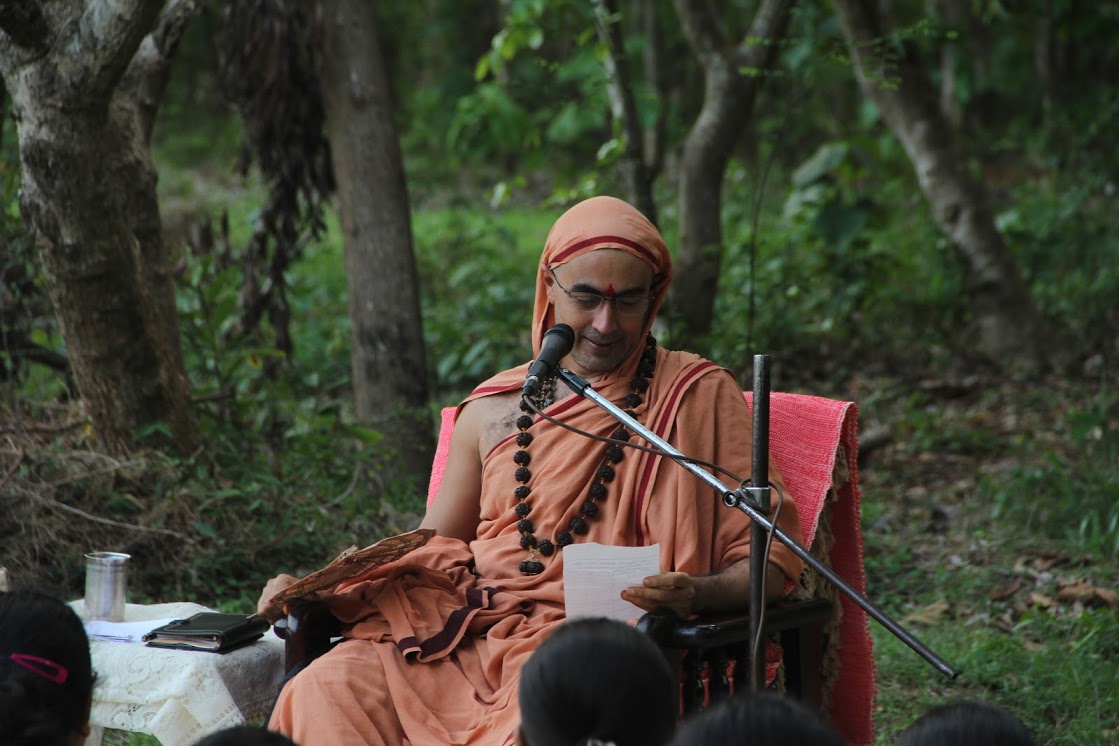 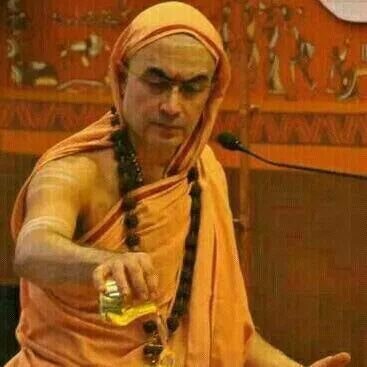 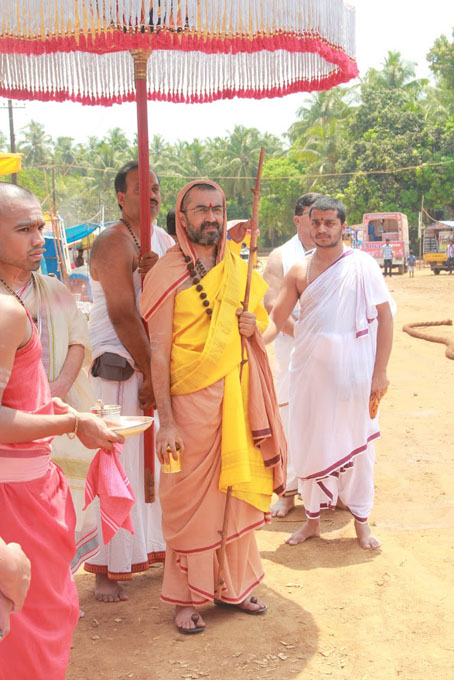