A candid account by VIVEK NADKARNImam -the  Convenor of  Chaturmas 2018- describing both the initial anxiety and then, the strengthening bond he experienced with the Math and his Beloved Guru              Photo credits - Anushravas       (December 2018)

February 14, 2018: After the all-night Shivaratri Pujan by Parama Pujya Swamiji at Hubli, enveloped by the euphoric blissful feeling, just as we were about to drive on to Mumbai, came this unexpected message-”Parama Pujya Swamiji has directed you to be the Convener for the coming Chaturmas 2018". My first reaction was a stunned silence – and the realisation of the magnitude of the task ahead. With no prior experience of even volunteering for such an event, leave alone managing one, would I be able to live up to Swamiji’s expectations?

For the next few minutes my mind was flooded with questions….How and why did we land up in Shirali seven years ago with no apparent material connections with the land – no ancestral property, parents or even relatives living there? Having settled in this holy land, was this is an opportunity to offer my seva to the Math and the Guru Parampara?  Would it take my journey of life forward on a spiritual plane that was so lacking in this material, business world that rules our lives? Should I let go of this opportunity of a closer association with Pujya Swamiji which would help my personal development?

As a student of Physics, a few months ago, I had re-started reading my favourite subject - Quantum Mechanics.  The concepts of wave-particle duality, space time continuum, Chaos theory, Uncertainty Principle had all re-kindled the spark of a long-nurtured interest. Would this be an opportunity for me to get an insight into the spiritual dimension of Quantum Physics on which so much research  is being done these days? ….I knew I had no better choice than to accept this responsibility. 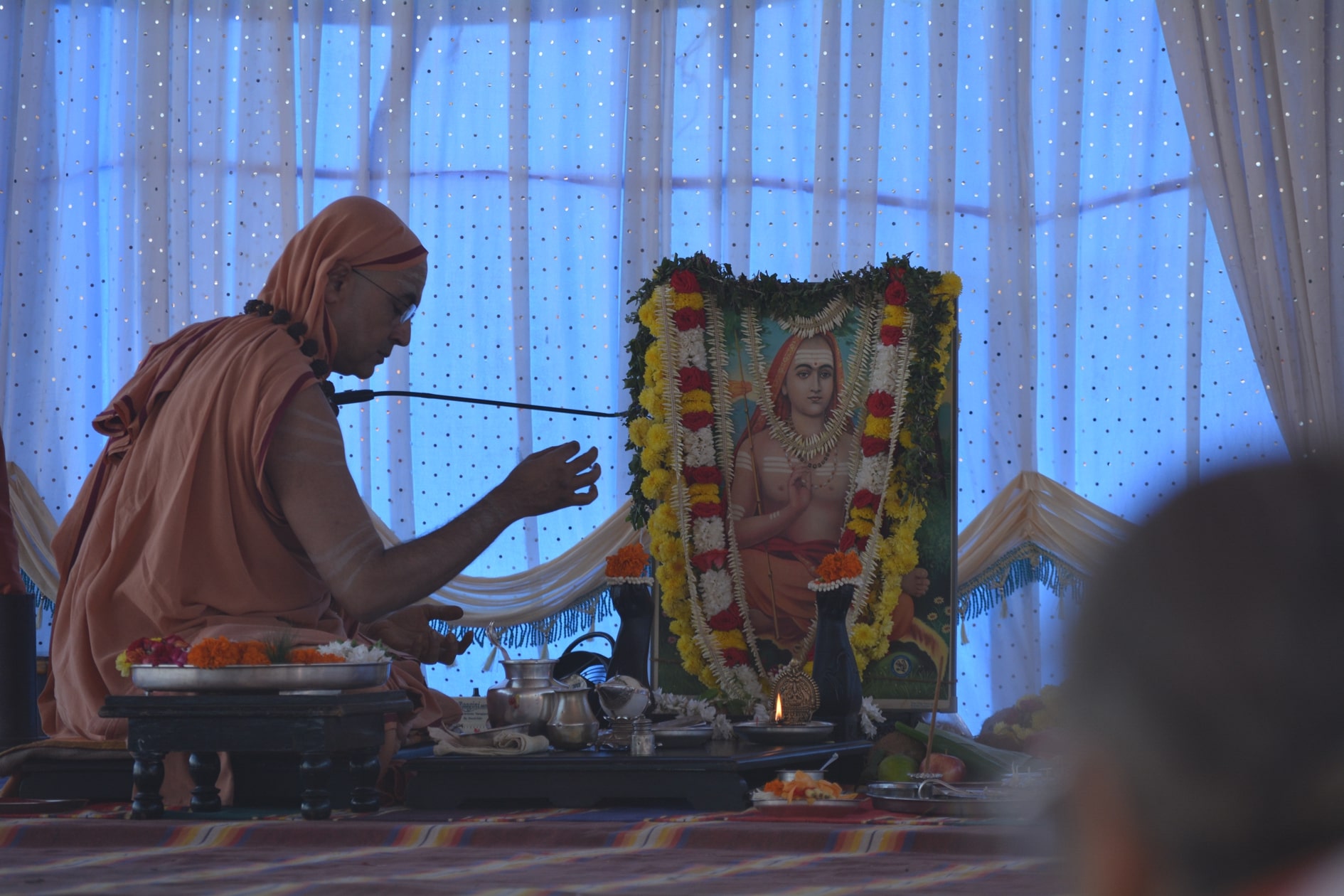 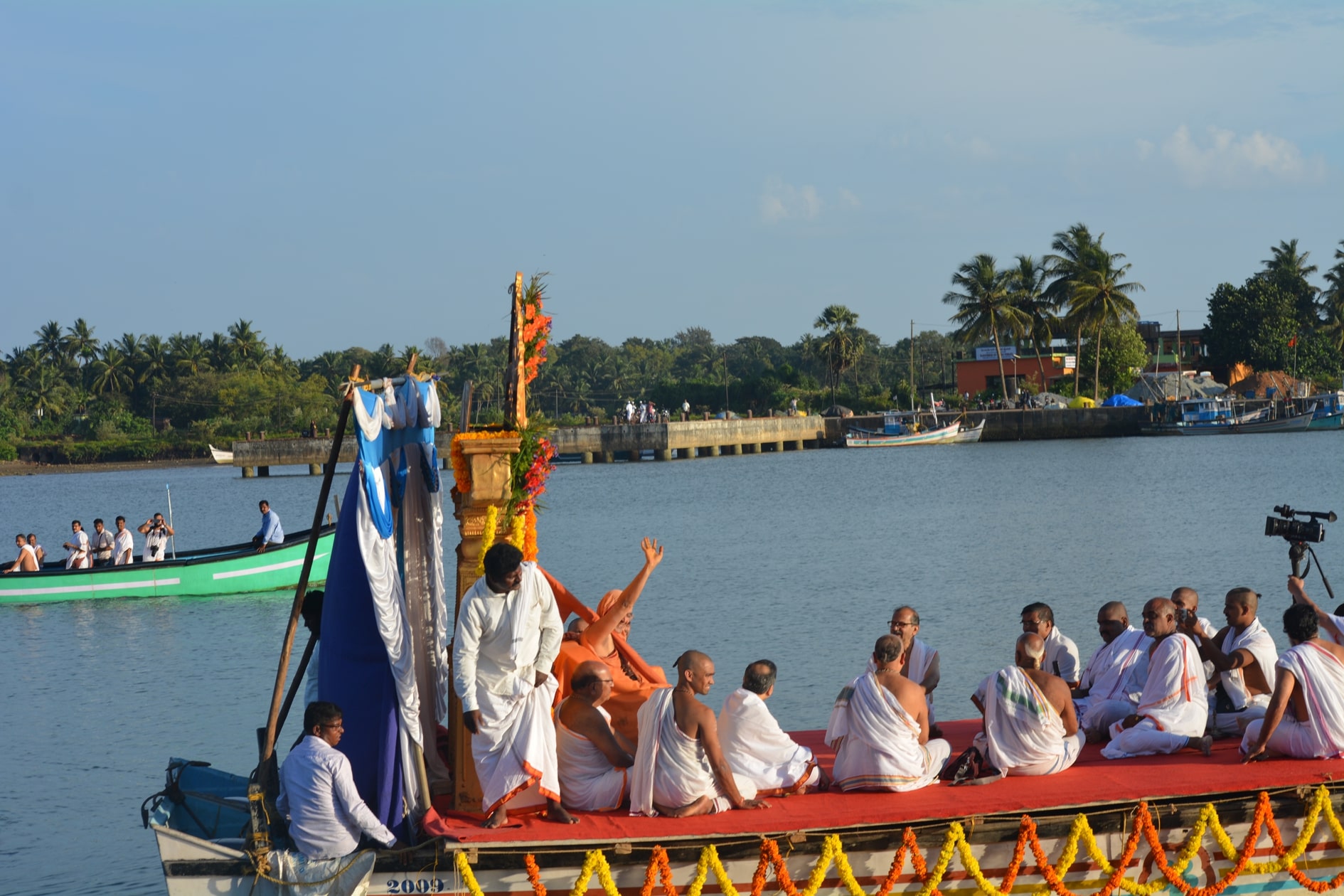 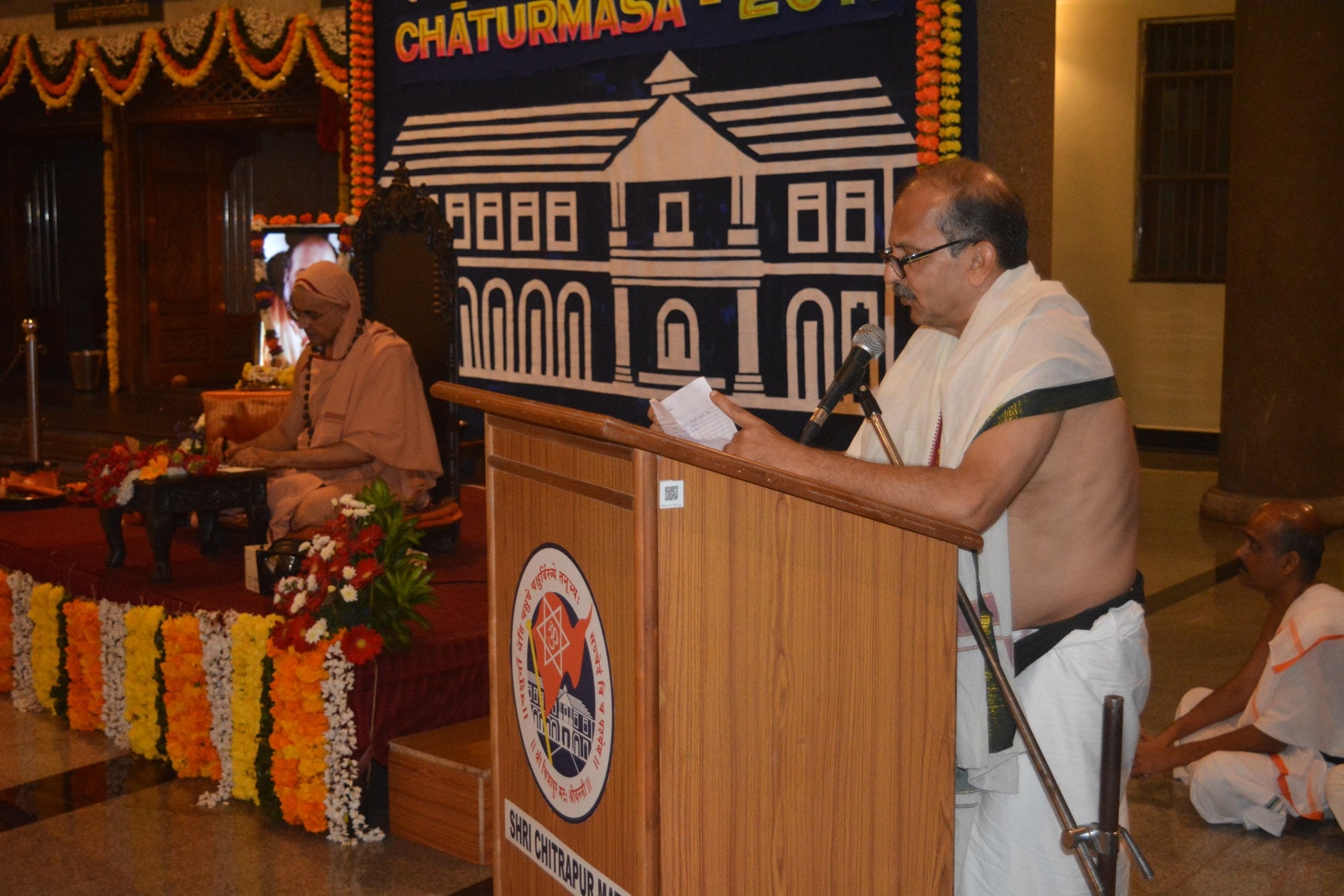 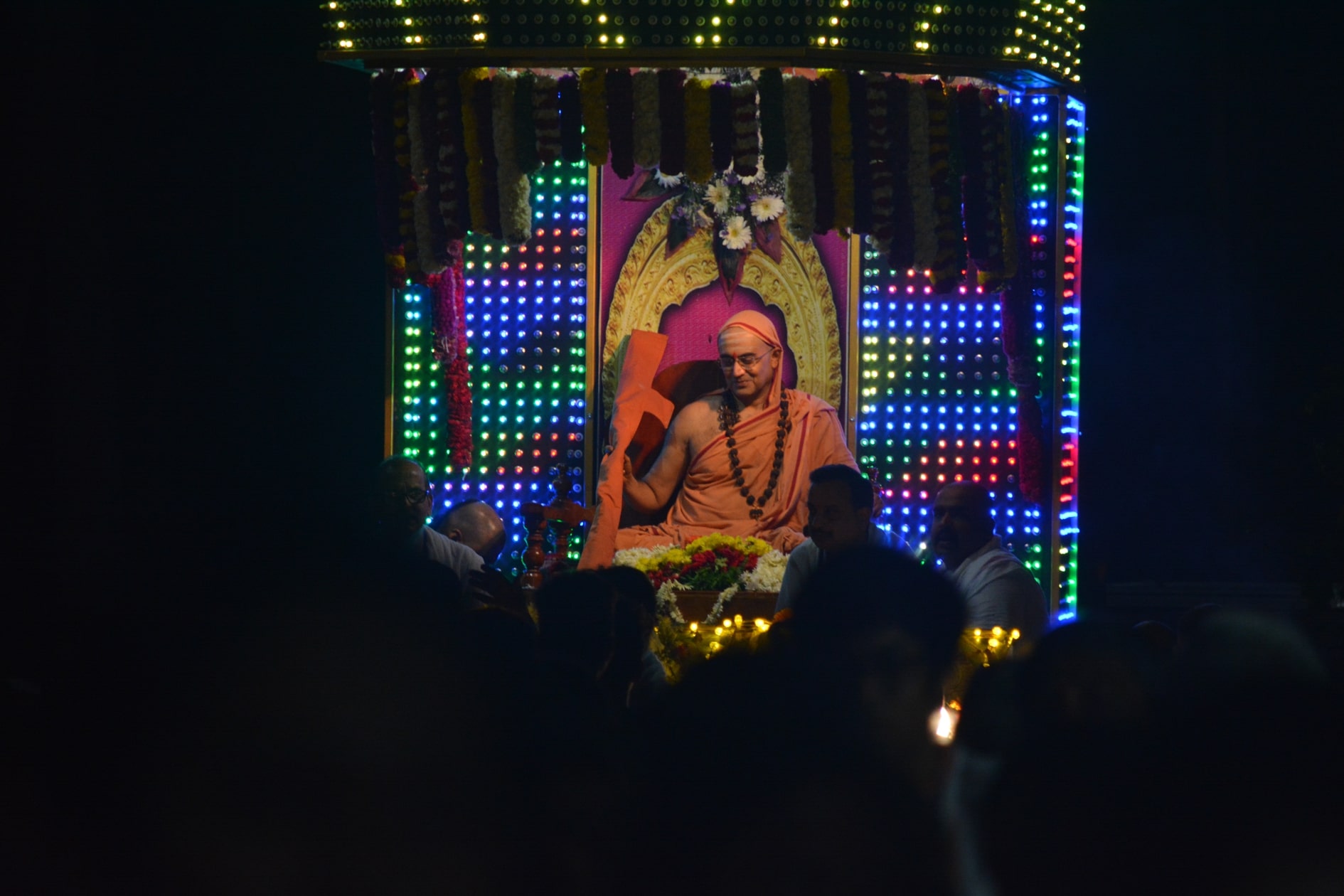 Let me step back a bit in the corridor of time. In August 2011, by the sheer handiwork of fate and destiny, our endeavour to live amidst nature brought us to Chitrapur, to a farm land truly blessed by nature’s bounty. In the years that followed, our connection with the Math, though insignificant, grew. I guess the lessons the land teaches us as we tend to it and the Aashirvachan-s of our beloved Swamiji were having their effect upon our subconscious mind, until this day when I was planted right in the midst of it all - Chaturmas 2018!

My work began with getting to know the people at the Math and what they do. For over two months, I was a silent observer, watching, learning and planning. It may have appeared that I was doing nothing at all, but I was definitely getting to know a lot. ‘We don’t see meetings happen’ was an oft- repeated comment along with ‘Don’t worry, Lord Bhavanishankar gets it all done.You don’t need to do anything’.

In one of our meetings with Parama Pujya Swamiji,  Swamiji said “Everything is all set in Shirali, the kitchen, accommodation, is all functional, so nothing special needs to be done” and just as I heaved a sigh of relief, He added with a twinkle in His eye “But we do need a Convener to blame if something goes wrong!”.

Our work actually began in the first week of May when we formed the Chaturmas 2018 Committee. The study in the preceding weeks had brought out all that we needed to set right and prepare for the people who throng to the Math during Chaturmas. We did the very things done ahead of Chaturmas in Shirali, but a bit differently. We set ourselves stiff targets, the stiffest of all being, that we make people smile and laugh and enjoy the work they do! We tried to put into practice all the management principles and techniques, drew timelines and mapped processes and so on. Though we were not 100% successful in ironing out the stiffness, the work started to get done and soon the atmosphere was charged with activity and enthusiasm. The excitement was palpable.

The renovation of the Math began with the installation of fans and lights and fixing the audio system. The local volunteers participated with enthusiasm in the cleanliness drive. The guest houses were readied and the accommodation - allotment processes streamlined. Volunteers, both local and from outstations poured in and took it upon themselves to ensure that the tasks were completed much before Guru Purnima, which marks the onset of Chaturmas. Occasionally, we had to pull all-nighters to get the jobs done on time. Soon the results started to show. Positive changes were noticed – one no longer needed to shout into the microphone.  The sound system had been spruced up and one could detect even the slightest hum coming out of the speakers. Was the weather cooler this year? The soft lighting made people relax and focus better on their Devi or on the Gayatri  Anushtan. The overall atmosphere started showing a marked difference.

Pujya Swamiji’s Chaturmas Vrat began. Our goal was to keep Swamiji comfortable and not let our work be a bother, or cause concern, or hinder the strict routine of special anushthaan-s our Swamiji observes for the benefit of our entire samaj. Our interaction for this purpose actually turned out to be minimal. We occasionally posed these questions to Swamiji - Is everything okay Swamiji? Are we on the right track? Do we need any course correction? The answer would be “Sagalen Sama Zaatasa” , “Gomtenkornu karaati”.  This and the radiant smile that followed filled our hearts with joy and bliss.

The days were filled with activities - Anushtaans, Shri Guruparampara Charitra Paaraayan and cultural programs.  The evenings resonated with the sound of the conch heralding Swamiji’s arrival for Deep Namaskar, followed by the Pujan-s done every evening by Pujya Swamiji and then the Ashtavadhaan Seva.  The Devi Pujan and  Shiv Pujan at night had maximum participation from the Yuvas of Shirali.  Right from singing the song for Purvaanga and the Rajarajeshwari Ashtak to reciting the Puja- Shloka- s on the days when Swamiji observed Ekant, they participated with total involvement. Adding to this enthusiasm greatly was the bunch of little children who led the Jai-jai-kar-s every evening with joyful gusto. Each and every seva done with devotion accelerated spiritual fervour and enhanced the festive atmosphere.

The days went by at an astounding speed and before we realised it, the end of the Chaturmas Vrat drew near. The final day posed a challenge.  Our goal was that both the auspicious events  - Seemollanghan and then, the Shobha Yatra  should be conducted efficiently, without causing Pujya Swamiji the sllightest anxiety. Would it be possible to maintain a tight schedule and complete all the festivities within a reasonable time? We split up the activities for this entire program into several small and easily manageable tasks. Each of our committee members and their volunteer groups executed these tasks flawlessly. The main cause of concern was the Shobha Yatra. From past experience it was taken for granted that it would be well past midnight before the procession reverts to the Math.

I was overwhelmed with guilt, for I had never participated in a Shobha Yatra before. In retrospect, I can well imagine today, the discomfort Swamiji has to put up with, if the Yatra goes on for a very long time. I had resolved that we should try and complete the Shobha Yatra in  a maximum of two to three hours. “That is just not possible” was the only thing I heard in response. Till the man for the job appeared. He involved all the local ‘strong men’, the rickshaw and taxi operators, those “ever willing -to- help” people who we find hanging around, everyone. We did  some micro-planning, examined the traffic situation, the likely causes for delay, such as cross- movement of people, number of stoppages, time taken by  each devotee to do the aarti and phalasamarpana and so on. We then devised methods to reduce the time for each activity.  When the procession began, seeing the sea of humanity that lay before us, we wondered if any of our plans , made sitting in the confines of our comfortable office, would ever work. However, Robin Hood and his merry men swung into action and made the impossible just happen! Swamiji could alight from the Ratha at 10:10 pm – in exactly two hours after ascending, thereby bringing the Shobha Yatra to a grand conclusion.

Was there a takeaway for me from this Convenorship? Yes! Plenty! It was a total  positive- learning experience, which is evident if you read between the lines of all those paragraphs that have gone before this one. Meeting different people from our samaj, working with some of them, learning tolerance and (of course) being tolerated.... yes I have really learnt a lot from this enriching experience. As a result, my connection with the Math and Parama Pujya Swamiji has only strengthened. Ultimately, what ferried us through this journey so smoothly was, without doubt, the Infinite Grace of our Beloved Guru and our hallowed Guruparampara!