On Saturday, 17th February, participants arrived late in the evening at Shri Durga Parameshwari Mandir, Karla. Shri Krishnanand Heblekar, or “Kutty maam” as we lovingly call him, briefed us about the distance, do's and don’ts, precautions, and also acquainted us with the Yuvathon route.

Sunday, 18th February, our day began as early as 4:15am. Everyone reported in the bhojanshala at 5:15am with most of us wearing our Yuvadhara T-Shirts. After a sumptuous breakfast, we gathered in the Math sanctorum for Suprabhatam, and to seek blessings for the Yuvathon at the Sanjeevani samadhi of Parama Pujya Shrimat Parijnanashrama Swamiji III. We collected our food packs, which had been thoughtfully put together by our Sanchalaks, to keep us hydrated and energised throughout the walk. We sang the Shri Chitrapur Math Trishati Samuha Geet and commenced Yuvathon 2018 at 6:45 am under Kutty maam’s able guidance and Nikhil Chandawarkar’s leadership.

Recce team volunteers were placed at proper intervals among the yuvas throughout the walk. We also had Dr. Varun Wagle as our in-house doctor, and designated individuals responsible for the first aid kits. At day break we walked towards Ekvira base. On reaching the base, we started climbing the flight of stone steps leading to the temple. It took us about 30 mins to reach a diversion, where a left led to the hill and a right to the Ekvira Cave. We took the left and started to ascend the hilly terrain and this was where our actual trek began. Being unaccustomed to the slightly rugged climb, we were breathing heavily, and it was difficult for us to secure our grip. Among us were stronger yuvas who placed themselves at points from where they could help the rest overcome the obstacles, assuming responsibility according to the demand of the situation. At times lending a helping hand and at times just a slight nudge was all one needed. As we started getting closer to the top, the height offered a view of a mist shrouded valley beautifully lit by the rising sun’s rays. After this trek of another 40 mins, we reached the top by 9:00am. We took a break of about 30 mins to relish our sandwiches and Enerzals and click a few snaps. By this time, the sun’s rays had lost their tenderness and we got our caps and glares out for a more comfortable walk ahead. Brimming with energy, we started our walk further, which now consisted of a path parallel to the ridge. After a short walk, we reached a spot called as the “Hyena Point” by the recce team as they had spotted a big dog-like animal from afar, during the recce, uncertain if it was a hyena. This spot had channel like openings dug by the forest department for water conservation. We also had an overlooking view of the Valvan dam to our left, Shirota lake to our right and plantations laid by Tatas on the slope. Lake Shirota is at a higher elevation than Valvan Lake and a channel is dug which passes through the hill from Shirota to Valvan. After a 45 min walk on straight rocky terrain and a small break in between, we saw a dirt road going downhill and up again. This was a tough patch as the red soil on the road was loose. On reaching up there we could see electric poles running parallel to the ridge. We followed the electric poles for a while and after sometime, went off that path to get a view of Valvan Lake and dam. We could also see a water channel entering lake Valvan through the hill which Kutty maam had described earlier, that came from Shirota to Valvan. This was the background for our photo session after which we resumed the path near the electric poles. After a 15 min walk and slight descent, we could see the landscape we all proudly flaunted on our Yuvathon 2018 badge. This scenic visage served as the backdrop for yet another group photo.

Now came the last leg of our Yuvathon, where we climbed down a hill and crossed another, descending through plants and cacti before we could complete the trek. This was a steep descent because the path majorly consisted of hard basalt rock with few places to secure a strong grip. We helped each other descend and reached the foothill to the village of Karandaoli, where we came upon a small pond. A few of us chose to dip our feet in the cool water. Then we walked for about two kilometres and reached the bus awaiting our arrival to take us back to Karla math.

Once back at Karla math, we assembled in the temple by 1:30-1:45pm to thank the Goddess Shri Durga Parameshwari and our Parama Guru Parama Pujya Shrimat Parijnanashrama Swamiji III for a successful Yuvathon.

The best was yet to come, for we were blessed with an interaction with Parama Pujya Shrimat Sadyojat Shankarashrama Swamiji! We quickly had lunch and readied ourselves for the interaction to take place at 3:30pm.

Parama Pujya Swamiji stressed on the need for us Yuvas to learn some basic skills and bag opportunities to be one with nature, for this was when we develop best. After an informal interaction, and the icing on the cake i.e. the cherished Kitkats from Parama Pujya Swamiji, it was time for us to head back to our respective sabhas.

The best part of the trek were the two dogs who accompanied us throughout the trek, joining us in our small picnic like breaks and in the end escorted us to the bus that awaited us near the Kal Bhairav Temple.

Yuvathon 2018 concluded with us having made new friends for life and memories to last a lifetime.

We would like to extend our sincere gratitude to our beloved Parama Pujya Swamiji and Chitrapur Yuvadhara Office for giving us this opportunity, our Sanchalaks - Smt. Priti Panemanglore and Smt. Sabita Harite, the recce team consisting of Yuvadhara chief coordinator - Aditya Chandavarkar, Shri Krishnanad Heblekar, Shri Dilip Basrur, our trek leader- Nikhil Chandawarkar, our photographer- Dhrutiman Padubidri and Mohit Karkal for thoughtfully devising the trek route and finally all my co-yuvas for participating and making Yuvathon 2018 a fruitful and successful event. 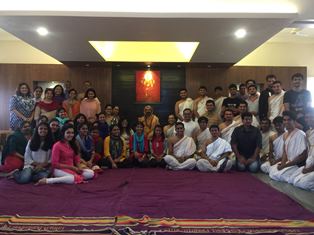 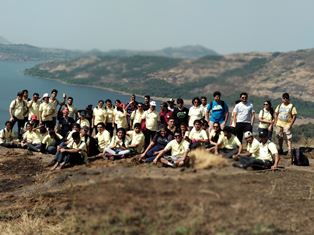