Shobhana Bijoor from Parijnanashram Vidyalaya, Karla reports on how some of the NRI shivirarthi-s stayed back after the camp to offer some novel seva at the school, giving the bright children some exciting     (December 2017)

In March 2017, I met Priyanka Gulwadipachi. She told me that an NRI Shivir was being organized in August 2017 during Pujya Swamiji’s Chaturmas camp at Karla and that some of the participants were eager to visit our Parijnanashram Vidyalaya to offer some seva. I gave my consent gladly, but was a bit apprehensive too as I could not comprehend what kind of activity they could contribute. She said that she would take Parama Pujya Swamiji’s Anumati.

I realized how serious they were about this when I received e-mails from US-based Mangesh Hoskotemam who introduced me to Neena Karnadpachi. Neena pachi was eager to help and asked what kind of contribution they could make. I told her that they can do the activities based on the curriculum of Standard 1. The school had not yet reopened after the summer vacation and we were still busy with admissions. We were also recruiting teachers as this year we had inaugurated our Primary Section. Neither was our time table ready, nor had we planned our curriculum. But I told Neenapachi that we had planned to use the C.B.S.E. syllabus. She immediately downloaded all the books and started planning their project. I was quite impressed to see her minute planning of each activity.

Their NRI group consisted of Hrishikesh (the 11-year-old son of the Karnads), Anoushka (their daughter who was 17), Rishi Hattangadi (also 17), Neena pachi and Anmol mam Karnad and Smita Kulkarnipachi. They conducted activities from 8th to 11th August. They divided themselves in two groups for the two divisions of Std.1. Anoushka had written a small interesting song about washing hands, which they taught the children. Since they would sing it after every period, the children picked it up in no time. Within those four days all of them became so involved with the children that they knew each and every child by his/her first name. Our children too participated whole-heartedly and looked forward eagerly to see what new activity will be introduced each day!

The group would come to school early and participate with all of us in the morning prayers. We have a child in Std. 5 who is dyslexic. We used to call him half an hour before the school so that we can give him some individual attention. Hrishikesh started taking this child’s reading lesson on his own, patiently explaining how to pronounce some of the difficult words.

During their free time the group members would all help in sorting out the library books, sitting quietly in one corner of a room. Saturday, the 12th was a holiday for the school children. But they all came to school to complete the library work and actually worked for the entire day.

We were all so overwhelmed by their dedication, that we gave each of them a certificate of appreciation. We were especially touched by the sincerity and concern shown by the three youngsters- Hrishikesh, Anoushka and Rishi. At their age most of the children are busy chatting or playing video games on their mobiles, or partying with their peers. Quite contrary to this, these children seemed totally happy teaching our simple village children.

Even after going back to the U.S. Hrishikesh organized a book drive and collected 190 story books and general knowledge books. Last month he sent them to our school with his father.

We really thank Priyankapachi, Mangeshmam and each one of the NRI group who came to Parijnanashram Vidyalaya for giving us a chance to know them. I am sure Pujya Swamiji’s Blessings will always be with them. 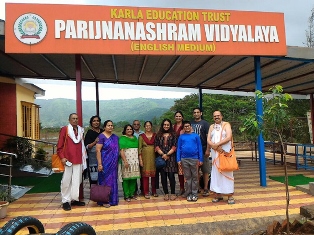 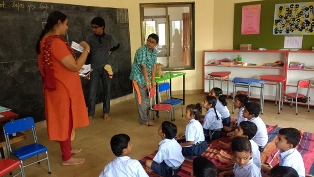 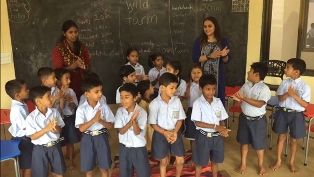 Love is ......extending a helping hand

Without the Blessings of our Guru, life is a large eddy full of sharks!

Elocution and articulation have never been my forte. However, the Guru’s Blessings can make a lame man walk and a dumb man talk! With this faith I have attempted to write a few lines about my experience at the NRI Shivir and later, at the Seva-Saptaha.

My husband and I attended the NRI Shivir from August 2nd to 6th and continued to stay at the Math for a week to participate in the Seva-Saptaha. We were accompanied by our two kids, Anoushka-17, and Hrishikesh-10. To say ‘we did it’ would be very arrogant and ignorant. It is really our Gods and Guru who got it done for us and we were merely enjoying the blissful ride! Having never visited any Math before, we were initially worried about how we would be able to follow the rules and rituals of such a hallowed place. But the moment we reached the Math we got a warm and fuzzy feeling that we were coming home and that everything was going to be okay. Little did we know then that everything that we experienced was more than just okay! When we heard Swamiji speak to us, all our fears vanished, all doubts were cleared, we felt a strong sense of belonging, and we were at peace! We were pampered by the Sanchalika-s and Sanchalak-s who were like parents taking care of their children! The four days of the Shivir passed so quickly....Attending Suprabhatam, Jalabhishek; doing Paduka Puja, Devi Anushthan, Vimarsh; and learning Sanskrit, Ninad, and of course, the fun rebounder exercises.

In our hearts we knew that the wonderful time at the Shivir would come to an end very soon and we would have to bid farewell to everyone. As we transitioned from being
Shivirarthi-s to Sevak-s of the Seva-Saptaha, we looked forward to taking care of the devotees who come to the Math.

Our Seva-Saptaha preparation had started months in advance. Our children wanted to experience spiritual seva at our Math and also participate in the activities at the Parijnanashram Vidyalaya supported by the Karla Education Trust. As parents, we wanted our kids to understand how children in India excel regardless of their socio-economic situation. As an overprotective mother, I was happy that my kids would get this opportunity in the safe environment of our Math, surrounded by a loving, caring ‘extended family’. Mangeshmaam Hoskote had taken permission for all of us to spend time each day at the Parijnanashram Vidyalaya. Our daughter Anoushka started a crowd sourcing campaign in USA to collect funds for the school. Geetapacchi Heble and I devised several Mathematics and English activity plans. The idea was to teach first graders basic Mathematics and English concepts in a fun way so that they learn while playing games and doing activities. Anoushka came up with a ‘Hand-Washing’ song that we would teach the kids to reinforce the importance of hygiene and washing hands. Our daily seva at the school would not have been possible without the gracious permission of and guidance from Shobhanpacchi Bijoor and help from Lalitapacchi Amladi.

At the Math, we would attend Suprabhatam at 6am on each day. The morning Ninaad exercises conducted by Mirapacchi invigorated us for the entire day. With loving guidance from our team leader Anjalipacchi Gokarn and the sevak-s from the Virar Sabha, we quickly learned our duties at the Math. In the dining hall, we would not only serve food to the devotees, but also make sure that all the utensils were wiped clean. At times, I would help roll out paratha-s or makeundiyo-s in the kitchen. We learned to offer Naivaidyam to Parama Pujya Parijnanashram Swamiji. We were amazed to see our children, including our 10- year -old Hrishikesh, being so enthusiastic about their duties at the Math.

We were in the school daily from 10am to 4pm conducting activities. We also helped Muktapachi Dhareshwar catalogue the school library. We were accompanied by two other NRIs – 17-year-old Rishi Hattiangadi and Smitapacchi Kulkarni.

We got such a loving reception not only from the school staff but also from the little students. We were very surprised to see our 10-year-old son Hrishikesh helping another boy (not too much younger than himself) with pronunciations of English words. The beauty of them relating to each other ‘boy-to-boy’ was truly magical. Even more magical was when on our last day, all the kids of the class sang the ‘Hand Washing’ song for us! Just in a course of few days they had memorized this English song!

What we set out thinking that we would ‘teach’, really became one of the most valuable lessons we ‘learnt’! Such life experiences cannot be bought. We often get buried in the mundane activities of life, with little or no chance to contemplate on the things we have and be grateful about them. Seva Saptaha gave all of us a chance (in spite of our extremely busy schedules) to realize how fortunate we are. The children at the school, in a way, taught us this valuable lesson. They had an abundance of happiness in spite of their limited resources. They were so intelligent and full of bright ideas! Sometimes they could not articulate their thoughts very well in English, but that did not diminish the brilliance of their wonderful minds. We are very grateful that we got a chance to offer this seva and that our kids got this wonderful opportunity at such a young age. This is an excellent way to immerse our kids in our culture under the watchful motherly eye of our Parama Pujya Swamiji! We are thankful that this life-changing experience has been a catalyst in strengthening our bond with our Math.