The Andheri Yuvadhara continued its Sankalpa for performing Gurupujan once every month. The nirmalya from the Gurupujan was composted and we continued with our 'Green Gurupujan ' initiative.

During the Janmotsava celebrations held at Karla Math on 14th-15th June, 4 of our yuvas (Abhay Talmaki, Kartik Kaikini, Anvay Kundapur and Chirag Trasi) participated as volunteers and enthusiastically offered sevas wherever required.

Seven Bengaluru Yuvadhara members, reached Shirali to take stock of the fixed assets at our Shri Chitrapur Math, Shirali. A Bengaluru Yuvati, already at Shirali, assisted in whatever way she could.

The Yuvas and Yuvatis got a rare opportunity to pull the Teru on 1st April, from within the premises of the Swami Parijnan Vastu Sangrahalay, onto the field where the Teru was to be decorated for the upcoming Rathotsav. This was in the august presence of Param Pujya Swamiji.

At 5:00 am on 2nd April 2017 Nalinipacchi Manjeshwar taught the Yuva and Yuvatis how to use the rebounder. After the exercise, she conducted Praanayam and Ninaad sessions.

A few Yuva and Yuvatis gathered at Shri Chitrapur Math, Bengaluru to discuss and plan a Yuvadhara activity during Param Pujya Swamiji’s upcoming visit to Bengaluru on the occasion of Shankar Jayanti. It was decided to approach Indu pacchi Gersappa to write a script for a short skit based on the teachings of Param Pujya Swamiji.

The second batch of Yuvas and Yuvatis reached Shirali to affix the asset lables with QR code on the assets which were identified by the first batch, earlier in the month.

After the programme the participants were blessed by Parama Pujya Swamiji.

Based on Parama Pujya Swamiji’s guidance and instruction a two day Vimarsh session was organised on the 20th & 21st May 2017, at Shri Chitrapur Math, Bengaluru. The Vimarsh was conducted by Tejashree Bailur.

As per Swamiji's instruction, the participants listened to the recording of the Swadhyaya on the Guru Paduka stotra. Tejashree got the members present to share their understanding and clarified points that were not clear.

The programme planned on 18th June 2017 was to commemorate the Janma Divas of Parama Pujya Parijnanashram Swamiji III, instead of 15th June 2017, a working day

Three Yuvatis participated and successfully completed the Devi Anushthan and the Shrama Seva of cleaning the plastic chairs at Sri Chitrapur Math, Bengaluru, was attended by the three participating Yuvatis accompanied with one Yuva.

A Vimarsha session was organised by Borivali Yuvadhara at CSA room, Vamanashram on 27th May 2017 at 5 pm. It was conducted by Smt.Shilpa Mudur Pacchi which was attended by Arya Dhareshwar, Ananya Dhareshwar, Akash Aldangdy, Ritwik Murdeshwar, Omkar Yederi, Srikala Nalkoor and Deepa Katre Pacchi (Cordinator). The session was an inspiring delight and an eye opener towards adhyatmic life.

The following shloka was taken for the session,

The session started with Sabha praramba prarthana. The shloka was introduced, first with its pronunciation and later the meaning of each word was explained. “Shree” could be our material possessions or our strengths or something that we seek. It could be seen as a goal or a desire, idea or thought to do good. It starts with positive intentions, a sankalpa, and moves forward with positive deeds going towards that goal. Beginning with examples from our daily lives, Shilpa pacchi moved to the spirit within us. We were thus enlightened towards the adhyatmic sense. Desire, determination and dedication would lead us to the realization of our goals.

Following is the summary of the session:

Later on the session was concluded with sabha samapti prarthana after yuvas summarized the points discussed the summary of the session.

On 1st of April Yuvadhara Vimarsh was conducted by Dr. Chiaitanya Gulvady at Shri Arun Chandavarkar’s residence. 7 yuvas (Mitali Puthli, Divya Vinekar, Sanika Balwally, Medhaa Karkal, Mohit Karkal, Aditya Chandavarkar and Nikhil Kadle) had an insightful session on how prosperity can be achieved by taking a Sankalpa and further how the prosperity can be sustained with the exercise of discipline and practice. On 25 th April, Samaradhana of H.H. Parijnanashram Swamiji was observed in the Matunga Mitra Mandal hall and 3 yuvas (Aditya Chandavarkar, Sanika Balwally and Janhavi Honnavar) took the opportunity to perform Shri Gurupujan. 3 yuvas(Mitali Puthli, Aditya Chandavarkar and Ankita Chandavarkar) visited Shirali to be a part of the Rathotsav when our Aradhyadevata Bhavani Shankar is worshiped in the magnificently crafted Ratha.

The month of May started off with a practice session on recitation of Shrimat Bhagwat Geeta conducted by Yuvati Mitali Puthli at her residence. Yuvati Divya

Pawar had a fruitful week at the Karaseva Shibir, Shirali where she offered seva by being a part of the daily Viniyogas and routine activities conducted in the holy precincts of our Shri Chitrapur Math in Shirali.

The month of June brought with it the seventieth Janma-Divas of H.H. Parijnanashram Swamiji III celebrated as Janmotsav in the sanctum sanctorum of Shri Durga Parameshwari Math and Sanjeevani Samadhi of Parijnanashram Swamij III. Yuvati Sanika Balwally offered bhajan seva for the Yuvadhara bhajan seva prahar on 14 th June and 5 other yuvas (Aditya Chandavarkar,Mitali Puthli, Divya Pawar, Divya Vinekar and Chinmayee Pawar) were also a part of the Janmotsav celebrations.

The AGM of the Sabha was held together with Yugadi celebrations on the 16th April 2017 , at Shri Kavle Math. . The function was also attended by 10 yuvas ---Akshay and Pallavi Rao, Shambhavi Padukone Rana, Chaitanya Betrebet, Ishani Rajpal, Ashutosh Gokarn, Ananya and Abhiraj Majumdar, Divya Kumta and Suparna and Tamal Nath, who , enlivened the occasion with their presence and helped in the conduct of the function, serving Prasad bhojan, and later in winding and cleaning up of the Math.

Yuvatis Aparajita Balsavar and Tanvi Betrebet were felicitated by the Sabha , in absentia, for having completed schooling and graduation respectively.

A meeting of the Yuvadhara was also held to elect representatives and the following yuvas volunteered and were elected unanimously, as representatives for the year 2017-18.

Delhi Yuvadhara congratulates them for volunteering and assuming the responsibility and wishes them all the best. At the meeting it was decided that the yuvas would soon meet at Divya Kumta’s place over lunch to chalk out activities for the year.

A photo of the yuvas at the meeting is attached

To enable the yuvadhara members to bond informally with each other and to brainstorm ideas for the year’s activities, a meeting, over lunch, was held at Yuvati Divya Kumta’s place, on the 22nd April 2017. This was the first time that the yuvas were meeting at a members place and the yuvas were quite excited at the idea . Yuvas Prathamesh and Divya Kumta who hosted the potluck lunch despite a very busy life, deserve appreciation. It was fun time and the yuvas had a good time getting to know each other better.

The program was essentially a Yuva and Prarthana varga driven one and the program line up which saw Yuva participation was as follows.

The Samaradhana of Shrimad Pandurangashram Swamiji was celeberated at the residence of Yuvas Pratemesh and Divya Kumta at Gurgaon. This was the first time the yuvas were hosting a Math function at their residence and all credit to them for first offering to hold the function and then despite their inexperience, celeberating it in a grand way. . On this auspicious day the couple also celebrated their 5th wedding anniversary. Elabarate arrangements were made for the pooja which commenced around 11:30am with the usual Math prayers, followed by soulful Bhajans, and Shlokas,and Mangalaarati, followed by a sumptuous Prasad Bhojan.The Yuvas at a very short notice presented a slide show on the life of P.P Shrimad. Pandurangashram Swamiji, based on the book” Pandurang, Pandurang”

Contributors to the presentation were

This was followed by a quiz on the Math and it’s activities conducted by Sandhya Nayel pachi in which the yuvas too participated.

Monday the 15th of June 2017, saw the enthusiastic participation of 10 families in the Janma Divas celebration of HH Parijnanashram Swami III, which was held at the residence of Udyavar Arvind and Lakshmi Rao .The yuva members present on the occasion included yuvati Vidya Rao Nippani and Yuvati Ishani Rajpal..
The Sabha commenced with opening prayers followed by Parijnana Trayodashi and Kalabhi Kalpita. The group of sadhaks including the yuvatis then recited the Lalita Sahasranama with gusto.! Bhajans were then sung by the whole group with Yuvati Vidya Rao leading the Bhajan Lago Tujhe.
Mangalarati was followed by Deep Namaskar, after which the Sabha event ended with Closing Prayers. Later, a sumptuous Prasad Bhojan was served to the sadhaks.

Yuvati Jayati Nayel who could not be present had especially baked a Mango Cheese cake for the occasion, with great Shraddha and had sent it over. After the Aarti the cake was cut by the senior most member present and was greatly relished by one and all. 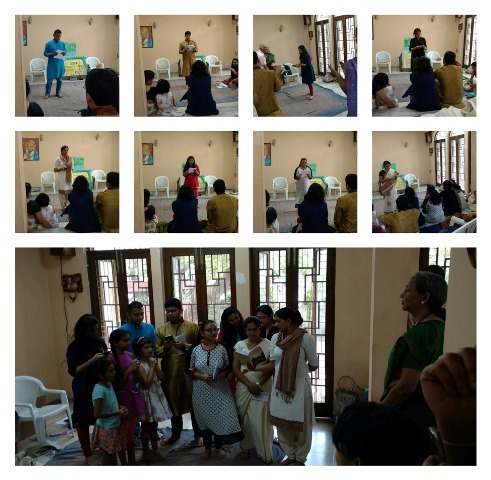 Yuvas presenting their papers and leading with Parijyanashrama Tryodasi during Shankara jayanti celebrations on 30th April ,2017. 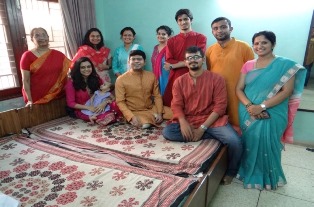 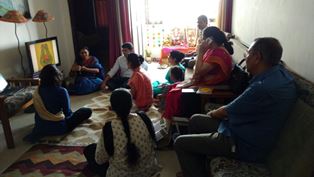 Yuva Presentation on P.P.Pandurangashram Swamiji on 27th May 2017 at Yuvati Divya Kumta’s place.

Yuvas took part in Bhajan seva, during the the Grant Road Sabha Prahar and also took part in the Palkhi Utsav.

Sanat and Kartikeya helped in carrying the Palki and them, along with the others escorted Param Pujya Swamiji, in turns, for every prahar and for aashirvachan.

Many yuvas were a part of bhajan seva with our new member Siya Ragade playing the flute. They also helped filling packets with almonds grapes cashews as the prasadam for the paduka pujan.

The yuvas also helped in gathering the fruits and flowers in the phaleru.

All the yuvas also volunteered for the bhojan seva by serving all the guests and helped in cleaning up later on.

On behalf of Pune sabha I would like to thank the CYO for this opportunity and all the people are Karla math for their immense support. I would also like to thank our sanchalaks for their constant guidance and love throughout. 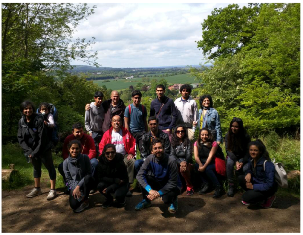 Annual Satsang - 17 June 2017. This is the annual Satsang where Math prayers and bhajans are conducted by the Saraswat Samaj UK. The youth were involved in the organisation of this event. Four youth took part in singing bhajans at the Satsang - Anjaneya Shiroor, Anushree Amembal, Chirag Amembal and Abhinav Ullal. The youth participation in the bhajan seva was very much appreciated. 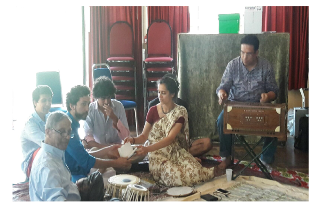 3. Summer colours Holi plus hula hoop event which was conducted in 02 July rather than March because of the weather and school/college term times. We combined this with a physical activity session on training with hula hoops in a dance format to music. One of our Saraswat Samaj members Rohini Rathour nee Karpe is a trained hula hoop trainer and she conducted a class for the youth and others present for the session. The summer colours events with traditional Indian festival food was much enjoyed by the youth, children and adults alike. The youth who participated in this activity were Anushree Amembal, Chirag Amembal, Advait Amembal, Tanya Haldipur, Trisha Kandlur, Tanya Kandlur, Kiran Kowshik, Frezy Kowshik and their son Ayaan Kowshik, Prajna Mavinkurve, Abhishek Mavinkurve, Keya Sajip, Ritwik and Sherene Samsi and their daughter Sanaya, Neha and Aditi Shirsalkar, Anoushka Sthalekar, Rushal Sthalekar, Abhinav Heble, Shivani Kundapur Pereira and Nigel Pereira and their son Aarin Pereira, Poulomi Nilawar and her daughter Gia Bhala. 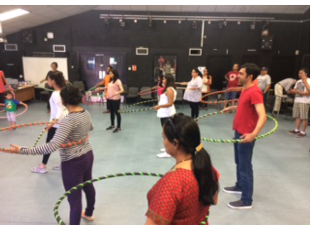 The hula hoop session was very well received by the youth. We are hoping to engage youth in similar such physical fitness activities.