Saints and spiritual leaders have their own way of communicating and facilitating events. I saw this from personal experience in the recent past, when a series of interconnecting events led me to what the title of this article says.
A series of fortuitous events led to a vintage formal portrait of H.H. Pāṇḍuraṅgāshram Swāmījī coming to my attention from a distant land, doubtless by His Grace! Let me explain. I have, for quite some time now, been in touch with an academic focusing on South Asian History and Civilizations at a European University (Lausanne, Switzerland), Dr.Philippe Bornet, (courtesy Dr. Frank Conlon’s good offices). Dr. Bornet was working on the Malabār area, and we had, as students of history, exchanged notes on maritime trade, inland economic and social developments in peninsular India 18th /19th century, and allied subjects.  All these discussions were online, naturally, as this was a time of global lockdowns. With prolonged contact, we became good friends. Somewhere along the line, I recall him asking me if I was a TamiῙ (maybe from the name now made famous in quite another context). In response, I had explained to him my Chitrāpur Sāraswat origins, mentioning that the successive line of our spiritual leaders was centered at Shirālī in North Karnāṭaka. I had also described him the history of community migrations/movements from North India to the coastal South West.

In course of his researches, Dr Bornet had come across a German missionary tract that detailed out religious practices and had accompanying photo-engravings covering different religious practices/religious leaders across the world. This tract, circa 1883, was titled “Bilden Tafeln zur Landen-und Volken-Kunde” (lit) “Image Panels on Geography and Ethnology” with a number of photo engravings of religious figures and practices, with brief commentaries on each. [I will allude to the commentary later in the article] The Church perhaps created this book for their own knowledge and internal education. In this tract, Dr.Bornet had come across a portrait of a religious leader captioned “Der Swami von Schirale (Kanara)”.He asked me if “Schirale” was same as our Shirālī. 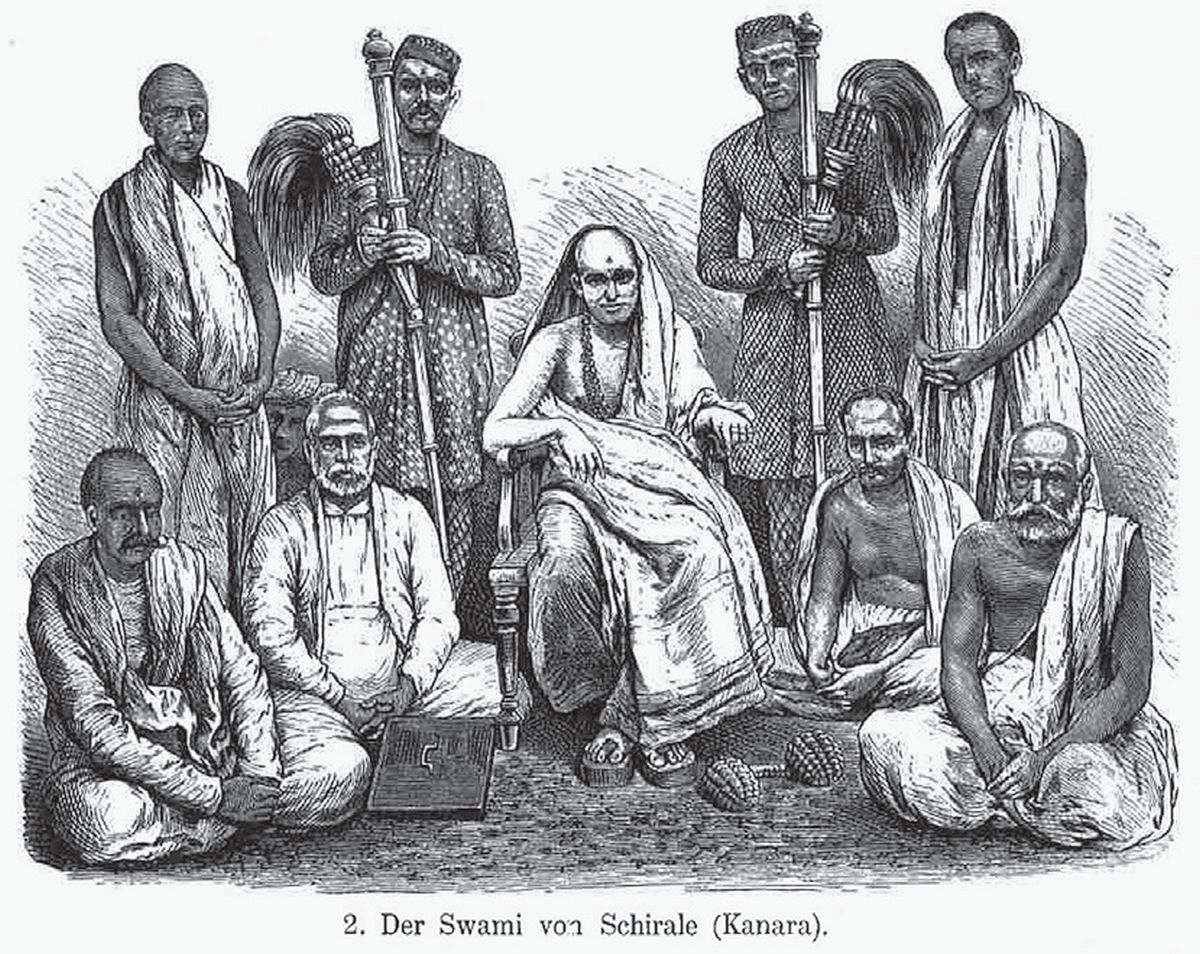 One look at the portrait, and I knew, to my delight, that it was our Pāṇḍuraṅgāshram Swāmījī!! When I confirmed it was, he spontaneously asked me if I wanted a print of the picture. He said he could get any size printed as they had the equipment. I chose paper of A2 size as appropriate for Swāmījī`s portrait, and in due course this photo, beautifully printed and packed, winged its way to Ḍelhī from Lausanne.

I had this portrait framed professionally by a photo framer who works for art exhibitions and was wondering how to send it across to H.H. Sadyojāt Shaṅkarāshram Swāmījī and the Saṅgrahālaya at Shirālī, when behold! H.H. Swāmījī`s visit to Ḍelhī enroute Haridwār was announced, and it all seamlessly fell into place. The portrait was handed over personally by me to H.H. Sadyojāt Shaṅkarāshram Swāmījī, (as it happened on June 1, 2022 - the day of H.H. Pāṇḍuraṅgāshram Swāmījī`s Samārādhanā and He was very pleased to receive it. The portrait left with Him and the entourage when they proceeded to Mumbaī enroute Shirālī  on 9th June 2022. I understand that this portrait has since been installed in Gallery D at the Shrīmat Parijñānāshram Vastu Saṅgrahālaya. A true Homecoming!!

On all counts, Pāṇḍuraṅgāshram Swāmījī was a remarkable figure----the first of our Swāmījī-s who had His picture taken so His message and mission could be seen and felt even by those who had never met Him. In an age of difficult communications, (remember it was the 19th century) particularly in the tough Ghāṭ area of North Karnāṭaka, He undertook a long and arduous journey all the way to Prayāg, Kāshī and Gayā (the Tristhalī) taking advantage of newly built rail links (B.B.and C.I.) from South-West coast to the Gaṅgā valley areas. He laid the foundations of a modern settlement at Shirālī, expanding the Mat͟h, giving it a firm foundation, literally and figuratively. After extensive repairs to the main Mat͟h structure, it is surmised that a stone slab bearing the inscription “Shrī Kṛs͟hṇāshram Prāsāda” was placed over the portico. This has been there for long; perhaps H.H. Pāṇḍuraṅgāshram Swāmījī may have named the structure after His Guru. Inside the Mat͟h too, Samādhi-s of His predecessor Guru-s, as existent, were repaired, as were many subsidiary shrines around, giving Chitrāpur the status of a “Ks͟hetra”. The Shivgaṅgā Sarovara and Pañchavaṭī constructions also came up in this era. Besides, He arranged for a post office, a school and a marketplace (weekly hāṭ) to be set up at Shirālī for convenience of residents and visitors. He frequently travelled the Kănara-s, and once even to Călicuṭ (Kozhikoḍe), to maintain close contact with the Mat͟h constituents. Presiding over, and taking interest in frequent Mahāsabhā-s, He was able to put the Mat͟h finances on a sound footing, and (very early, 1862) persuaded His Guru, H.H. Kṛs͟hṇāshram Swāmījī, to inaugurate the Rathotsava for the first time in Mat͟h history, which over the years, became a major socio-religious event in the Community calendar, adding to the popularity of the Mat͟h. Revived again by H.H. Parijñānāshram Swāmījī III in the last century, Rathotsava continues to be a major draw for not only our community (both local and abroad) but many non-Āmchī-s in the surrounding areas. (vintage KSA journals mention that photographs of Pāṇḍuraṅgāshram Swāmījī (at nominal price) were freely available at the venue of Rathayātrā-s even in the 19th century, thus increasing His personal accessibility.)  In popular thought, the Swāmījī has also been widely revered as an incarnation of Lord Dattātreya.

To revisit the brief commentary that accompanies the vintage portrait of H.H. Pāṇḍuraṅgāshram Swāmījī, the missionary tract says “the person depicted here is the Guru of the famous and rich Chitrāpur Sāraswat Brahmin Mat͟h, Swāmī Pāṇḍuraṅgāshram”. It goes on to state that “the Guru was well known for having turned this location (Shirālī) into a “modern and widely successful pilgrimage site”.

I recall, with reverence, that the very first book Shāntīsh Nāyel and I collaborated to digitise for the website www.ChitrapurEbooks.com a decade ago, bringing a different and refreshing experience to us both, was ‘Pāṇḍuraṅg, Pāṇḍuraṅg’. The website is still a work in progress, by the abiding Grace of the Guruparamparā.
Whenever you visit the Shrīmat Parijñānāshram Vastu Saṅgrahālaya at Shirālī, do view this vintage portrait and its accompanying description.