"He Himself Gives You The Strength"

In this heartwarming feature of our ‘Couple- in -Seva’ series, SHARAD and VARADA SOUKOOR share their stories and reach a common conclusion – that when Pujya Swamiji creates a new opportunity for you to do seva   (April 2022)

SHARAD
I was born in Bombay but was lucky to grow up in Honnavar with its beautiful surroundings.Our family had a strong sense of belonging with Shri Chitrapur Math. I remember my visit to the Math with my mother during "Sadhana Saptaha". After my Brahmopadesha my father had taken me to Math to perform Pada -puja at the lotus feet of Swami Anandashram along with him. I get goose bumps when I remember that awesome experience of doing Abhisheka of those Divine feet and placing flowers on them. The blissful serene gaze of P.P. Anandashram Swamiji is still etched in my mind. In later years in Honnavar I had many opportunities to attend the Rathotsava, Abhinava Sammelana and to have Darshan of P.P. Parijnanashram Swamiji. After settling down in Mumbai, Varada and I, with our little daughters, had visited Khar Math on different occasions for Darshan and to seek Blessings of Swamiji. Later, our bank jobs took us both to different, distant places. We were in Bidar in Karnataka when P.P. Parijnanashrama Swamiji attained Mahasamadhi. We were in Kolkata at the time of the Arrival of P.P. Sadyojat Shankarashram Swamiji to Chitrapur Math. We heard a lot of glorious inspiring experiences from our relatives and friends about P.P. Sadyojat Shankarashram Swamiji. We also viewed videos of the Pattabhisheka ceremony. This made us eager to have Darshan of Swamiji. Our desire was fulfilled during our visit to Shirali few months later. After this first audience, we began to feel as if Swamiji knew us since ages. This made our connection with the Guru and Math stronger instantly.

In 1998, we both got transferred back to Mumbai. That year P.P. Swamiji was being hosted by various Local Sabhas of Mumbai. For the first time we could attend Pujan-s, Swadhyaya-s and Ashirvachan-s at different camps of Swamiji. Since I was working in Borivili at that time, I got a chance to work as a volunteer during Swamiji's Borivili camp. I was one of the volunteers at the footwear-counter. That was my very first experience in seva. Swamiji's interactions during the volunteers’ meeting inspired me to continue being in seva. I offered seva as a volunteer in our Goregaon Sabha during Swamiji's visits in later years. In 2001, both of us took Mantra-diksha from Swamiji at Shirali.
In 2008, at the beginning of the Tercentenary Year, we participated in Guru Jyoti Yatra as Sankalpita volunteers. It was a memorable and once- in- a- lifetime experience for all of us. I had the opportunity of carrying the Holy Guru-paduka-s for some distance during that yatra.
In the year 2013, I retired from the bank and during our that year's Chaturmas visit expressed my desire to offer seva on a regular basis. On being asked whether I can come to Shirali, I thankfully agreed to being there for at least fifteen days in a month. Thus started my series of enjoyable trips to the Math and assignments at the Accounts and Seva Departments under the guidance of Late Kailaje mam and Keshav Sorab mam. After these assignments I was given the work of scanning the old records.

In between these trips to Shirali I had got an opportunity for volunteering at Karla during Navaratri celebrations. I was given the Publications Sales counter.

During the Kanakanjali Utsava I was one of the volunteers at the Publications Counter at Santa Cruz. During this event I got Adesha from Swamiji to join the Publications Committee as a member. I was assigned the task of collecting the stock position at various Publication Hubs and consolidating this data in the form of statement every month. I did this till the beginning of lockdown. At present, this is being automated.

I had reached Shirali in March 2020, just before the lockdown was announced. Cases were multiplying in nearby Bhatkal. But we at the Math felt fully protected by the grace of the Gurus. All the precautionary measures were being followed. I immersed myself in my work without worries. I could return to Mumbai only in the month of October after the travel restrictions were lifted. It was during this period at Shirali that I had the divine experience of the 'Guru -Vatsalya' which will be always remembered by me.

VARADA
During my childhood days in Talmaki Wadi, the visits of P.P. Anandashram Swamiji and P.P. Parijnanashram Shishya Swamiji were much- awaited events. Prior to their arrival, we children used to gather at Wadi Hall to make colourful paper flower mala-s for decoration. I loved to attend puja-s and bhajan-s during those days of the camp. It was a festive occasion for the whole of Wadi. Those days I used to attend bhajan-s organised by Gurukrupa Bhajan Mandal which was started by Shirur Gijjupachi of Talmaki Wadi. She used to take us to Khar Math too, during Swamiji's visit and we had opportunities to sing bhajan-s on many occasions in the august Presence of Parama Pujya Parijnanashram Swamiji.

Later, as the years passed, due to college studies, job, transfers and family commitments there was a drift. In 2001, I took voluntary retirement from my job and got involved in Samskrita studies. I completed the Aradhana and Sadhana courses of our Math. When I went to receive the certificate from Swamiji's Lotus hands, Swamiji asked "Why don't you teach?" I had no answer. The idea of standing in front of a group of people and speaking to them used to make me nervous. But I took those words of Swamiji as his Adesha and with a constant prayer in mind started teaching under Girvana Pratishtha. This was the beginning of my seva in the true sense. Slowly, doors began to open, one after another. I got an opportunity to become a Prarthana teacher. My inhibitions went away in the company of innocent children. During that time I was also training participants from our Sabha for the Bhagwad Geeta Competition. I started encouraging the Prarthana kids and their parents also to participate in this and started training them. It became a joyous occasion for both children and parents when they not only participated, some even won prizes also in their respective age- group categories.

Then came the Tercentenary year and with it - a lot of opportunities for seva. A workshop was arranged at Mallapur to impart training to Sabha Representatives in Guru Pujan and I got the opportunity to attend this training and to serve as Co-ordinator of Goregaon Sabha during Sadhana Shrinkhala. Though initially the response was lukewarm since sadhaka-s were hesitant to participate in a new form of sadhana, after several individual demonstrations and practice, a large number of the sadhaka-s got motivated and participated in the event to make it very successful. In the case of Seva Saptaha also people were initially hesitant, but by the Guru's Grace, after listening to experiences of the participants at Sabha functions, more devotees began to come forward to join the Seva Saptaha.

After the Sadhana Shrinkhala was over, many sadhaka-s began to miss the dynamism of Samuhika Sadhana. So, we decided to meet once in a month at the residence of one of the sadhaka-s in different areas of our sabha to perform Sadhana Panchakam. The reverberation of the soulful mantra-s of pujan, powerful chanting of stotra-s and doing the Devi Anushthana created very good vibrations within the home which more and more sadhaka-s wanted to experience by hosting it. Since then this became our regular sabha- level activity. Even though the lockdown on account of the pandemic abruptly put a brake on this, by Guru's Grace within 2-3 months, a way out was found to overcome the obstacle by using available technology and this regular pathan and pujan became a great source of strength to overcome the worries and tensions generated by the pandemic about the uncertain future. In our first online Gurupujan which we tried on 15th June 2020, we played the audio in the Divine voice of Swamiji which itself gave great relief to our stressed minds and since then we began to wait for an auspicious day to perform various online spiritual activities.

Presently, "Girvana Pratishtha" has given me the responsibility of editing their quarterly e-magazine "Girvana Patrika" which is aimed at encouraging writing in Samskrita among students and teachers. This has given me an opportunity to deepen my knowledge about the Devabhasha.

By now, both of us have realized that whenever Swamiji creates a new avenue for us to offer seva, He Himself gives us the strength to fulfill our responsibility by His Divine Grace. We bow in deep gratitude at His Lotus Feet for all that we have received… 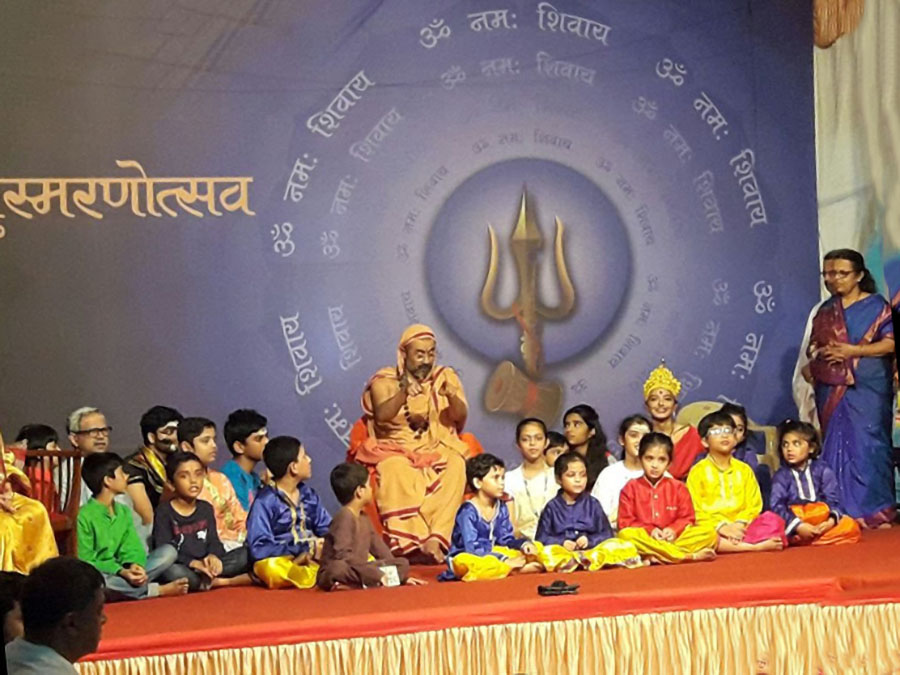