His Guidance, His Grace!

It is a great honour for me to write this article.

I was fortunate to be born into a family which was deeply spiritual. All major Hindu festivals and vrata-s were observed by my grandparents and later, by my parents. My father was very active in social work, serving on the managing committees of Grant Road Local Sabha, KSA, Talmakiwadi Society for many years.

Staying in the “cultural capital” of Bhanaps in Talmakiwadi was a great boon for us as we were blessed by Pujya Swamiji’s annual camp. Guru Swami’s visit to Wadi used to charge up every individual in Wadi and the preparations for the visit used to start months in advance. Every evening Wadi residents used to sit in the KSA Hall making paper “pataka-s”. The entire society used to be decorated with these “pataka-s”.

When Rathotsava was restarted in Shirali, for many years, volunteers from Wadi travelled by buses to Shirali at least a month in advance to help in making arrangements for this momentous event. After Rathotsava, Wadi volunteers used to stay back at Shirali for the winding up operations and more importantly get daily audience with Pujya Swamiji. The Karunamurti used to interact with each one of us and check on any difficulty when faced by us.

First meeting
Unfortunately, I could not visit Shirali for the Peetharohan ceremony in 1997 since I could not get leave from my office. Hence, we made it a point to visit Shirali in May 1997, when we had our first Darshan of Pujya Swamiji. We had an audience with Swamiji in His room on the 1st floor of the Math. I was associated with KSA and Swamiji desired to have more information on the activities of KSA and expressed happiness at the work being undertaken.

In December 1997, we visited Vittal for the Annual Rathotsava. There was a huge contingent from Talmakiwadi and the group met Pujya Swamiji and requested Swamiji to visit Talmakiwadi for Datta Jayanti Utsav. Swamiji assured us that He would surely visit in 1998, when He planned to visit other Sabha-s in Mumbai as well. We were all elated and immediately upon returning to Mumbai started preparations for Swamiji’s maiden visit to Mumbai after ascending the Peetha.

Over the next few months we used to meet on every weekend to plan out on the programme. I was given the responsibility of logistics and security hence used to bother Kodikal Ramkrishnamam regularly to know details of the requirements and make necessary arrangements. It was a dream come true for all of us when Swamiji alighted from His vehicle at Tardeo Circle and sat in a beautifully decorated carriage (rath) to cover the distance between Tardeo Circle and  Talmakiwadi in a procession with chanting of Jaijaikar-s all round.

Many Mumbaikars especially senior citizens who could not travel to Shirali or Vittal were having Darshan of Pujya Swamiji for the first time. They were highly impressed by His personality, His way of talking, His love for the community, His smile, His bhajan-s, His Discourses, His humorous stories!

Personally, this was my first attempt in handling an event of such magnitude and it was a huge learning experience with Swamiji guiding me in areas which could be improved in the subsequent years. We ensured that every year there was a marked improvement in the areas identified in the previous year but also started looking out for new opportunities for improvement. This ensured continuous improvement in organising standards so that PujyaSwamiji had a pleasant stay.

When a Guru takes you under his wings to guide you and protect you–it is a rare Blessing!

The Universe constantly provides us with the right circumstances for our inner growth. In 1998 I was privileged to receive mantradiksha from Pujya Swamiji. Life has changed for the better ever since. We were happy to know from our children Sanmesh and Sanjana that they too were motivated to receive mantradiksha from Pujya Swamiji when they attended the Kar-Seva Shivir in Shirali.

Opportunities for Doing Seva
I consider myself truly blessed that Pujya Swamiji gave me an opportunity to perform seva on numerous occasions.

These 24 years have been a continuous learning experience for me of what being in seva actually means and what it actually does for a sadhaka. I reflect back upon how I have evolved over the years under the Guidance of Pujya Swamiji.I can without doubt state that my success in corporate life has been entirely because of Him. Pujya Swamiji has always been stressing on perfection, on being vigilant, clarity in communication and on maintaining discipline on timelines. Making these factors a habit in daily life has helped me tremendously in corporate life.

Our community is very fortunate to have a lineage of Gurus who, over the years have been guiding the samaja on the path to self-realisation.

Pujya Swamiji has showered His Love and Blessings on the samaja and has been  helping tremendously to channel our mind in the right direction through various modes like conducted meditation, japa and anushthan to attain the true goal of human life …salvation!.

This shloka from Guru Gita sums it all perfectly - 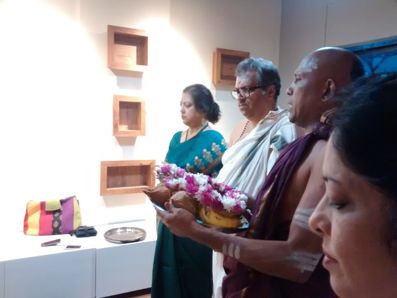 Inauguration of the Samvit Sudha Store 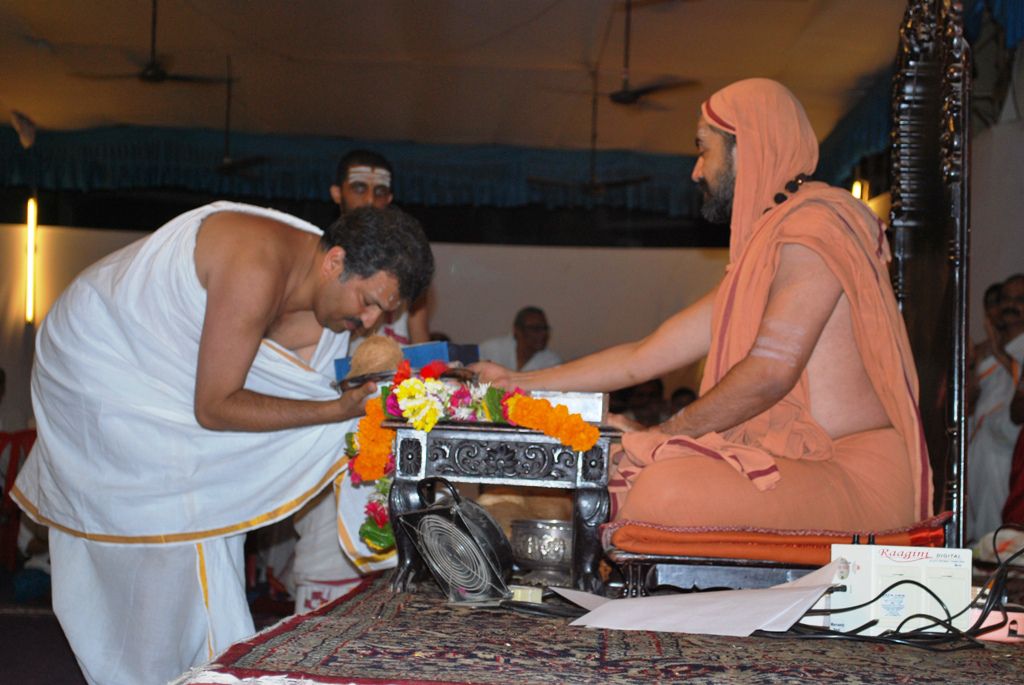