A Productive Sevā in Tiruvannāmalaī

Kavitā Savoor pāchī walks us through the farming activity and management practices - employed at the agricultural property in the small town of Tiruvannāmalaī - which have converted a fallow piece of farmland into bountiful fields of gold. 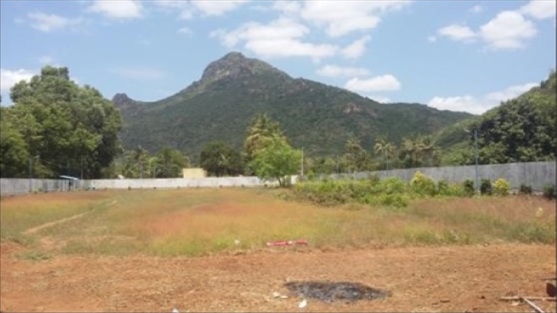 The fallow plot before cultivation began in 2018

In the shadow of the towering yet serene presence of the majestic Aruṇāchala Parvata in Tiruvannāmalaī, long revered as the abode of Aruṇāchaleswara (Lord Shiva), lies a tiny parcel of 0.735 acres owned by Srīvalī Trust, under the umbrella of Shrī Chitrāpur Mat͟h at Shirālī. With the blessings and close guidance of H.H. Shrīmat Sadyojāt Shaṅkarāshram Swāmījī, agricultural activity has been undertaken here since July 2018, and has yielded abundant harvests year after year.

The process of converting this fallow land into viable farmland began by levelling the slightly uneven plot using river sand. Two borewells of depths 350 feet and 513 feet were sunk to secure a plentiful year-round supply of water, particularly during the hot, dry summers here. A local farmer, Shrī Shaṅkar, who has his own fields close by, was employed to look after the day-to-day needs at the farm and extra labour hired as and when required, to help with sowing, weeding and harvesting of the crop.

Floriculture was first undertaken in an experimental way from December 2018 to March 2019 with marigold and asters. Shrī Shaṅkar, who is very devoted to our Swāmījī and our Mat͟h, personally took the bumper harvest as a first offering to our Guru-s to adorn the shrines during the Vardhantī celebrations. The next year’s marigold crop from May 2019 to October 2019 was taken to Mallāpur by him in the month of Shrāvaṇa during the Chāturmāsa.  Excess flowers were also sold regularly in the local market and the returns were ploughed back into the Srīvalī Trust. 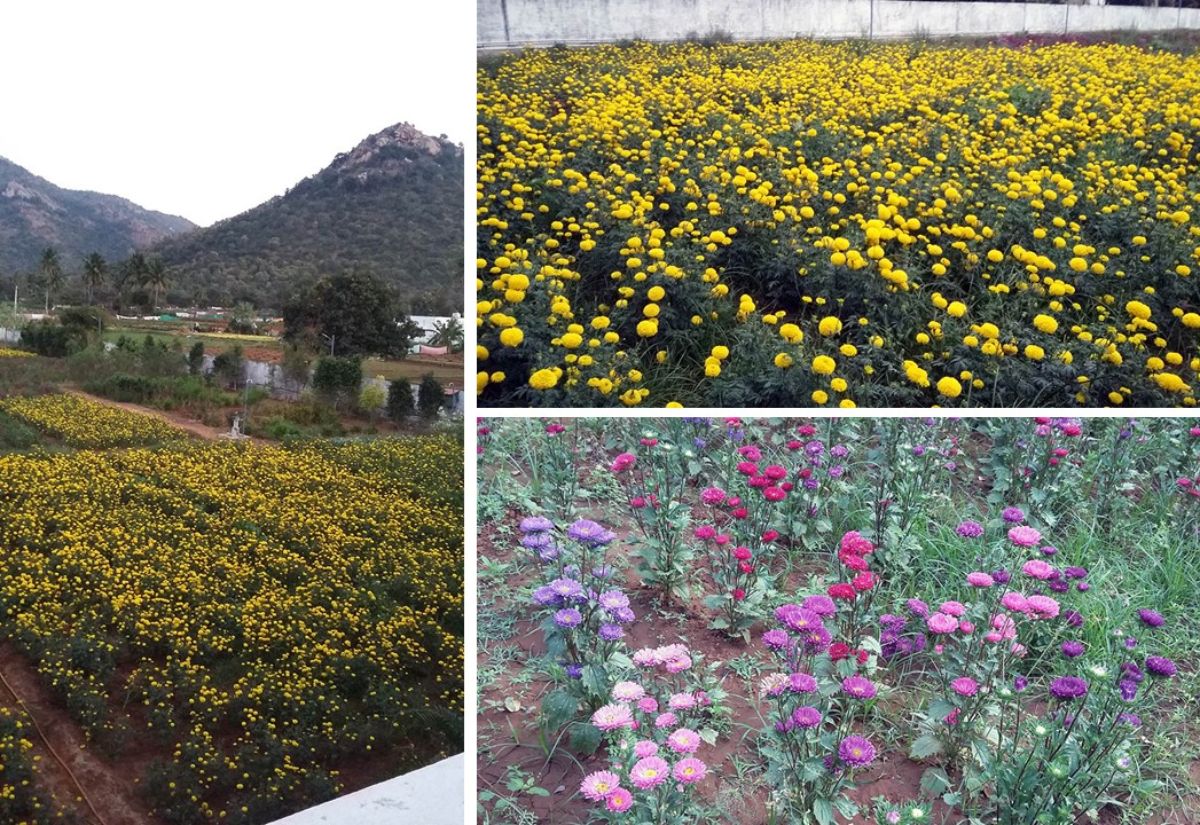 Clockwise from left: 1. Adding colour to the scenic beauty of Tiruvannāmalaī! 2. A Mat of Marigolds
3. Asters in full bloom.
By the end of 2019, in consultation with Shrī Shaṅkar, cultivation was switched from floriculture to regular crops like groundnuts, sesame (til) and black gram (urad dāl), which could be used in the Mat͟h at Shirālī. Initially, the produce was sold in the local market, but with suggestions and inputs given by Shrī Shaṅkar - extraction of oils was found to be more beneficial and economical. 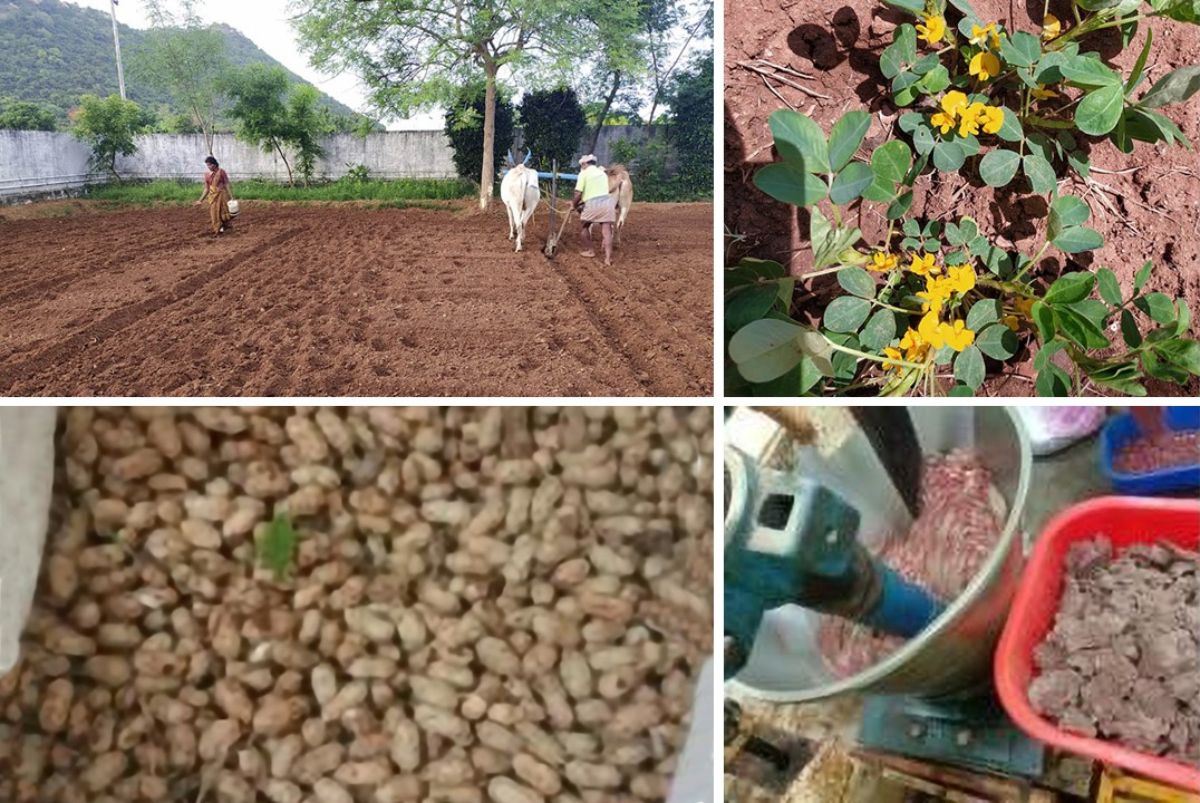 The extracted oils are now sent to Shirālī and the oil cakes generated as a by-product, are sold in the local market. The sale of these oil cakes takes care of the cost of oil extraction.

The coconut palms at the Tirvannāmalaī properties yield a large quantity of coconuts which are shelled and dried. This is later converted to pure coconut oil which is sent to Shrī Chitrāpur Mat͟h, Shirālī for consumption. All produce or products from Tiruvannāmalaī are sent to Shirālī only after approval from Nārāyaṇ Mallāpur mām, the General Manager of Shrī Chitrāpur Mat͟h. The produce from the mango, lemon and chikkū trees is sold in the local market. Since buses from Tiruvannāmalaī were not plying, the last consignment took a detour to BeṅgaĪūru where Satyendra Sorāb mām was instrumental in forwarding it to Shirālī.

Each crop cycle begins with a consultation with Shrī Shaṅkar, and a plan is drawn up taking into consideration the local soil and climatic conditions. This plan is based on forecasts of which crop is expected to give the best yield. Innovations and experimentation are balanced wisely to ensure that new techniques go hand-in-hand with tried and tested traditional farming methods.

Meticulous documentation is adhered to in all procedures and protocols to keep the entire team informed of the latest developments at Tiruvannāmalaī.  The team swings into action once it receives Blessings from H.H. Swāmījī.  Budgets are carefully prepared keeping in mind pre-cultivation expenses, cultivation costs and expected yields.

Whether it is procurement of equipment such as solar lighting or installation of CCTV or managing of UPS batteries or any construction activity related to maintenance of buildings - three quotes are sought from vendors. Their quotes are assessed on the basis of service offered versus rates, after which approval is sought from Praveeṇ KaḍĪe mām, Dilip Māvinkurve mām and Sharad KaḍĪe mām.  Kavitā pāchī ensures that the Trustees are kept informed at every step.

Daily supervision through in-person and remote monitoring, updation of data and documentation are strictly followed at every step so every detail is captured. Local issues, from the weather to weeding, are addressed promptly and solutions are implemented through participative discussions. For instance, after one such brainstorming session, it was decided that to save water, the use of sprinklers would be better than drip irrigation as it suited this type of cultivation better. Collaborative discussion also helped in understanding the economic feasibility of selling crops locally versus extraction of oil.  A deep study and discussions on crop cycle, climate and pests showed how growing millets and paddy would not only require an increased water supply, but would also attract pests and peacocks which could destroy the crop much before the harvest.  Thus, such discussions helped decide which crops would give maximum yield with minimum wastage.

A team deputed from Kārlā by Ajay Shirālī mām visits Tiruvannāmalaī on rotation to help with the maintenance of the property.  The use of bio-pesticides instead of chemical pesticides is the hallmark of the cultivation of the organically grown crops here. Leaf compost generated from the farm’s organic waste is used in the fields in the pre-cultivation stage.

Pre-covid times, Kavitā pāchī along with Paḍbidri Kṛis͟hṇānand mām would go to Tiruvannāmalaī once a month to personally oversee the activities there. But during the pandemic, she monitors activities from her residence in Chennaī using modern technology. Whether it is interacting with Shrī Shaṅkar, paying bills, arranging for groceries, giving instructions to the workforce from Kārlā or having discussions with the entire team - modern technology has come to her aid.  The CCTV setup helps her and the trustees to keep an eye on day-to-day activity at the farm.  No matter what happens globally, work at Tiruvannāmalaī goes on with the Anugraha of our Guru.

The lush green surroundings and a small “Lily pond” add to the natural beauty of this land. Deep trenches at the far end of the fields and the indigenous trees planted at the edge of the surrounding forest by the Forest Department serve to demarcate the fields, and also prevent herds of deer and wild boars from entering the fields. Despite this, deer and boars manage to enter adjoining fields in search of food often destroying the crop.  The Srīvalī Trust property, however, has a compound wall on three sides which protects it from foraging wildlife. Local farmers get around this problem by making temporary “designer walls” using sārī-s and keeping watch at night on their “machān-s”, driving away rampaging animals. 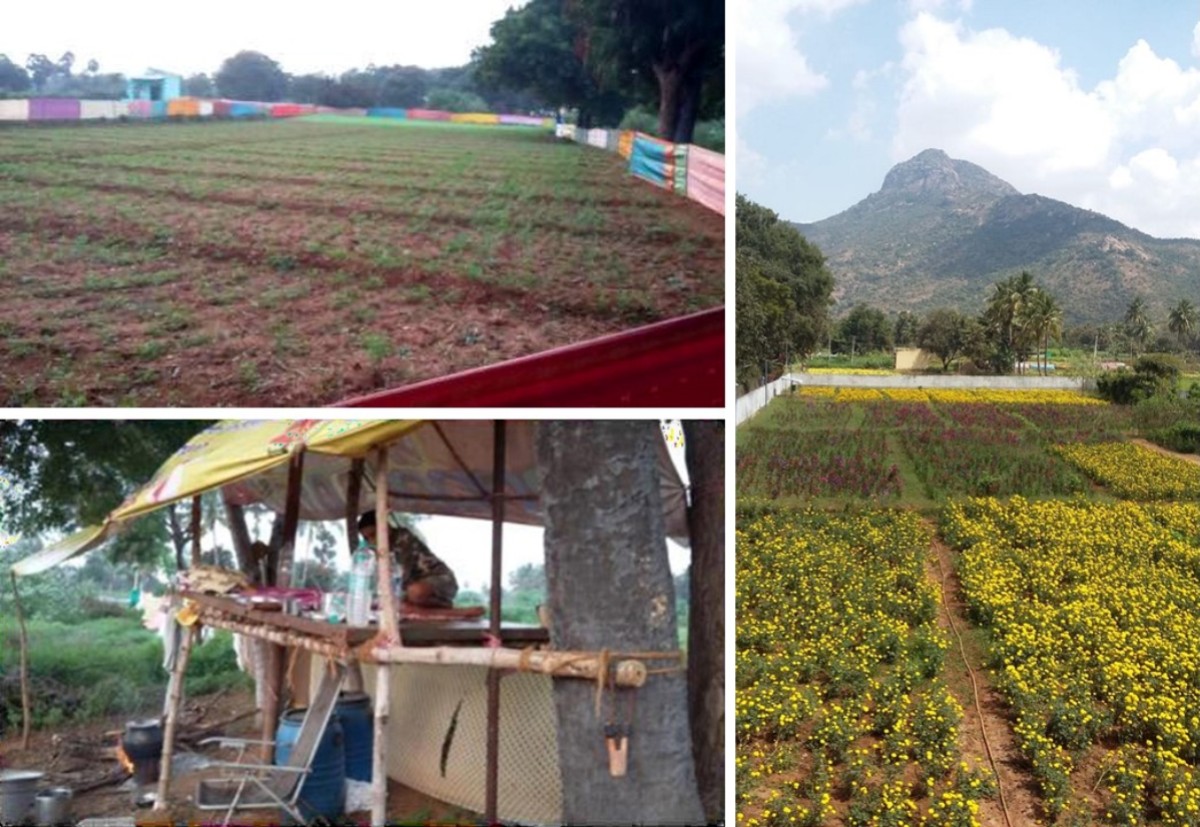 Clockwise from top left: 1.A Designer Wall protects a local farmer’s filed - An innovative idea to
keep wildlife off the field. 2.The majestic Aruṇāchala watches lovingly over our field 3.Keeping
watch- A farmer in his “machān”

This project of converting a once fallow plot into a rich, thriving farmland is testimony to the fact that once we surrender to our Guru, just His kṛpādṛs͟hṭi can help each sādhaka in sevā to bloom and flourish. Our Karuṇāmayī Guru fashions us “karakamalasañjāta” to become productive, efficient and satarka shis͟hya-s.