Mere words can never wholly encompass the magnanimity and illustriousness of a Guru. I consider myself fortunate to have offered Sevā at the hallowed feet of three preeminent Guru-s of our sacred Shrī Chitrāpur Guruparamparā.

I was born into a family in Belgāum whose home was frequently graced by the visits of Parama Pūjya Shrīmad Ānandāshram Swāmījī. These much awaited visits happened at least a couple of times each year during when They were either on the way to, or while returning from their camps and tours to various cities and towns in the North.

After the Shis͟hyaswīkāra on March 1st 1959, our home was for the first time graced by both Guru Swāmī and the young Shis͟hya Swāmījī on their way back from Mumbaī when they stayed for a day. I had the good fortune of serving both Guru-s even after I got married and went to Bombay (now Mumbaī). Parama Pūjya Shrīmad Ānandāshram Swāmījī and Parama Pūjya Shrīmat Parijñānāshram Swāmījī visited our home in Bombay on the 13th of March 1965.

In 1977, on the joyous festival of lights, our home was illuminated by the āgamanam of His Holiness Shrīmat Parijñānāshram Swāmījī. It was on the day of Laks͟hmī Pūjā that Swāmījī arrived at our house, making it a day I will never forget. Our Guru, the very beacon of light and inspiration were welcomed with a Pūrṇa Kumbha Swāgata. It was a moment of realization when we learnt that Swāmījī had brought along with them the pāduka-s of their Guru – Swāmī Ānandāshram.

Later, in 1980, our newly built home in Mumbaī was graced by the sacrosanct presence of Parama Pūjya Shrīmat Parijñānāshram Swāmījī. The eagerly awaited arrival happened in the holy month of Kārtika on Kṛs͟hṇa Paks͟ha Dwitīyā. The atmosphere was vibrant with positivism and joy. Fragrant toraṇa-s and fresh mango leaves adorned the doorways and colourful raṅgolī-s carpeted the floors; During this period many sādhaka-s had the opportunity to perform Pādukā Pūjana. The mornings were consumed in question-answer sessions and the evenings were celebrated with performances by an exquisite assortment of artists: Vidus͟hī Aartī Aṅklikar, Pt. Sharad Sāt͟he and Pt. Devendra Murḍeshwar to name a few. On Thursday evenings, Shaṅkar Shiroor maam’s discourses were held. We felt blessed to have hosted Swāmījī for ten days at our home on this occasion. 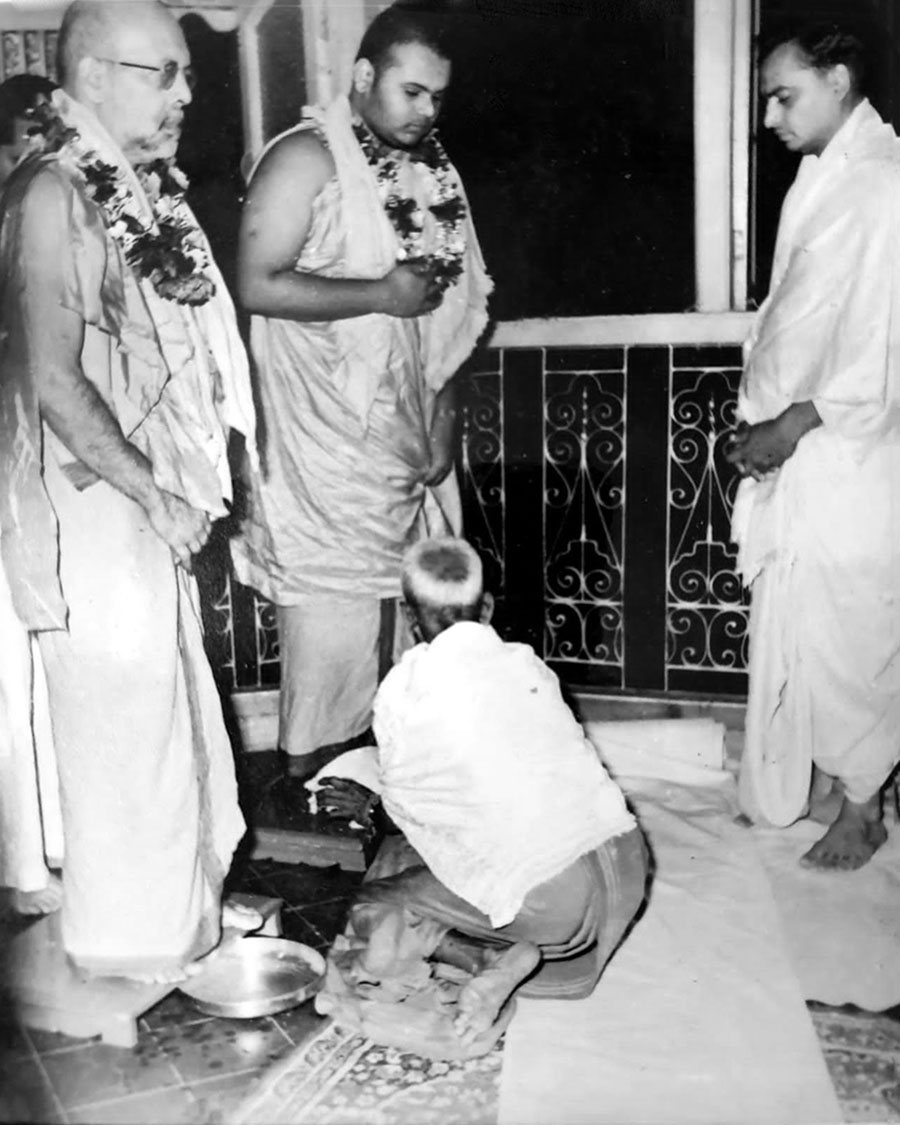 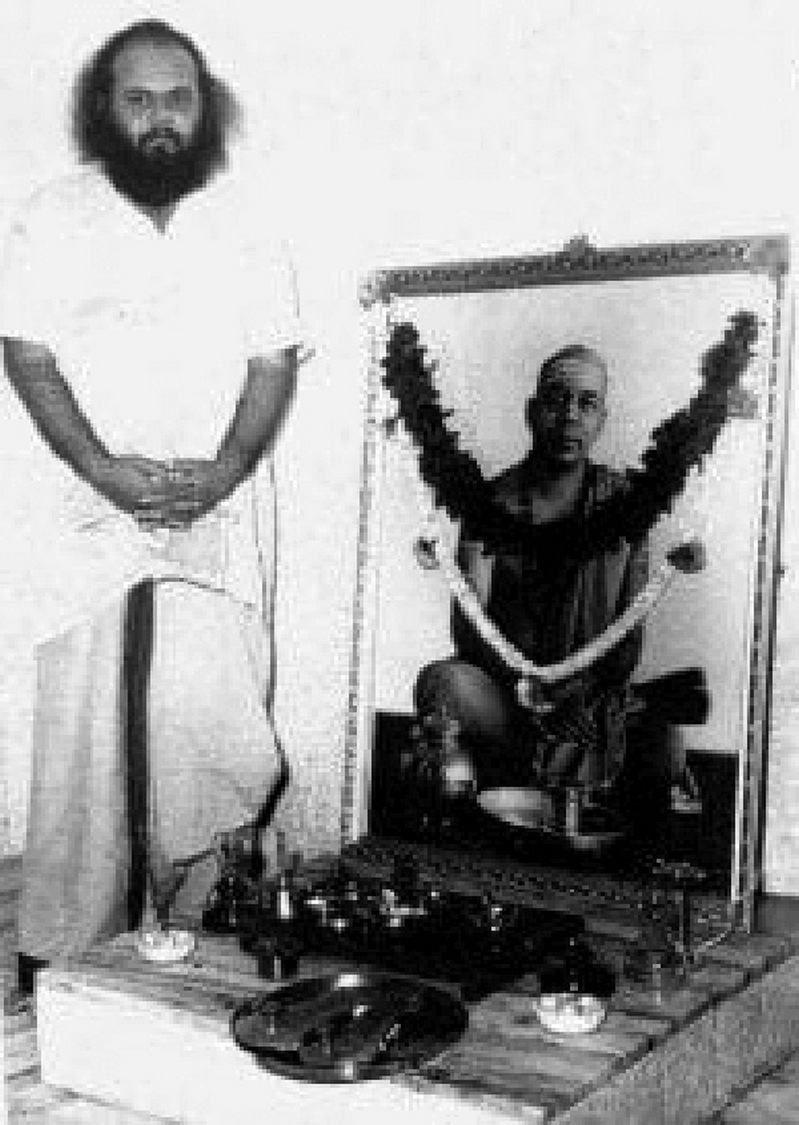 Swamiji at The Chandavarkar Residence

Thereafter, our humble dwelling was frequently visited by Swāmījī. Apart from our family, our house used to be filled with many devout sādhaka-s and also the Gurumātā and the Guru-pitā. People used to flock in the evenings for the Dīpanamaskāra to have a glimpse of the Guru and wait for a chance to interact with Him.

Every visit of Swāmījī is etched in my memory, as fresh as ever, even today. Swāmījī was at our home during the festival of Yugādi in 1989. It is an unforgettable occasion since we got the opportunity to begin the New Year with Their blessings. The festivities commenced with pañchāṅga vāchana followed by a music program. The sādhaka-s who had arrived to participate and seek Swāmījī’s blessings were treated to the traditional pānakpanwār.

In the year 1989, we had the good fortune of having Swāmījī reside at our home during the sacred night of the Kojāgarī Pūrṇimā. It is said that on this night, the moon looks ever so radiant and Goddess Laks͟hmī herself goes around blessing those who beseech the Divine Mother. Bhakta-s present sang bhajana-s late into the night. Momentarily we escaped from the clamorous cacophony of Mumbaī, the serenity of the night consumed us all, and the presence of the resplendent Guru ensured that the memory of this day would be forever etched in the hearts of all those present.

We had the fortuity to travel with Swāmījī on Their various tours. In the year 1983, 16 sādhaka-s including the Guru-mātā and Guru-pitā, journeyed across various pilgrimage sites in Mahārās͟htra. A 6-day long road trip covered six holy towns: Dehu, Āl̄andī, Mahāḍ, Pālī, Gāṇgāpur and Paṇd͟harpur. It was in the venerated Vit͟hobā Temple in Paṇd͟harpur that we witnessed our Swāmījī performing the S͟hoḍashopachāra Pūjā of the deity. 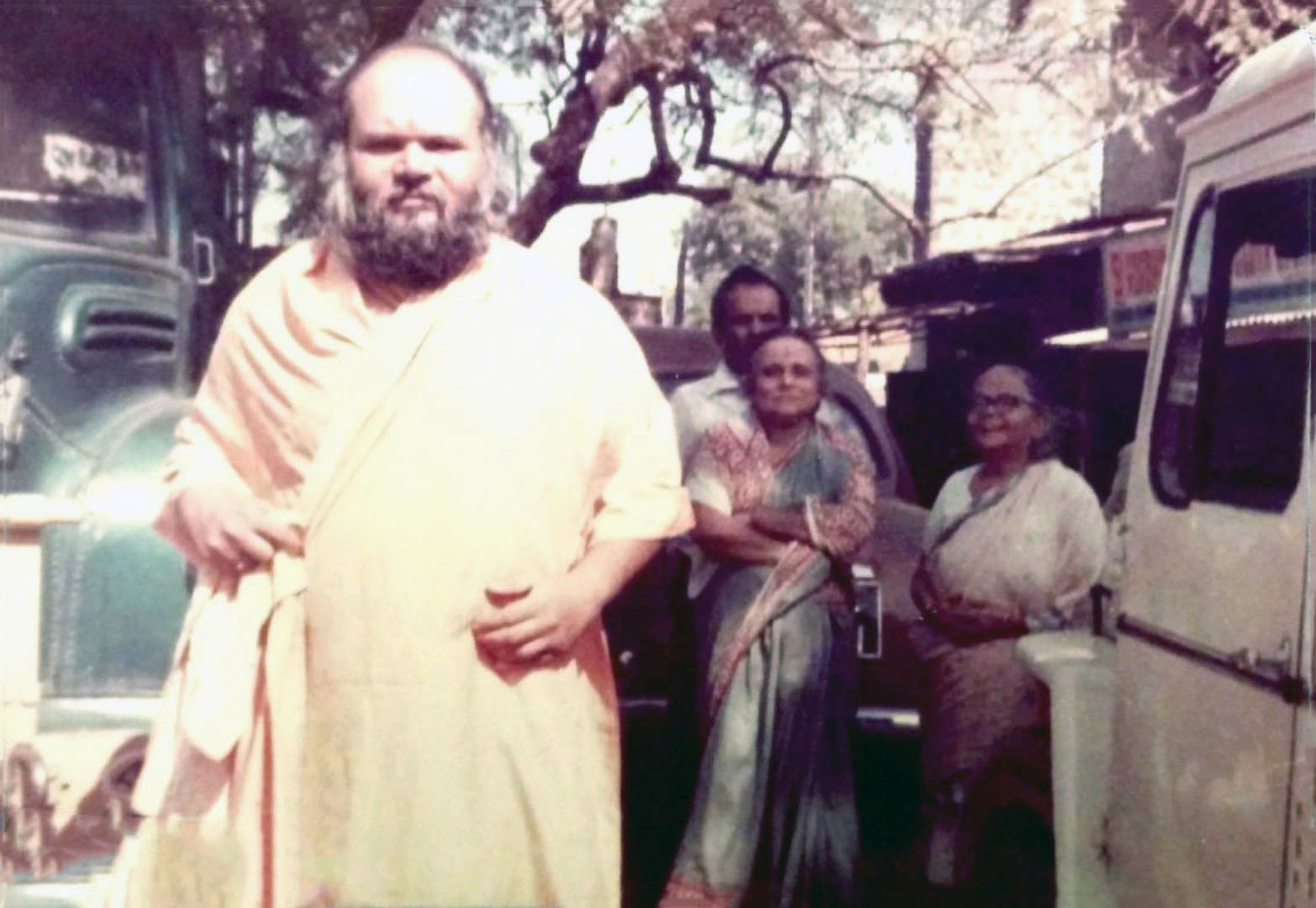 We also accompanied His Holiness on their International Gītā Yajña Tour in the north. Swāmī Chinmayānanda had invited Parama Pūjya Swāmījī to their āshrama in Siddhabāri. We embarked on a long train journey to reach the picturesque Himālayan valley nestled cozily between the mighty mountains.

Our omnipresent and omniscient Guru was once invited by a gentleman named Mr Lāwaṇḍe to inaugurate his chemicals factory. Those of us who had accompanied Swāmījī were fascinated at the wondrous workings of the gigantic machines and the mystifying nature of the various chemicals that the factory dealt with. Mr. Lāwaṇḍe, being a good host initiated an explanation regarding the working of the chemicals and the machines. Midway through his explanation, our Swāmījī took over and explained the very complicated process and abstruse workings of the massive and sophisticated machines. Everybody was stunned, and Mr. Lāwaṇḍe was stupefied and speechless at the fact that Swāmījī knew explicit details of the machines and chemicals. Astounded by the depth of Their knowledge which was far-reaching and detailed, covering various diverse topics, the sādhaka-s present there bowed down in deep reverence and respect at the Lotus Feet of Parama Pūjya Swāmījī.

Swāmījī’s love and affection toward animals is well known. Swāmījī had a Doberman called Julie. Swāmījī had foretold in the year 1991 that Julie would bear 7 puppies in the future. Out of the seven there would be 2 females and 5 males. Swāmījī had even predicted the intrinsic details of the puppies; They had mentioned that at the time of their birth, one would be born considerably weaker and thinner and also that among the seven puppies, a single one would be brown in colour, the rest being Black. In 1992, a year after Pūjya Swāmījī’s Mahāsamādhi, Julie delivered her seven beautiful, lustrous puppies exactly as predicted by the Guru.

We were fortunate indeed to be granted the priceless opportunity of performing Kanakābhis͟heka of Parama Pūjya Swāmījī on 28th of November 1990. It was a long awaited wish that was finally fulfilled. Amidst the recitation of the Shrī Sūkta by the vaidika-s present, this venerated ceremony was conducted.

On the 28th of August 1991 just before Swāmījī left for Beṅgal̄ūru, my late husband Shrī. Vivek S Chandāvarkar was called to Kārlā. On going there, he was blessed with the good fortune of performing the very last Pādukā Pūjana of Parama Pūjya Shrīmat Parijñānāshram Swāmījī.

Even after Their Mahāsamādhi on 29th August 1991, thanks to the proximity between Mumbaī and Kārlā my husband and I would frequently visit the hallowed shrine of the Kārlā Durgā Parameshwarī Temple and the Jāgṛt Samādhi of our Swāmījī. We consider our life to be fruitful as we got the benefit of performing Sevā at the sacred feet of our Guru-s. The firm affirmation of belonging, being guided by, and being constantly blessed by such a dynamic entity as Swāmījī gave us the required inspiration and motivation to go through the ups and the downs of life smoothly.

To conclude, I want to reiterate that a Guru is such, that no words can circumscribe or describe Him. Swāmījī were so much more than what even finest words can describe, irrespective of the language used. I offer my humble praṇāma-s at the feet of Lord Bhavānīshaṅkar and all the Gurus of our sacred Guru Paramparā for having given me the priceless opportunity of Sevā and exalted my life with their guidance and blessings.