Parijñānāshram Swāmījī’s Jñānānand Āshram in Kārlā, was built in 1986. The āshram is nestled in a valley surrounded by the Sahyādri mountains on all sides. Devotees and volunteers used to regularly visit the āshram to have a glimpse of the Guru.

That year a few devotees including the Guru-Mātā and the Guru-Pitā, Shāntpāchī and Shaṅkarnārāyaṇ Shukla mām (fondly addressed as Shaṅkanmām), were residing in the divine environs of the āshram. It was a profound and long-awaited desire of mine to know more about Swāmījī's childhood. I seized the occasion during that visit in 1986, and I got a chance to interact with Guru- Mātā Shāntpāchī one idle afternoon. It was then that Shāntpāchī elaborated on the details of Swāmījī's childhood.

Shāntpāchī began by telling us of her first encounter with the transcendental when she was blessed with the divine sight of The Shrīvallī Gaṇapati. The Lord himself inspired her to get married to Shrī Shaṅkarnārāyaṇ Shukla mām of Shirālī.

The elders of both families were immediately consulted and soon the wedding bells rang. The couple settled in Shirālī and were elated when they realised that Shāntpāchī was expecting her first child. The expectant mother was treated to a life of serenity and tranquility in Shirālī. The regular Darshana of the revered Guru –HH Shrīmad Ānandāshram Swāmījī - witnessing the sacrosanct pūjā of Shrī Bhavānīshaṅkar, the consumption of the holy tīrtha, regularly attending the Dīpanamaskāra followed by the As͟ht͟hāvadhāna pūjā... indeed the saṁskāra-s of the Veda-s,  Mantra-s and vibrations of love, vātsalya were steadily being absorbed by the unborn child.

It was a common practice to honour married couples after one finished partaking and participating in pious observances such as fasting and pilgrimage. Bhānap-s from the metropolitan cities would often visit Shirālī after completing the "Sohlā(16) Somavāra Vrata". Before the culmination of this particular vrata, it was a tradition to give "Vhāṇṭi" to 16 married women and honour their spouses too.  As per custom, pregnant women were generally excluded from such ceremonies. Invariably, though she was expecting, Shāntpāchī was invited to such celebrations, since they would always fall short of the 16th couple. Thus, even before the birth of this Yativarya, He had removed the superstitions(“mūḍanambika”)  from the minds of thepeople!!

Swāmījī’s birth was a Divine event in itself. Throughout her pregnancy, Shāntpāchī would have  visions of snakes. These recurring visions made her a little apprehensive. She spoke to her father-in-law who not only pacified her but also assured her that it was an extremely positive omen, and that she would have the privilege of being the mother of a “Yogipurus͟ha”. How right his predictions were!! When she went into labour, Shāntpāchī was ultimately blessed with the vision of a huge golden hued, seven hooded serpent, followed by the birth of the child, on 15th June 1947.
This child was named Ravindra Shukla.

The few of us who were listening to her narration were spellbound.
Even as a child, whenever little Ravindra visited the Shrī Anantheshwar Temple at Viṭṭlā for the S͟has͟ht͟hī festival, he had the darshana of the seven hooded Nāgadevatā. He would innocently ask the other children who had accompanied him, whether they too had seen the seven hooded Nāga, but of course they were not as fortunate as this special child who was granted the darshana by Lord Anantheshwar Himself.

Whenever Shāntpāchī would bathe little Ravi, He would suddenly look so huge and would appear like Swāmī Rāmdās with a Kaupīna. He was probably hinting to Shāntpāchī about his life ahead!! His childhood pranks, would baffle the neighbours as these were in line with the childhood days of Lord Kṛs͟hṇa; he would suddenly be seen on the top of the tiled rooftops of the house giving darshana to the people around! He was the darling of all people living in the vicinity. 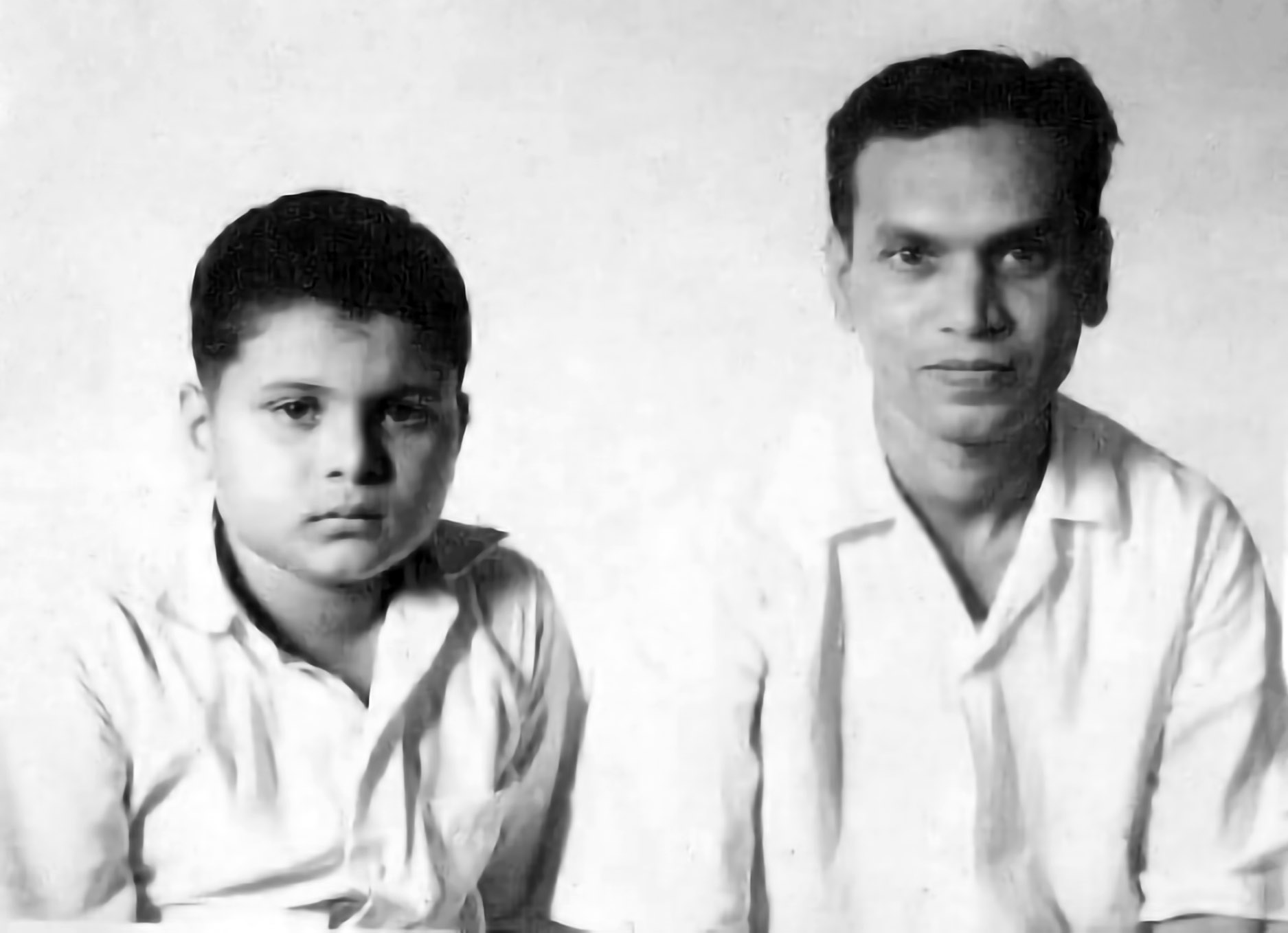 Ravi was a chubby, sweet child. Whenever Shaṅkanmām would visit the Mat͟h with little Ravi, Ānandāshram Swāmījī with a loving, witty smile would say:

Little Ravi was a regular at the Mat͟h and would not return home without the darshana of Ānandāshram Swāmījī. He would partake of  his food only after Swāmījī’s Bhiks͟hā was over and obtaining the Bhiks͟hāprasāda. Such was His devotion towards to His Guru even at a young age.

Life in Mumbaī & the school days : 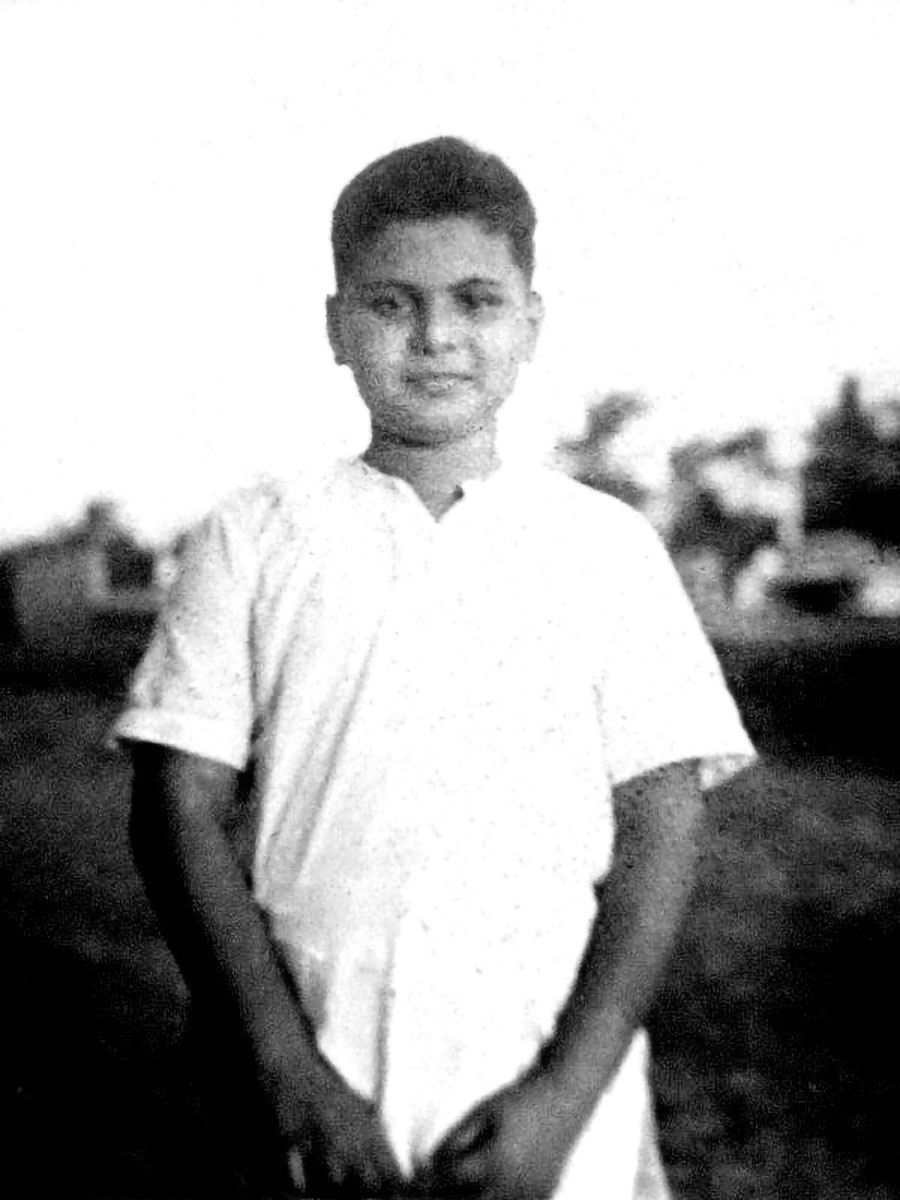 Shaṅkanmām shifted base from Shirālī along with the family after he was offered a job in Mumbaī. By then Ravi had a little brother Shashī, and they accompanied their parents to Mumbaī. Ravi got admission into Poddār High School in Sāntācrūz.

When the day came to meet the little boy, he was at school, so a few of the Committee Members decided to personally go and meet him there. On approaching the school Head Master, they were guided to Ravi’s classroom. What greeted them was quite unexpected!
On enquiring about Ravi, the class teacher pointed to the boy who was standing on the bench, and the members had no difficulty in getting a good look at the future Swāmī!

What was the reason for Ravi to be made to stand on the class bench – was it a punishment? – ‘No,’ said Shāntpāchī, and added, ‘A classmate of Ravi had played some mischief in class, and the teacher had demanded the name of who was responsible for it. Ravi took the blame upon himself to protect his class mate from the punishment that was sure to follow. The teacher had then made Ravi stand on the bench.’…. And that was the moment that the Standing Committee members reached Ravi’s classroom. It was easy to identify Ravi from a distance, without disturbing the class!

On inquiring about the blame that Ravi took upon himself, pat came the answer, “If the teacher had used the ruler to punish the classmate,(which was the standard punishment meted out in those days) it would have been fatal. I therefore took the blame and avoided the disaster. I could definitely bear the pain”. This attitude of patience, taking the pain with a pinch of salt, and helping out people in grief remained forever, from being Ravi to Swāmī Parijñānāshram.

The connection with the serpent God continued:

Parijñānāshram Swāmījī used to visit an old dilapidated temple on a hilltop, near Shirālī. After one such visit, Swāmījī returned to Shirālī and noticed that his sunglasses had been left behind. When He went back to retrieve them the devotees who accompanied Him were surprised to find a cobra guarding it!! As Swāmījī approached, the cobra quickly made its exit through the gap between His feet. This unusual occurrence left an indelible mark in the hearts of the stunned onlookers. When Swāmījī visited the farm in Beṅgre, the caretaker told them of a huge snake that would regularly visit his small hut and sit atop Swāmījī’s photo, and would leave only after it payed its reverence to Swāmījī. There were similar instances at Murḍeshwar temple, Kollūr Mūkāmbikā temple, and many more such incidents are known to have happened.

The grandeur of a Realized Master remains undiminished and untouched even when he has given up His physical coil. Swāmījī’s Samādhi at Kārlā is a Sañjīvanī Samādhi. A very recent incident proves this wonderful fact. The resident purohit at Kārlā went inside the Garbha Gṛha of the Samādhi to perform the daily pūjā, only to find a Nāga coiled round the Liṅga. The devotees who had assembled for the pūjā witnessed this awe-inspiring scene with great reverence, and the serpent soon slithered away. These extraordinary events give us veritable assurance of His eternal presence and grace which serves great solace to every Sādhaka, every Seeker.

This is the greatness of the God incarnate Lord Bhavānīshaṅkar my Guru Swāmī Parijñānāshram !!

My experience - The Darshana of Lord Bhavānīshaṅkar

In the Dhyāna Mandir, Swāmījī was sitting at the extreme end of the room, and as I entered and looked towards Swāmījī, what did I see – Lord Bhavānīshaṅkar Himself Virājamān!! I walked towards the Lord, along the pathway leading to the end of the room where Swāmījī was seated. As I walked towards the āsana kept for me in front of Swāmījī , I could only see Lord Bhavānīshaṅkar... upon reaching the āsana, I slowly bent down to place the “Pal̄eru”( the plate containing coconut, fruits, flowers and Guru Kāṇika) on the floor. With the soft sound of the metal plate touching the ground, the Dṛshya of Lord Bhavānīshaṅkar vanished and in His place was my Guru Parijñānāshram Swāmījī, with a “Mandasmita” – a gentle smile – looking towards me. I got my Mantra and happily returned to Beṅgal̄ūru after the 1976 Rathotsava.

I had never shared this experience with anyone for 2 years. In the year 1978 when Swāmījī was observing Chāturmāsa at Beṅgal̄ūru Mat͟h, Question & Answer sessions were being held regularly. During one of these sessions, an elderly lady sādhīkā asked the question: “Swāmījī, what is the difference between Dṛs͟hṭānta and Sāks͟hātkāra ?” Swāmījī looking at me in the audience and said to the lady, “Check with Suniti Naimpal̄l̄y for the answer.”

I was taken aback on hearing this statement, as I did not know what the answer was!

As soon as the Question & Answer session ended, I sought permission to meet Swāmījī and ask what answer I should give to the elderly lady.
On meeting Swāmījī I put across my question: “Swāmījī, I do not know the answer to the question raised by pachi, kindly enlighten me what is the difference between Sāks͟hātkāra and Dṛs͟hṭānta“

Swāmījī : The day you received Mantra japa, the Dṛshya – the vision – that you had of Lord Bhavānīshaṅkar is “Sāks͟hātkāra”. Whereas, “Dṛs͟hṭānta” is when I visited your home time and again in various forms, once as a maid servant seeking curd rice on a cold rainy day, another time when you raised your hand to hit your mischievous little son and your hand stopped from delivering the blow when you saw ME in his place: that was Dṛs͟hṭānta. On yet another occasion I came to your doorstep in the guise of a Sannyāsī asking for coconuts… Swāmījī narrated the entire conversation that I had had with the Sannyāsī …this is called Dṛs͟hṭānta…I was astonished listening to the entire explanation !!Then Swāmījī went on to say :"साक्षात्कार  एकपंता  जाता  आणि  दृष्टांत  अनेकपंता  जाता..""
“ Sāks͟hātkāra happens only once whereas Dṛs͟hṭānta happens many times.”

With loving praṇāma-s I place this small offering at the Lotus Feet of HH Sadyojāt Shaṅkarāshram Swāmījī on the eve of the 25th year of Paṭṭābhis͟heka Jayantī.