“…from every moment, every movement…”

The Janma Divasa of our Beloved Parama Guru Parijnanashram Swamiji III falls on the 15th of this month. To commemorate this auspicious day we bring you Nandita Madhav’s sensitive account of many precious moments spent in the sacred Saanidhya of Guru Swami and how much she learnt             (June 2021)

From a very young age my grandparents and parents had drilled it into our minds that the Guru is a walking- talking God ! (chaltaa boltaa Bhagawan)

In the year 1976, when we visited Shirali during Rathotsav, I got to see my walkie- talkie God at close quarters, dealing with the bhattu-s, sadhaka-s, the laity, volunteers .... Those memories of the Rathotsav are so vivid even to this day !! I had had the darshan of Swamiji earlier too, but the year 1976 stands apart and is still fresh in my mind.

Each visit of ours to Shirali was such a treasured event. First, we looked forward to His welcoming glimpse as we entered the main gate of the Math. We would see the radiant smiling face of Swamiji sitting against the window on the 1st floor, welcoming the laity and this was always our first darshan of Guru Swami.

Topmost among Guru Swami’s many qualities that made me revere Him was His unconditional love towards the young and old, human beings and animals, the physically challenged and the fittest, his ardent devotees and most importantly, even the  people who opposed  Him  ! He had the same kripadrishti towards one and all.

His exemplary patience, which every sadhaka experienced, was one other such learning for me. I try hard to implement this  in my day- to- day life to date ! This reminds me of one satsang, wherein a devotee- couple was reprimanded by an authoritative person about the time they had spent with Swamiji. When Swamiji was updated about this incident He had asked- “Have  you not learnt to have patience equivalent to even a single strand of my hair”?  These words still ring in my ears.

Paraphrasing Guru Swami’s loving nature best of all was His compassion and concern whenever He interacted with Shukla Pandurang bappa. Pandurangbappa was mentally challenged, but always longed to be in Swamiji’s Presence and seek His Attention. Swamiji, too would always look out for him whenever He returned to Shirali from any tour. Swamiji’s actions were always louder than words and hence, to document the love He displayed towards everyone is indeed, tough. All I can humbly say is, it was this pure and abundant love that He showered that transformed my thinking to believing, and then, from believing to practising, or trying to actually live His actions. That is how I realised what true and unconditional love is... 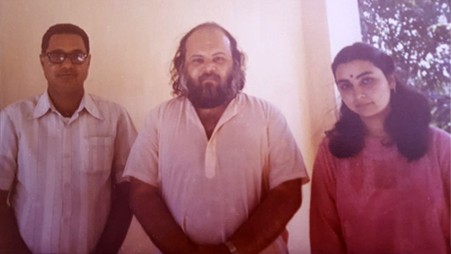 Guru Swami’s love for animals and people and the manner in which He treated  both animals and human beings was one and the same. He never liked a dog being addressed in that fashion. He would always insist that it should be called by the name given to it, in other words, like any other human being. Dolla was the plump, cute, snow white Pomeranian and obviously, her name said it all! The black Dobermann, who made everyone smile at his antics and who anxiously awaited Swamiji’s return each time He went away, was called Suraj! While the loving Kalyani at Karla was, without doubt, an ardent devotee from a previous birth.Then, of course, there were the loving pigeons who clustered all around Him and Dattabal - the horse who would fret all day  till he saw Him.

Swamiji’s entire way of looking at things was strikingly different. One example of this is the museum He set up at Shirali to house innumerable, centuries-old idols recovered from depleted old temples and given a safe place to be honoured with the reverence which was their due ! Why, why would Swamiji want to get into this act ? The very gesture and effort taken to give ‘new life’ to many a neglected idol revealed His unfailing Love and nurturing attitude towards all – even to the inarticulate!

As kids, whenever we visited Shirali, Swamiji loved to take us for a drive with Govinda the official driver, or with Swamiji Himself behind the wheel and we would be treated to a tall glass of ice-cream - the famous Gadbad, which we eagerly looked forward to. Children always felt that they were engulfed in His Love.

We were fortunate to visit few temples in and around Shirali and Karla with Pujya Swamiji and experience the awe inspiring happenings which took place in the precincts of the temple during such visits. We went on such tirtha yatra-s to Dehu, Alandi, Pandharpur, Kollur Mukamabika, Kadavinakatti Durgaparmeshwari temple and many other pilgrim spots....

Whenever Guru Swami visited us at our residence, it became a very festive, Diwali- like occasion. The entire planning, the rising enthusiasm to receive God incarnate was enough to put us all in a state of deep wonderment ! This is certainly not  an experience that can be put down in black and white!! Our entire family, as well as extended family members, CYMA (Chitrapur Young Men’s Association) members would plan meticulously from the very first act of receiving, to organising programmes, events, outings with the volunteers, et al... Each time, we felt that such a golden chance for the entire family to be in seva was in itself the opportunity of a lifetime and we hold these precious memories close to our hearts.

Swamiji had desired and expressed that each individual, each Amchi family should chant the Deepanamaskar daily so that every household remembers all our Acharya-s and bows down to the holy lineage of our great Guruparampara!! This advice, to inculcate the sacred value and purpose of chanting the Deepanamaskar daily at a specific time, has been followed reverentially in our home.

Speaking of Guru-mahima, or miracles experienced by devotees, I would like to share an experience narrated by the doctor who was blessed in this wondrous manner so that he could do his duty -

Swamiji was camping at a doctor-devotee’s residence. One night, an elderly patient with his little grandson rang the bell of the doctor’s residence! Upon opening the door, the doctor found the old man was in grave pain, needing the doctor’s assistance immediately. It was well past 11pm... but, after examining the old man, doctor advised him to get admitted immediately in his hospital which was just next to his house. The old man got admitted and called his son to take his grandson back home. For he to be operated immediately for the removal of an inflamed appendix. The patient was wheeled into the Operation Theatre and the hospital staff was readying everything for the operation, when there was a sudden power shut down! The disturbed doctor waited for some time for the invertor to take over, but there seemed to be some major problem! Feeling helpless, he rushed back to his residence and telling Guru Swami of his dilemma sought His Blessings.

Just go to the OT, and perform your duty, our blessings are with you !” he was told. So the doctor rushed back, changed and when he went into the OT to operate what did he see – a bright beam of light like a huge overhead torchlight appeared right on top of the operation table, focusing on the area to be operated!! The doctor performed the operation, laid down the equipment, and then- the bright light just vanished! All the staff members present were astonished to witness such a miracle right there in front of their very eyes! The doctor rushed back and fell at Swamiji’s Feet thanking Him profusely, while tears coursed down his cheeks. He knew, without doubt, that it was none other than His Guru who had ensured the successful completion of the emergency-operation.

What spurred staunch bhakti in me was Guru Swami’s down- to- earth attitude. You could easily think that He was like any one of us…and yet, He kept astonishing us with the vast range of His knowledge- be it spirituality, space and technology, the worlds beyond sea and skies, anything and everything. This continually made a mesmerising impact on my mind for each visit, each meeting with Swamiji was truly like a new beginning, a novel learning experience..

One of the most precious moments in my life was when I was initiated into mantra-diksha! I was keen to receive mantra-diksha from Swamiji, but I was told that one needs to be an adult (I was only 13 then!) to receive it. But when Swamiji was informed, He agreed to fulfil my wish and my joy knew no bounds! It was then that Swamiji stated - “Age is not the criterion, mantra -japa is given to the soul and not to the human body “

Exactly seven years after that, I was told that I would be given mantra-japa once again by Swamiji ! He obviously knew this would help me in my life, and yes, it definitely did. It has been the spiritual force that has given me the strength to face reality, to offer my seva and do my sadhana ever since. It has helped immensely to overpower each big wave of adversity and prevented it from engulfing me. It has empowered me to face every disturbing incident with feeling helpless or forsaken.

Sometimes, Guru Swami would suddenly say - “Today so and so will be coming with the following requests to seek blessings .... I can see the person from top to toe like an X-ray machine and also his intention, the agenda with which he or she comes to meet me......”   This was another profound experience. 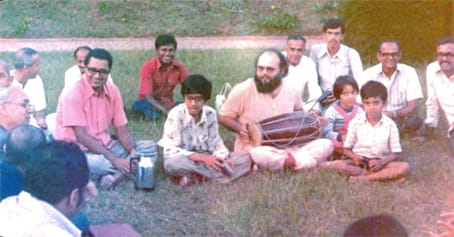 Guru Swami loved musical instruments. He played the tabla, dholak, harmonium and I had the good fortune of being present on such memorable occasions. Swamiji was also immensely interested in operating His ham radio and in collecting stamps and rare coins.

I got to learn a lot from every moment, every movement and every action of Pujya Swamiji. Even a casual statement would set me thinking deeply and offer so much learning ... He had once told my parents casually, very casually that He would take His last breath at our home. This was foretold 12 years before He actually took Samadhi and yes, it happened at our home, just as He had said.

Swamiji had an amazing eye for detail, micro management, plus an astonishing memory. He could instantaneously recall when, where and in what connection He had met someone. The eternal spring of unconditional love that Parama Pujya Guru Swami showered on all sadhaka-s is now nurturing our spiritual growth and protecting us every minute through His devoted Shishya – our Beloved Mathadhipati- Parama Pujya  Sadyojat Shankarashram Swamiji, for the Guru-shakti is one and the same! 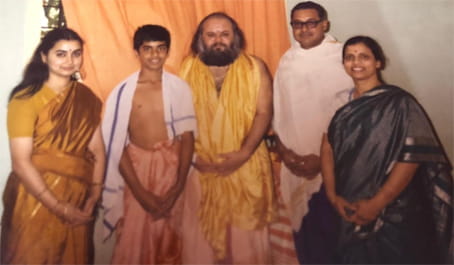