The Call Of My Âtman

The year 1997 heralded a new beginning in my personal life. Marriage brought me into a new family and there were new roles and responsibilities. 1997 was also a significant year for the Chitrapur Saraswat Samaj when Parama Pujya Shrimat Sadyojat Shankarashram Swamiji became our 11thMathadhipati.

In the same year in December, my husband and I participated as volunteers in Swamiji’s camp at Goregaon, where we lived. Though my paternal family was originally from Shirali and I had visited Shri Chitrapur Math many times in childhood, this was the first time I had involved myself as a volunteer in any Math programme. It was also the first time I saw Swamiji and was deeply influenced by His Holy Sannidhi.  Little did I know then that this was the start of a new journey in my life.

I took Mantradeeksha soon after that, but my connect with the Math was limited to visiting Swamiji’s annual camps in Mumbai– I was a  sadhika, yes, but family obligations and work as a computer professional kept me busy. Another turning point came when motherhood led me to give up the computer field. At that time, I was encouraged by my mother to learn Sanskrit to keep my mind gainfully occupied. The Girvanapratishtha courses of our Math were a Blessing and after completing the first course in one of the first batches, I offered to become a Girvanapratishtha teacher. Learning and teaching Sanskrit gave me an opportunity to make friends with other like-minded sadhaka-s. More seva opportunities followed, both for teaching and creating course-content. I also got a very fulfilling opportunity for seva as a Prarthana teacher. At the same time, I was also running my personal Sanskrit classes for school children, while handling other family duties.

It was only when tragedy struck that I realised how much this connection with the Math meant to me. In my darkest hour, the only beacon of light was my Guru, my Trâta. It was only Him that I reached out to. I do not recollect even calling up my family members, or friends for help.

When life took a sudden turn and there seemed no hope,
When all I could see was darkness and knew I couldn’t cope,
I told myself –
Don’t despair, stay calm, know that He is with you,
He is your Guide, your Master, your Guru

When uncertainties of life, before me stood,
When my questions had no answers, when nothing seemed good,
I told myself –
Faith can move mountains, know that He is with you,
He is your Guide, your Master, your Guru
Shattered by life’s blow, when I fell at His Feet,

When my tearful eyes and His tender glance did meet,
He said to me -
I can feel your pain, I know what you seek,
All happens for a reason, but tears are for the meek,
Get up, smile, stay strong in the Now,

You know how to give, so give more and receive Love.
I told myself –
Just surrender with devotion and He will see you through,
He is your Guide, your Master, your Guru 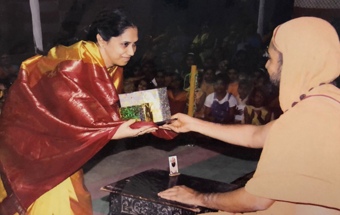 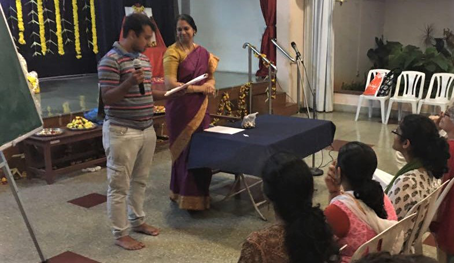 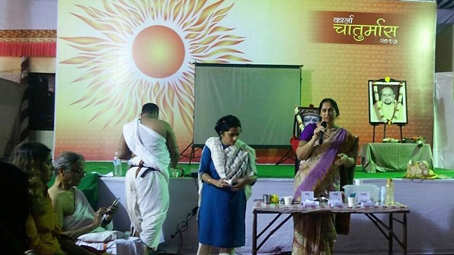 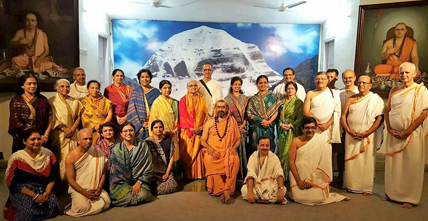 Both my husband Tanmay and me, could come to terms with our personal loss only because of our implicit faith in Swamiji. I chose to make peace with my situation by offering more seva at His Lotus Feet. My only goal in life now was to strive to grow from a sâdhikâ to a devoted shishyâ–this was the call of my Âtman now.

Thereafter, I committed my full time to seva and got full support from my husband Tanmay for this. One of the first tasks given to me was to design an online Sanskrit course for  sadhaka-s overseas. My knowledge of both computers and Sanskrit proved to be of immense help and Girvana vaikhari started taking shape. Simultaneously, I was thrown into a whirlpool of Math activities – Sanskrit sessions at  Yuvadhara Shivirs, NRI Shivirs, Shivirs for other Saraswats and Samvit sadhaka-s, Ninad and Pranayam sessions for Math visitors, and much more. Shivirs were occasions to bond with other sanchalaka-s and shivirarthi-s and a great place to learn. All those who were closely connected with the Math, now became my extended family. I will be forever grateful for all the love they gave me and are still giving me. I also travelled to many places where Swamiji’s camps were held and met so many people. Soon, as Swamiji’s volunteer, I had acquaintances, friends and well-wishers in a number of cities in India, as well as abroad. Life was once again filled with Light and Love.

I gradually learnt what it meant to be one of Swamiji’s core volunteers – accepting course corrections humbly, understanding subtle hints given by the Guru, listening carefully to understand His Aadesh and Upadesha, giving up all the fears and inhibitions which bind and preparing to come out of one’s comfort zone to take up any given task  and then, striving to do your best.

Many a time, I would be told to conduct Sanskrit sessions at different camps. Often, these were extempore, or with minimum preparation and few resources. Though I was able to pull them off with games and stories, I was personally happy teaching Sanskrit using my knowledge of computers to make sessions more engaging. Often, we are unaware of our strengths, but our Guru knows how to gently goad us in the right direction. It was only with the making of the Sanskrit videos on our various Math projects that I discovered how more than 15 years as a Sanskrit teacher had prepared me to speak Sanskrit fluently. Once the script was planned, I was able to narrate with just a little bit of homework. Learning about film-making, planning, shooting, et al were just additional take-aways from that project.

Therefore, during the pandemic, when I was directed by Swamiji, who knew my affinity for teaching children, to do short videos to introduce Sanskrit to children, it did not seem difficult. Thus started the making of the video series - Kallolah. While Tanmay stepped in as videographer, I became busy with the visualising and planning of the script, composing of both  songs and poems. Travel was not possible due to lockdown restrictions and all the team members, located in different cities, had to work from their respective homes.

Smita Naimpally pachi and Kavita Karnad pachi joined in enthusiasticlly to do illustrations for the series. Gautam Mavinkurve mam and Shamala Mavinkurve pachi and later, their son Chinmay composed music for the songs and poems with great zeal. With the help of Shantish Nayelmam, who offered technical guidance and Nitin Shingare mam of Anushravas, who did the editing and gave the final touches, every episode was put together successfully. The CPC team patiently reviewed each episode to ensure that it was ready to be uploaded to the website. After the release of every episode, we would wait with our fingers crossed to see how it was received.

Over the last 10 months, Kallolah has notched up a fairly good number of dedicated viewership and we have continued the series till date. Every step in the video- making process brings great joy and fulfillment. The final outcome never fails to remind how the Gurushakti manifests in each task and I am filled with both gratitude and awe for the Grace of the Divine Mother.  When little children tell me that they enjoy watching Kallolah and enquire about the release of the next episode, I bow in reverence to HH Swamiji for His Love which I receive through these children.

So much has happened in just four years. Committing oneself to seva means being prepared to accept the pain of your Guru’s Nigraha in order to value His abundant Anugraha. All of us make plenty of mistakes on this challenging journey and the only way forward is to humbly acknowledge them and keep doing what is expected from you, devoutly. The ever-compassionate Gurumauli is very forgiving and one Smile is enough to wash away the yesterdays and prepare you for the next task, which will always be- yet another challenge.

With sincere effort one can always experience both the Divine Presence and constant Guidance. In short, if you have a higher spiritual goal then, remember, your Guru is your Only Refuge.