“A Deep Sense of Belonging”

Ever since His Holiness Shri Sadyojat Shankarashram Swamiji took over as Mathadhipati in February 1997, being Grant Road Sabha members, we as a family used to participate in the Datta Jayanti festival celebrated every year in Talmakiwadi. However, our participation used to be restricted to just attending the events without any involvement in the Math administration.

It was on 1st March, 2007 when, upon our request to meet with Parama Pujya Swamiji, Late Vinod Yennemadi mam (who was the then Standing Committee President) arranged for a private interview along with Praveen’s parents. Swamiji spent almost two hours with us to understand our family background, Praveen’s professional background, his other interests and Chetana’s interests in painting and music. At the end of this interaction, Parama Pujya Swamiji asked all of us, including Chetana’s parents, Praveen’s parents and some of our close family members to visit Shirali for about a week in the second week of April,2007 after the conclusion of Rathostav.

We stayed in Shirali for a week. In the serene surroundings of Shirali, far away from the rustle and hustle of the city life of Mumbai, we spent more time in getting fully immersed in the holy atmosphere of our Shri Chitrapur Math. Apart from visiting the Samvit Sudha facility, the Srivali school, Kembre farm and Panchavati, we as a family and Praveen in particular spent a lot of time with Parama Pujya Swamiji to understand the importance of religious and spiritual aspects in life, as well as the importance of our Shri Chitrapur Math Guruparampara. A significant time was also spent in understanding the administrative set up of our Shirali Math and the roles played by the various trusts and committees for the Math administration. At the end of this one-week period, when the time came for our return to Mumbai, Praveen had already made a commitment to Parama Pujya Swamiji to participate in the Math Administration. In less than two months, in the Standing Committee meeting held at Mangeshi temple in June 2007, he was inducted into both the Administration Committee and the Standing Committee.

Over these thirteen years, both of us have travelled to many places in the country as a part of our Math activities. Most of these travels were during Parama Pujya Swamiji’s camps, for Chaturmas vrata or special puja-s that were performed by Parama Pujya Swamiji in many temples, or centres of religious importance. Participation in homa-s, havan-s, puja-s was an integral part of this period. Over the years, the Vedic hymns and prayers have started becoming more discernible. Both of us had taken mantra-diksha in the early part of our initiation into Math activities; and it has now become part of our daily routine.

Before we got inducted into seva, we had a major personal tragedy in our lives which had completely shaken not only us, but also our immediate family members. Active participation in Math activities has helped us to come to terms with our loss and given us the strength to face it. It has helped to achieve the balance between mental strength and calmness, which is required to face the unforeseen challenges in life.

Praveen:
Since 2007, I have been fully involved in the administration of the Math. With Parama Pujya Swamiji’s continuous Guidance, Motivation and Monitoring, it has been a seamless transition from a totally corporate life to a beautiful combination of a corporate and spiritual life. The gradual blend of these two so-called conflicting and contrasting lives has been so wonderful and satisfying that now there is no conflict between these two identities. Math administration work has given me a lot of scope for doing seva for the community and society and in the process has changed my outlook even in my corporate world. While making some important decisions in my corporate role, instead of looking at the point merely from the point of pure commercial considerations, I now try to work on how my commercial entity can make a difference to the society in a sustainable manner. Making profit is an essential element for the survival of a commercial organisation, but it is also essential from the point of supporting and sustaining the society through its product or service offerings.

I feel that these thirteen years of my involvement in Math work has removed some of the irritants like anxiety, anxiousness and even perhaps the fear of the unknown. A sense of self-confidence and positivity has settled in my whole thinking process without any extra effort. Even during these last six months of working from home, this feeling of calm and positivity has remained with me.

Chetana:
Oil/acrylic painting had always been done by me as a hobby, but it took on a new purpose and meaning when I, by the Grace of our Lord Bhavanishankar and our Guru, completed the red-and-gold Bhuvaneshwari and the Lord Dakshinamurti painted in blue and white tones (both in the year 2008). I also got the opportunity to work along with Deepa Murdeshwar and other team members for the Adi Shankaracharya Shadowgraphy project in 2011. As a part of this project, workshops for Prarthana kids and Yuva-s on shadow puppets were also conducted in various places. In 2014 I became the project co-ordinator and then the co-ordinating editor for the ‘Parijna’ series of books, which are books for children imparting human values while cultivating a deep love and respect for our cultural heritage and Mother Nature.

Highlights of our life in seva:

Over this period of thirteen years, the bond our entire family has with Parama Pujya Swamiji and the Math has strengthened so much that the carrying out of the Math activities has become a way of our life and daily routine. Our son, Kartik, lived abroad for a long period of 10 years initially for his graduation studies and subsequently for his work and post-graduation. He returned to India in 2013. He believes that interacting with Parama Pujya Swamiji from 2007 onwards and observing the way his parents had benefited from the Math activities, has had a very positive effect on him. He became a member of the Yuvadhara, was part of the Vantiga Collection and Monitoring (VCM) team and has wholeheartedly participated in many activities and Math celebrations.Working now in Delhi, he has a hectic work schedule, but he and his wife Tanya (nee Gangolli) are committee members of the Delhi local Sabha. Their nishtha is strengthened further when they visit Swamiji and the Samadhi Maths. A deep sense of belonging to our Guru and Guru Parampara envelopes our family in all folds of our lives. 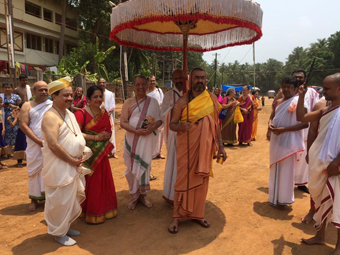 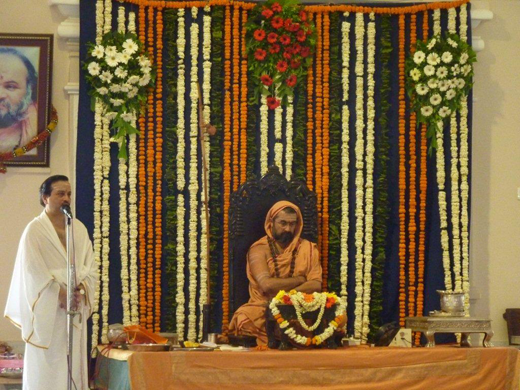 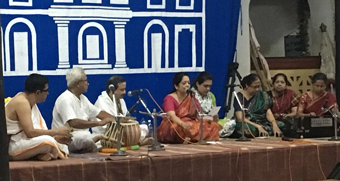 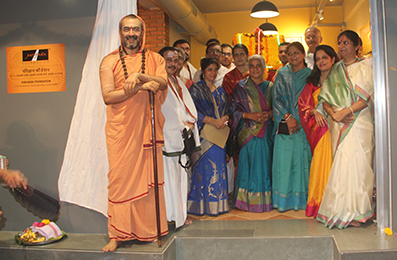 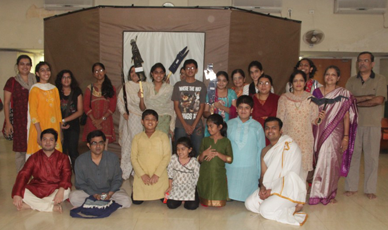