“The Journey Has Been Magical..."

From ‘monkeying’ around as a camera person, working-round-the-clock as a News Channel honcho, to initiating creative sparks on our website www.chitrapurmath.net, team-head SHANTISH NAYEL declares that, thanks to our Inspirational and Dynamic Mathadhipati- our Beloved Swamiji,…        (October 2020)

1999, Delhi : We heard that our Mathadhipati -H.H.Sadyojat  Shankarashram  Swamiji was coming for a short camp. The news electrified all Amchis of Delhi and people like me, who had grown up in the years

when the Math was a distant destination and memory threw up misty images of having Darshan of our Parama Guru -H.H. Parijnanashram Swamiji III in the room on the first floor of the Math. I really did not know how to react to the news that our Mathadhipati would be Blessing us with a visit. For, after a Masters in Mass Communications, I was working with a News Channel and the job kept me dreadfully busy. My passion was camera, so I was pretty much on the frontline of News gathering, which meant the timings were totally unpredictable.

H.H. Swamiji’s visit is etched in my mind, because I was hopping around clicking pictures at every possible opportunity and also trying hard to video tape everything I could simultaneously (The slang-term ‘Monkey’ comes to mind, which is used in Television News to describe camera persons.) HH Swamiji, patient as ever, graciously granted interviews to everyone from the Delhi Sabha who sought an audience and thus happened the first meeting. I do remember experiencing a sense of awe as we went in, for I had never come face-to-face with such an embodiment of Holiness before this. I was simply unprepared. The harsh, hard-as-nails, dry-as-bones world of Television News had only brought me before ‘Godmen’ of dubious distinction, or people with reputations one does not mention in polite company. All of that was washed away in that first meeting. My first impression was the same as it is today... I felt a radiance, a calm, something unique about that measured manner of speaking, that confident demeanour, something that whispered of another-worldly resonance… and of course, the most obvious observation…our Swamiji is so young!

As my work got progressively hectic, I could snatch precious little time to participate in Math activities. Meanwhile, H.H. Swamiji’s Love and Concern had engulfed the community and His healing touch met with a grateful, adoring samaja. The initial audio CDs with Swamiji’s bhajans started appearing, then the Swadhyaya-s, Ashirvachan-s and later, videos too. Our children -Vaibhav and Jayati, born in the mid-90s, grew up to the hum of these playing in the background all the time. My wife Sandhya, the pillar around whom our household revolved, maintained her sadhana through thick and thin, making sure the new-found connect with the Math was kept alive. Be it paying Vantiga regularly, observing festivals, offering seva-s, and making sure we paid regular visits to H.H. Swamiji whenever possible. I was never a multi-dimensional person who could skilfully juggle the material and spiritual, but, thankfully, Sandhya was. So when the time came for Vaibhav’s Upanayanam, we happily made our way to Shirali. Once again, we had the chance to meet with H.H. Swamiji, whose ever-present smile, and twinkling eyes had, by now, become the screen saver of our mind’s eye. It was then that I received mantradeeksha.

Cut to Bengaluru, September 2018. We moved lock, stock and barrel from Delhi. I had tired of the TV News industry and sworn off that line of work for good. A short-term assignment in Hyderabad had also been completed. I had finally figured out, that there really is a lot more that the nation wants to know.  Since 2014, Jaishankar Bondal maam and I had been running a website called  ww.chitrapurebooks.com. Objective? Converting out-of-print books written by Amchis into e-books and making them available for free downloading.  As an extension of that, we had also created a database of books written by Amchis and were startled to document well over 3,000, and this, only by searching online!

Around the time we moved to Bengaluru, that website had already received several queries requesting that the iconic monthly-The Chitrapur Sunbeam (Ravikiran) be digitised and made available. Sandhya and Rajeshwari Hemmadi pachi suggested that I put my experience to work, this time for the Math, and we reached out to H.H. Swamiji for Blessings to embark on the project. That was my first step into doing anything directly in seva. There were several starts and stops, a couple of complete write-offs, scanner tests, some purchases till we were finally on our way. In September 2019, just as we were completing digitising the first 25 years of The Chitrapur Sunbeam, almost on cue, it happened…

Sandhya and I were suddenly called by H.H.Swamij to be part of the Website Management Committee to revitalise that platform. Soon, thanks to Pujya Swamiji again, we had a full- fledged team with content writers, designers, editors… etal. Meetings were held at every possible opportunity in Shirali, Karla, Vittla, Bengaluru. Through these long meetings, I suddenly became acutely aware of things I had never paid a thought to. To start with, it was impossible to expect HH Swamiji to take a break. He can go from one meeting into another with premium alertness, focus and drive. That is what inspired and continues to inspire all of us. 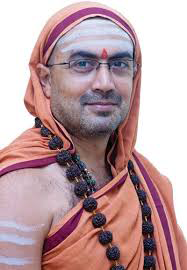 Blessed are we by the Gurushakti of a hallowed Parampara, that guides our community and forever protects it … In 1997, it blessed us with a young and dynamic Guru. With His blazing advent, the sunshine on our spiritual path became brighter, giving fresh impetus to our sadhana and exuding an ever-present warmth to comfort each and every person who sought counsel.

Some of us would find even a single meeting taxing, for the level of intensity it packed, but not  Swamiji. The level of detail that Swamiji expected us to be prepared with was often surpassed by the incisiveness of the questions we faced from Him. Sure, there were tea breaks and Daya maam’s dosa-s now and then, but through all of that, the single-minded focus on the eye of the fish was never lost. Strengthened by His hands-on approach and a well-defined roadmap, the Committee jumped into deepening and expanding the content on www.chitrapurmath.net from mid-March 2020…. which proved to be the time to begin- just before the COVID19 lockdown was announced. With a team that brought in diverse experience and skills, and the ever-present Guidance of H.H. Swamiji, we started out on an exciting road that will hopefully make the website a prized portal to our Math, the Guruparampara and the abundance showered on us in so many ways, by our beloved and tireless Guru.

The journey since then has been magical, even shockingly serendipitous. Here are some of the things that have happened on the website since March 2020: From the point where we used to receive 500 pageviews a day, we now get over 3,000. A new section named Pariprashnah where HH Swamiji’s experiences are shared in His own handwriting was launched on Guru Purnima -5th July 2020; The first 10 years of the Chitrapur Sunbeam are now available on the website along with the most recent ones; The Shri Chitrapur Guruparampara Charitra Pathana and Shravana audio is now available; Sudha Tinaikar pachi’s talks on the Bhagavadgita are webcast live every Wednesday; a new Little Ravikiran page section has been added; A new episode of the video series-Navaspandana- containing choice excerpts from Swamiji’s Ashirvachans on select topics, enjoyed by children and adults alike, is released every Thursday; Kallolah is another episodic Sanskrit-Konkani-English series, enjoyed by children and adults alike, introduced recently. The entire SCM Audio series (totalling over 2Gb) of Bhajan-s and Stotra-s in H.H. Swamiji’s voice is available on the website too. Apart from this, dozens of videos, articles, audio clips have also been added since March 2020.

At the beginning of this piece I had mentioned the rather hazy memories of the Math I had carried through the first 3 decades of my life. I look at my children today and cannot believe what a delightfully contrasting collage of lively, colourful and happy images they will carry through their lives: of a Math that is constantly buzzing with spiritual activity, outreach programmes that bring succour to surrounding communities, Prarthana Varga, Yuvadhara, Samvit Sudha, Parimochana, Sabha-s that move from one activity to another through the year…

The list is long, this is the inventory(…and still counting) that all Saraswat children have inherited as part of their proud heritage. It gladdens the heart to know that our strong-rooted children will step into the wide world, confident of their identity and fortunate to be the beneficiaries of a hoary 3-century- plus spiritual tradition that has found new life in the Holy Hands of Parama Pujya Sadyojat Shankarashram  Swamiji -a  Mathadhipati who, like all the 10 Mahatmas who preceded Him , has surrendered His All in seva of the Math, the sacred Guruparampara and the spiritual uplift of the samaja.