It was almost a year back, that our Pujya Shrimad Sadyojata Shankararashram Swamiji had made a Sankalpa of visiting Mount Kailash & Lake Mansarovar. Upon obtaining the blessings of Lord Bhavanishankar & the Guru Parampara, HH entrusted the task of preparations to a band of devotees

It was almost a year back,that our Pujya Shrimad Sadyojata Shankararashram Swamiji had made a Sankalpa of visiting Mount Kailash & Lake Mansarovar. Upon obtaining the blessings of Lord Bhavanishankar & the Guru Parampara, HH entrusted the task of preparations to a band of devotees. Thus began the preparations for this momentous Yatra. But little had we anticipated the response from our small Bhanap community, where numbers multiplied till we reached the mark of almost a hundred eager & enthusiastic band of pilgrims. Preparations began in earnest with passports, Medical Check-ups, rigorous exercises and all the paraphernalia that goes with a visit to cold climes at high altitudes. As the Departure Day arrived, news of an impending three-day Nepal Bandh loomed large. But Swamiji took it in His characteristic stride & announced a three-day impromptu Shibir at Hotel Everest in Kathmandu. And then HH boarded the flight with almost an entire planeload of pilgrims bound for the Kailash Yatra.

The Bandh began on the 27th of May 2001and we spent an utterly memorable three days in Hotel Everest doing Satsang, Swadhyaya, Vimarsha etc. On one evening, Monisha Bharadwaj, Alka Lajmi, Neelima Khade & Susheela Mehta enthralled the audience with their dance presentations on Lord Shiva & Bala Krishna Leela. We visited the Pashupatinath temple, sang Bhajans & witnessed the evening's Maha Aarti of the Lord. As Swamiji strode grandly with His majestic Danda, on the streets of K'mandu along with the procession of devotees, it was simply an awe-inspiring sight. Clusters of street watchers parted way to let us move on to the temple. Of course, it was simply a great tuning for the travel ahead & we were converted from mere tourists to pilgrims on a spiritual journey. 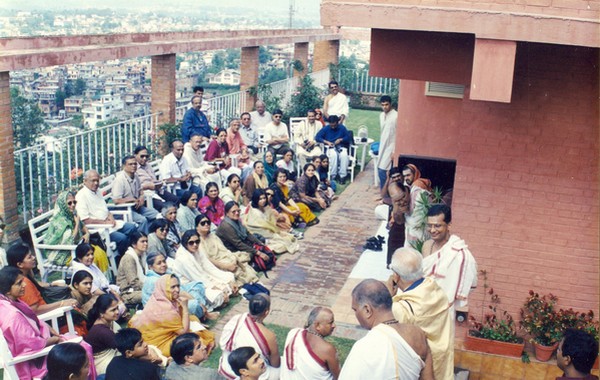 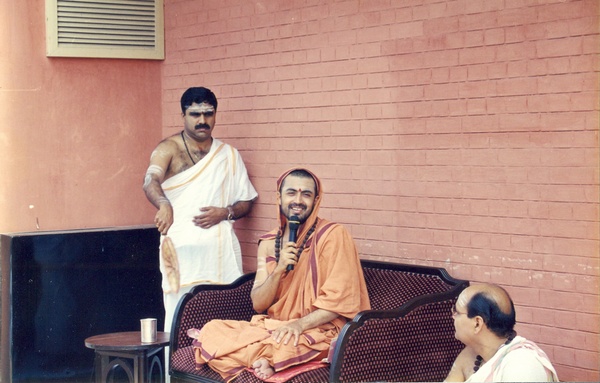 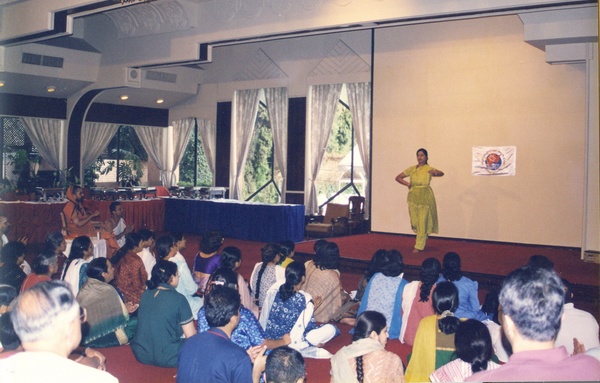 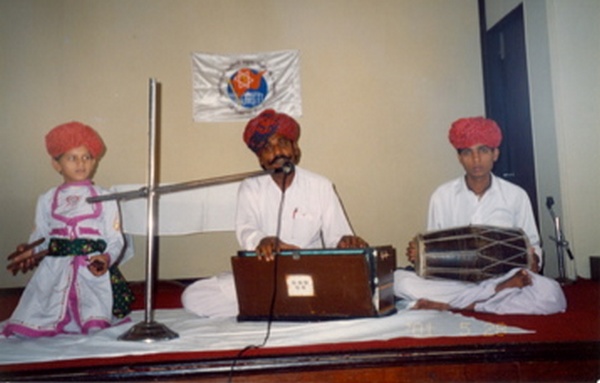 At The Shibir in Nepal

We left K'mandu on the 30th of May'2001 in buses & reached the Nepal China Friendship bridge on the border at Kodari. After a hasty lunch, we crossed the border at noon & boarded Toyota Land Cruiser Jeeps which would take us to our ultimate destination & back. We reached the Immigration offices only to be told that they had closed since Beijing time is almost 3 hrs ahead of IST. We stayed in a border town, Jhangmu, completed the formalities the next day & proceeded to Nyalam at 12,000 ft. The landscape changed from lush green jungle to shrubs and then to just bare rocks,sand and snow. The mountains turned bare but were topped by white gleaming snow, which was a pleasure to watch as we proceeded further on dusty desert country roads or sometimes just tyre tracks. We were now beginning to face the problems of acclimatization. Throbbing headaches, nausea, vomiting, upset tummies etc were very common, especially amongst those who were not on the drug Diamox, which is supposed to reduce acclimatization ailments. But we recovered soon enough. The hotels had warm beds but atrocious toilets or none at all and that I must admit was an ordeal throughout our journey. We proceeded onwards to Saga at 14,000 ft, on the banks of Brahmaputra where we camped it out in two-man tents. These tents cramped for space although, were very warm & cozy. Crossing the Brahmaputra was an experience by itself.

We, along with our Jeeps/Trucks, crossed the river by these quaint launches which were drawn along with rope chains by a vehicle on the other side of the river. This took up almost three hours by the time all our Jeeps crossed but we had a wonderful Satsang on the riverbanks singing Bhajans & reciting Stotras led by Swamiji Himself.

It was at Paryang (14,500 ft), where we heard the news of the ghastly tragedy which had struck the Nepalese Royal family . Our entire Sherpa team was absolutely shell shocked. The King is the representation of Lord Vishnu for the Nepalese, whose prime deity is Lord Shiva & King Birendra had played the role to perfection. We offered our condolences to our Nepali brethren & shaking off the sad news, we proceeded onwards through the Mayumla Pass at 17,000 ft to Lake Mansarovar. I was so overwhelmed on seeing the blue, glistening, serene waters of the Lake created by Lord Brahma himself, that tears overflowed as I prostrated in Saashtaang Namaskars to the Holy Mansarovar. As the sun set on the horizon, the Jeshta Pornima moon glistened like gold on the waters of the Mansarovar, which was splendorous sight to watch. 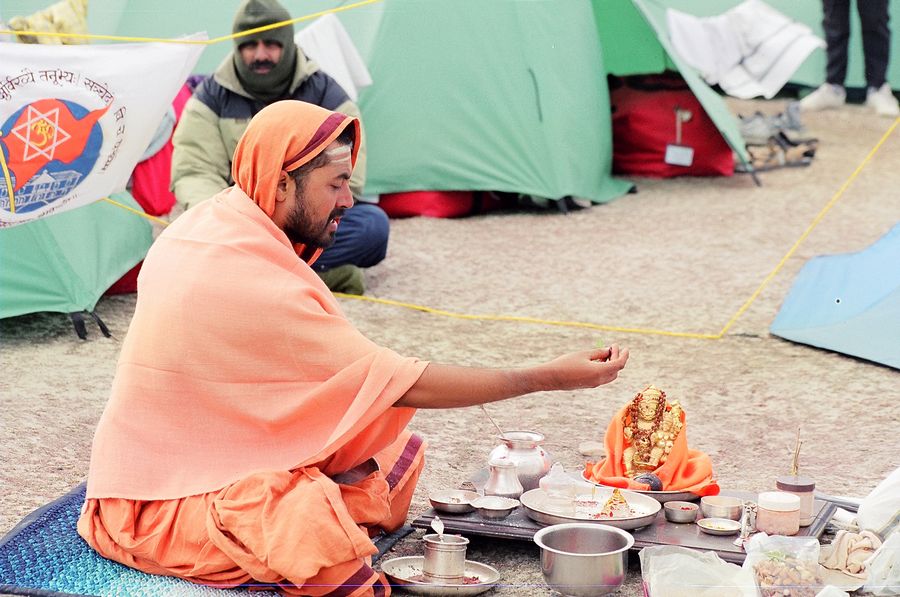 Mount Kailas which is supposed to be visible from M'sarovar refused to grant us Darshan for two days. A brief glimpse was seen as Swamiji performed Puja to the Lord on the banks of the Lake. We completed the Parikrama of the Lake by road & glimpsed several golden feathered Brahminy Ducks floating by. We all had had a dip in the cold waters of the lake in the bright noon with shivering bodies & rushed to the comfort of the tents. 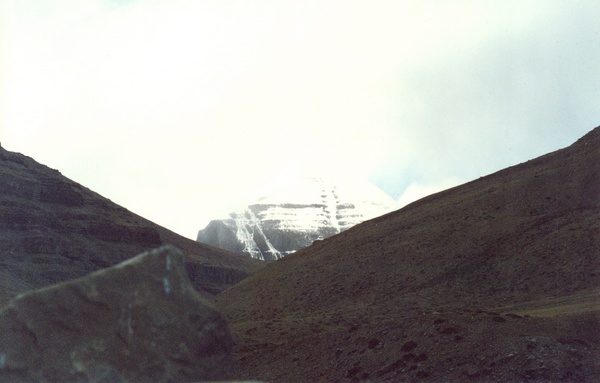 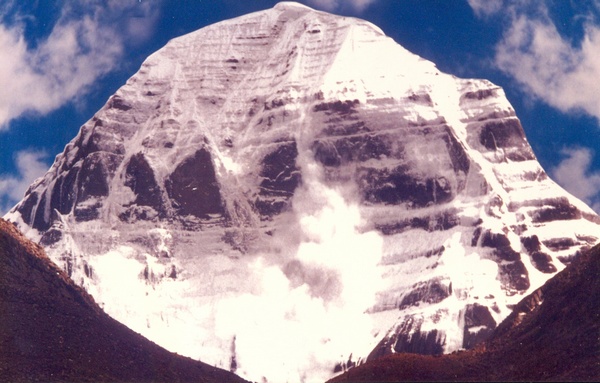 The following morning, we went to Darchen, at the base of Mount Kailash. But even then, there at its base, He refused to reveal Himself. However, we were granted Darshan of Ravana's Linga. And just when we reassembled & stood to start the Parikrama with Swamiji at the front, Lord Shiva in the form of Mount Kailash revealed Himself in all His resplendent glory. Wow!!! So very grand, pristine, majestic, awe inspiring & yet graceful & beautiful. We could make out three of His faces & an Omkaar too at its base. All of us stood in awe as Swamiji offered His traditional Danda Namaskaars to the Lord Kailash. It was indeed a very auspicious way to start the Parikrama!!!.

The first 4-5 kms on the first day, were meant to be a kind of a trial run since all the 96 Yatris wanted to do the Parikrama. But right at the outset, a few dropped out after the Holy Darshan & at the end of the 4 kms, there were 76 Yatris left to complete the Parikrama. However those who backed out on health grounds, were reassured by Swamiji that having crossed the Yama Dwar, we were all in the Shiva Spandana or in the region of Shiva. Having had Darshan of the Holy Kailash itself was akin to the Parikrama itself. And then we proceeded further on the Parikrama. Swamiji was always at the rear end ensuring that no one was left out & constantly encouraging the slow coaches to proceed further. The second day of the Parikrama was also on level terrain with a few ups & downs & we were able to have Kailas Darshan all the time. At the end of the 2nd day after walking for about 18 kms, we camped at Diraphuk, right at the base & in front of Kailash. Swamiji sat in ecstasy meditating all through the evening, inspite of the chill wind breezing through & at times we saw the snow cascading downwards from Kailas as if in the form of an Anugraha. We ordinary pilgrims continued to gaze & marvel at the Holy Mountain in its natural glory.

Early next morn, we started off on the difficult part of the Yatra. But little did we even dream of the troubles in store for us. Gasping & puffing we climbed up to the the Dolmala Pass at 18.6000 feet. Soon Kailash ceased to be visible till the end of the Parikrama, obscured as it was by the other mountain ranges. There were times when we stopped to rest, sat down & fell off to sleep. There was a beautiful Monastery dedicated to Tara Devi at the summit. Then the descent began. Gauri Kund, where Gauri is supposed to be performing her daily ablutions, was beautiful. A young Sherpa lad rushed down to get a little Teertha from the Kund. Then a long dreary walk along a river bed, amidst snow flurries & rain, till late in the mid-night to the camp left us fuming & fretting at the organisers for their gross mismanagement in not camping at an earlier, closer location. 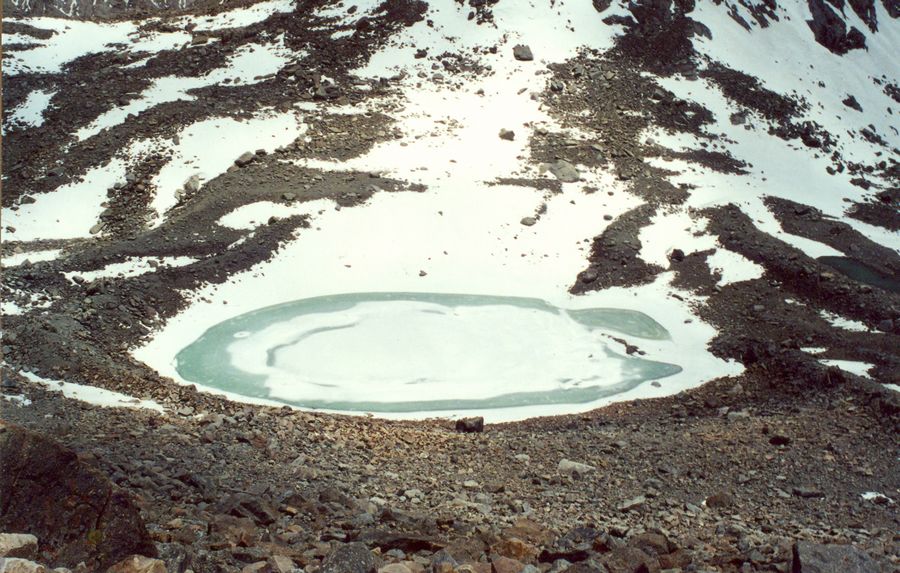 Woke up at 8am the next morning to flurries of snow & then trekked down to Zuthulphuk monastery & a short distance later, the Parikrama was over. We congratulated each other & got into our jeeps after paying & tipping the porters. As we drove to Mansarovar, we were once again granted the Darshan of the Holy Kailash with its familiar streak cascading down its midline as if wishing us Goodbye. We kept on craning our necks backwards for a one last glimpse of Kailash as our LandCruiser Jeeps raced towards Mansarovar.

It was on the second day of the Parikrama that we encountered a bare footed wandering Sanyasi, Shrimad Vikas Girji. He had Darshan of Swamiji & accompanied us along the Parikrama. This was as if in answer to a quest by our Swamiji. Our Pujya Swamiji had a deep inner urge to proceed towards the inner reaches of Kailash & feel its vibrations. Swamiji had also been requested, during a visit to Mount Abu, by Pujya Swami Iswaranandaji to fetch the Atma Linga from Kailash. As if in answer to all this, Swami Vikas Giriji had appeared amidst us that day. Swami Vikas Giriji had done the Kailash Parikrama ninety six times & was fully familiar with the terrain. Our Pujya Swamiji proceeded to Darchen guided by Swami Vikas Giriji, towards the inner reaches of Kailash. As we camped

M'sarovar for the night, Swamiji proceeded closer to the Holy Kailash at almost 20,000 ft & then at a particular point hugged the cliff & sat in meditation for a while till Plop!! something fell into the snow nearby. This was the Atma Linga from the Holy Kailash, an Anugraha from the Lord Himself. The Atma Linga was then brought down by Swamiji to be gifted to Swami Iswaranandji later. We at M'sarovar had our moments of anxiety till HH returned & when we watched the Puja to Lord Bhavanishankar, offered Silver Bilva Patras,in reverence & gratitude. Mount Kailash granted us Holy Darshan throughout the Puja & when it was over, the Vision covered itself from our direct gaze. However we had sealed the Vision of the Holy Kailash in our hearts forever.

We now packed our bags for the return journey eager to return to Kathmandu for a nice warm bath & much needed rest for our tired & fatigued bodies. The return journey through Paryang, Saga & Nyalam feels like a quick mirage now & we only remember the warm welcome at the Hotel Everest when we could at last sink into deep sleep in the comfort of soft, warm beds after a nice warm bath. In the evening we were rejuvenated enough for a Katha Kathan on Adi Shankaracharya by Chaitanya Gulvady. As the anecdotes of Shankara's visit to Kailas were related, we couldn’t help recollect our journey on familiar grounds led by our Pujya Swamiji. In the evening after the customary Deepanamaskar, Swamiji worshipped the Atma Linga & showered it with 108 Gold Bilvas, towards which we had all contributed. The return flight to Mumbai was bang on time as we hastened back to our homes amidst cascading showers of the early monsoon.

Throughout the journey Swamiji took upon Himself the entire responsibility of the flock of pilgrims like the Good Shepherd. He would constantly monitor the progress of all vehicles during the journeys and always enquire of, visit and comfort those who fell ill. Inspite of the vagaries of the terrain & the weather, which generally remained good through the Yatra, there were no major illnesses or casualties. It was His constant guidance, leadership, prayers & inspiration that alone made this memorable Yatra a grand success and a Yatra to remember Forever!!! 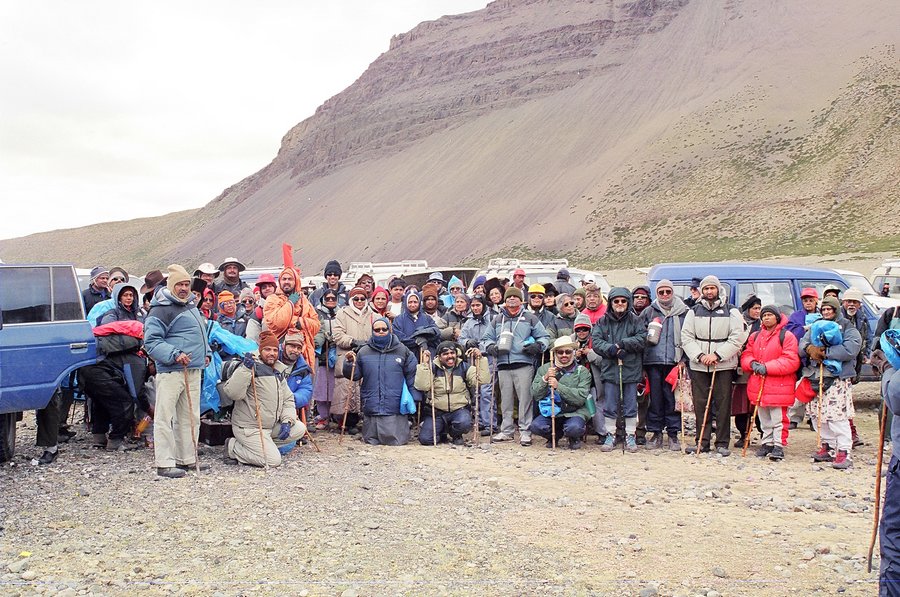 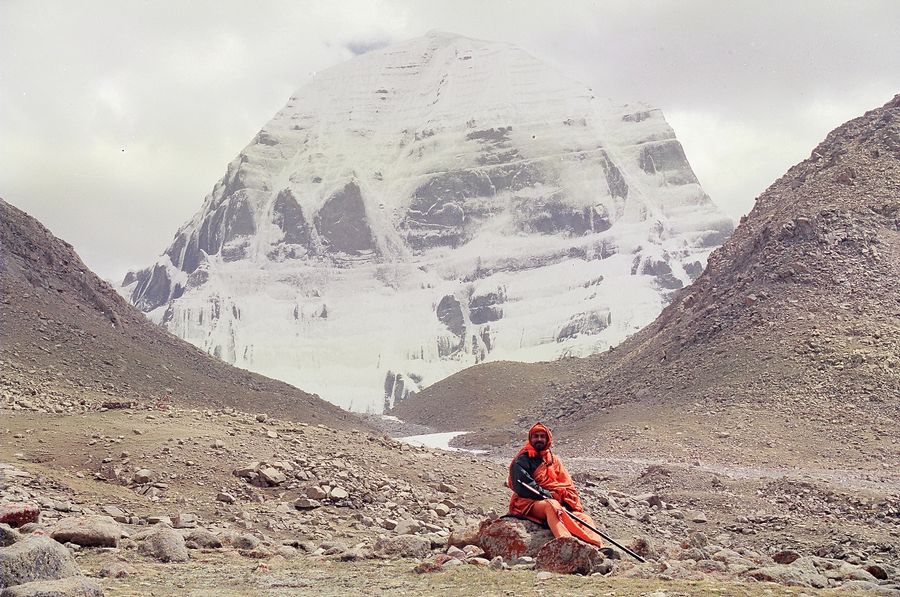