Guru Swami told an Italian gentleman who fully understood what was  said and even showed Him how to get there! Memorable vignettes from the UK visit of our revered Parama Guru Parijnanashram III.

It is because of the Apaara Karuna of  Gurushakti, that our most beloved Brahmanishtha Parama Guru- PP Shrimat Parijnanashram Swamiji III arrived at London Heathrow Airport in September 1979, upon completion of the Canada Chaturmas for a historic visit to the United Kingdom. This marked the end of PP Swamiji’s Digvijay of the Western World, which saw Swamiji travelling the length and breadth of North America and blessing the Bhanaps there. Truly, our Sadguru was a Paramahamsa Parivrajakacharya in every sense. Shortly after landing, Swamiji and His retinue encamped at the residence of the Nilawar family, London, where the Chitrapur Saraswats of the UK were to be blessed to witness Swamiji performing Madhyana Seva to Lord Bhavanishankar, Ashtavadhan Seva and Mangalpada for the next 8 days. It must be mentioned here that two legends of our Math and samaj were among Swamiji’s retinue: Ved. Vijay Vittal Bhat mam (“Sudha Tanay”) and Ved.Baindur Shivanand Bhat mam (“Baindur Shastri mam”).

Parama Pujya Guru Swami’s versatility and perfection in each field of knowledge was phenomenal, whether it be music or modern technology, but lesser known is Their grasp of horticulture and botany which expressed itself in visits to the world-renowned Royal Botanical Gardens at Kew and the Cambridge University Botanic Gardens. On the latter excursion, the UK Chitrapur Saraswats were indeed blessed to accompany Swamiji, turning it into a family picnic, where the Gurumauli was accessible to one and all. Swamiji also found time to visit the famous Cheddar Gorge Caves, Somerset. Bailoor Shashi kaka recalls with amazement how Swamiji went inside the perpetually cold interiors of the Caves wearing only the light clothing that you see in the photos. When he asked Swamiji, ‘ स्वामिजी तुमका शीन्क् खायना वे?’   Swamiji just looked at him and smiled as if to say that One who has won over the elements is least affected by them.
Our Dharmarakshaka Guruvarya, ever-conscious of upholding and propagating our sanskriti, was also accorded a bhavya swagat at the Bharatiya Vidya Bhavan in Kensington, Central London, where They blessed the gathering with an Ashirvachan in Hindi. Swamiji also visited the Ramakrishna Vedanta Centre, Bourne End, Buckinghamshire, where They met the recently- appointed resident head - Swami Bhavyananda.

Guru Swami, with a party of 5 and a minibus, embarked on a 10- day trip from 17th September, 1979 to explore Continental Europe. Among the party were Mankikar mam (member of the Standing Committee), Hosangdy Ram mam, Mangesh mam (who was part of Swamiji’s retinue), a young Goan Catholic (who was the driver) and a Gujarati gentleman. The latter two were non-Saraswats, but were very devoted to Swamiji. It was a packed itinerary that saw Swamiji travelling across France, Italy and Switzerland. Swamiji’s first stop was Bologne and from there on to Paris. Apart from visiting the Eiffel Tower, Notre Dame Cathedral and other Parisian attractions, again Swamiji’s keen enthusiasm for horticulture saw Them visiting the famous Versailles Palace and Gardens. Swamiji and the party then made their way through Rouen, Lyon, Cannes, Monte Carlo and Monaco. There was never a dull moment with Swamiji, who gave glimpses of Their divinity and legendary sense of humour and quick wit to the party members throughout the journey– truly this must have been a most heavenly road trip.

After France, Swamiji and party arrived in Italy. An almost unknown and sweet fact about our Paramapriya Sadguru is that Swamiji was very fond of pizzas (made to the strict dietary requirements of a true Yateeshwara). Swamiji’s first stop in Italy was the Leaning Tower of Pisa and from here They were proceeding along a highway to Rome and the Vatican City as Swamiji desired to meet, discuss and debate with Pope John Paul II, whose appointment had made top headline news in 1979.  The journey from Pisa to Rome saw two lovely incidents.

While halting for a pizza lunch, Swamiji astonished the group of devotees and the pizza vendor by recounting the full life history of the pizza vendor and his family members, right from birth till the present! Another beautiful prasang saw Swamiji’s legendary wit and keen sense of humour manifest itself. En route, the party lost its way. They were in the middle of nowhere, in the heart of the Italian countryside with not a soul in sight and no means of communication at all. Just then, an elderly Italian gentleman happened to be passing by. The Goan Catholic mam and the Gujarati mam decided that they would ask him and started asking him questions. But neither of them had any knowledge of Italian, while the old man knew no English. The two continued questioning, despite Swamiji telling both of them repeatedly that the old man neither knew, nor understood anything. This went on for quite some time when at last, our all-knowing Guru Swami intervened and asked in the most endearing Konkani, ‘आम्कां पोपाक मेळुक वैटीकना वच्चें आस्स वाट कश्शी माम्मा’  The villager must have understood what was asked, for he looked relieved and replied promptly, saying “Mi scusa Signor, Tutte le strade portano a Vaticani!” (My apologies Sir, all roads lead to the Vatican!) Thus ended the troubles of the party and the journey was resumed. After Rome, Swamiji and party travelled further northwards to the “city of canals”- Venice and continued onwards into Switzerland, halting at the picturesque city of Lucerne,where Swamiji concluded Their Grand European Road Trip. Swamiji and the party later flew back to the UK from Zurich on 27th September, 1979.

It was now early October and after spending a few more days in London, Swamiji completed preparations to return to India. Among those blessed to accompany Swamiji to the airport were the Bailoor family. One cannot imagine how those bhaktas must have felt in parting from our cherished Gurumauli. As the plane took off, those hearts, filled to the brim with the Guru’s love, must have been longing for more and ever more.Thus ended the historic UK visit of our Parama Guru, whose Apaara Mahima was visible throughout this most enchanting episode.

[This article is based on the presentation “Jai Guru Parijnan” by the UK Sabha in the Divine Presence of PP Sadyojat Shankarashram Swamiji during the NRI Shibir in December 2010. The author first offers shatakoti pranam-s at the Lotus Feet of the Guru. The author also expresses his thanks and acknowledges the help, valuable inputs in the preparation of this article and for the  precious photos provided by Bailoor Chandru mam and Sujata mami, Bailoor Shashi kaka, Hosangdy Ram mam and Kunda pachi, who were among those blessed to be present during PP Parijnanashram Swamiji III’s historic visit to the United Kingdom in 1979.] 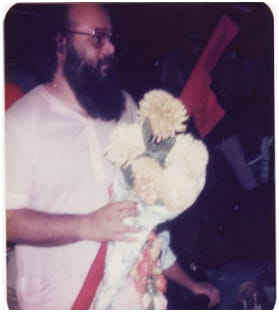 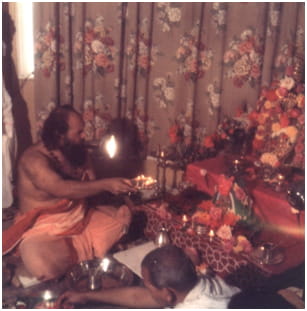 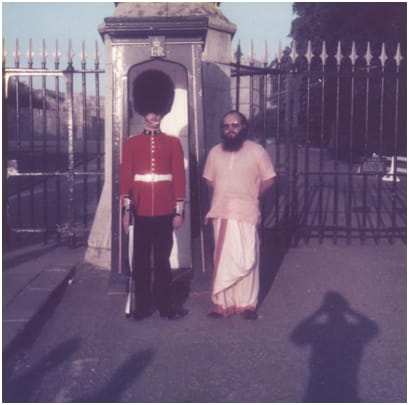 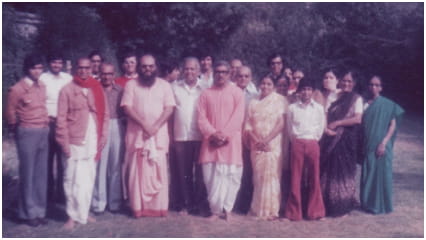 Parama Pujya Swami and the UK Chitrapur Saraswats at Cambridge 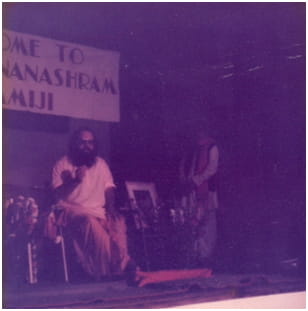 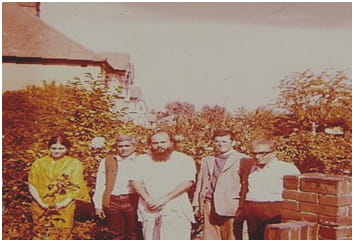