Vasant Hosaṅgḍī mām of Lucknow recalls his long association with Parama Pūjya Parijn͂ānāshram III Swāmījī and how a shared love for music became the foundation for an ever-lasting bond.

An auspicious and memorable event for all Chitrāpur Sāraswat-s, Parama Pūjya Parijn͂ānāshram Swāmījī’s Shishya-swīkāra ceremony, holds a particularly special significance for me. For it was in the preparations leading up to this joyous occasion that I was blessed with the opportunity of being in close proximity to H.H. Shishya Swāmījī.

Having been a devout follower of H.H. Parama Pūjya Ānandāshram Swāmījī since my boyhood, I would interact with Swāmījī's retinue members during H.H. Swāmījī’s camp in Bombay 1947 onwards. During these visits, I performed Saṅgīta Sevā during the Ashṭāvadhāna-sevā almost everyday. My enthusiasm and Bhaktī prompted me to follow Swāmījī to every Sabhā camp of Bombay. That is how I came to be part of the Shishya-swīkāra preparations, singing Ānandāshram Swāmījī’s favourite bhajana-s. This brought me close to H.H. Parama Pūjya Shishya Swāmījī too, who also took a very keen interest in music. 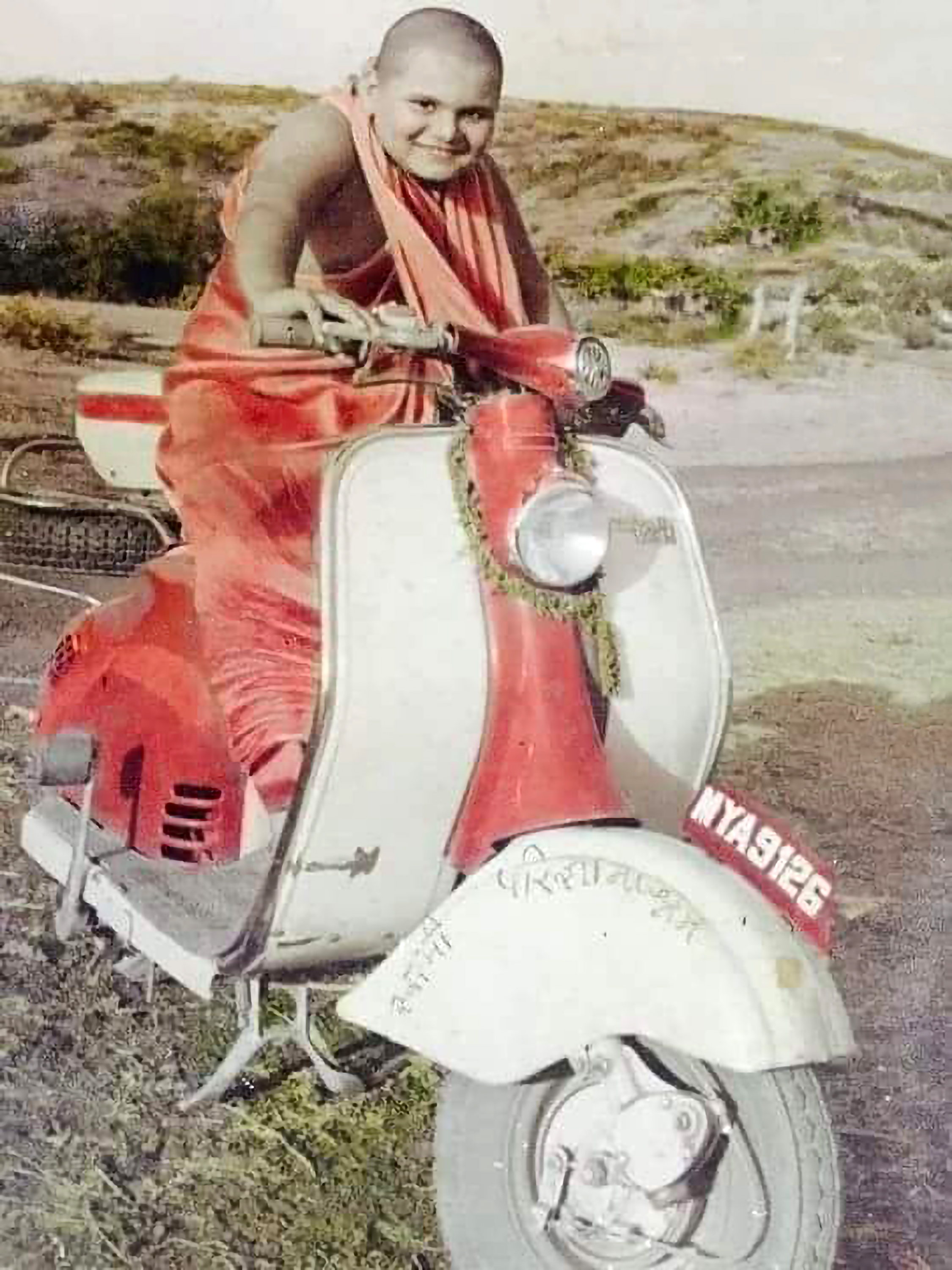 After Shishya-swīkāra, my friend, Mohan Hemmaḍy and I, followed both the Guru and Shishya Swāmījī-s all the way to Shirālī on a scooter. We were blessed to have a photograph taken of Shishya Swāmījī on this very scooter.  Still later, H.H. Parama Pūjya Parijn͂ānāshram Swāmījī autographed this precious picture (Look closely at the front fender in the picture alongside.) Enroute to Shirālī, during breaks at various places, we were privileged to spend most of the time with Shishya Swāmījī.

This was when I discovered that He could play the tabla and the straight flute. By the time we reached Shirālī, I found that I had made an everlasting connection with Shishya Swāmījī thanks to our common interest in music. 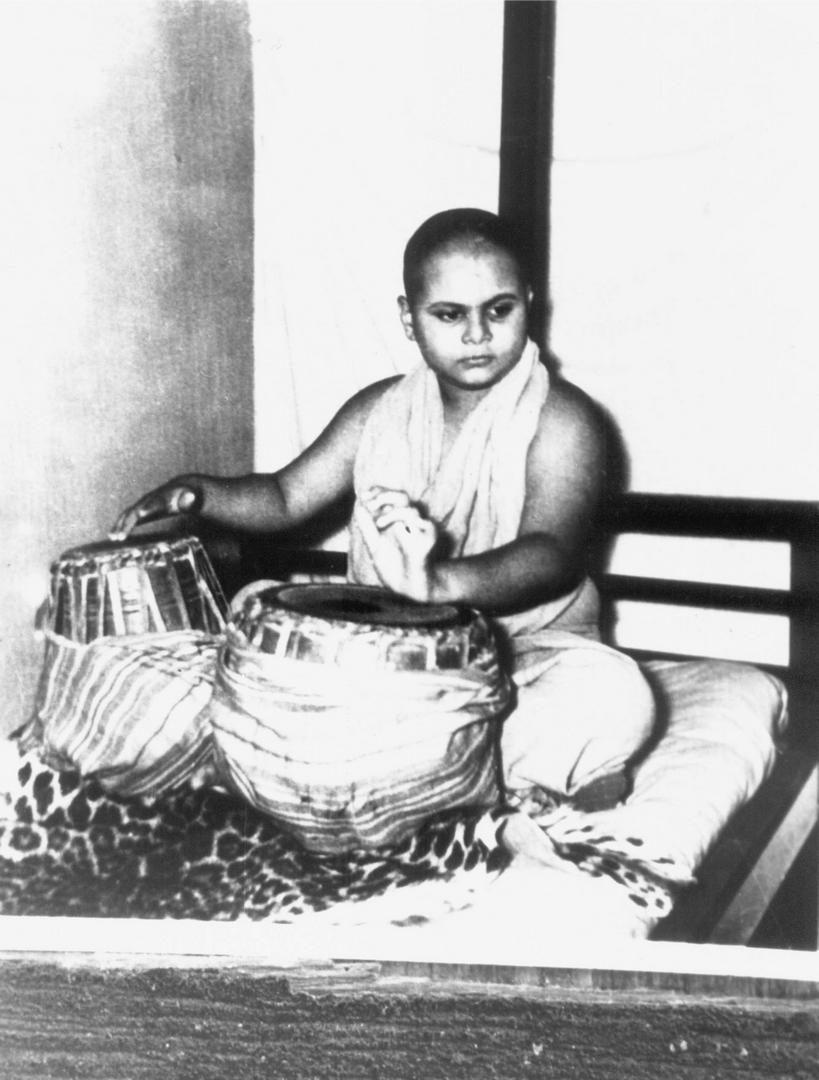 While visiting Pan͂chavatī, Kembre, and other places surrounding Shirālī, H.H. Shishya Swāmījī would explain several spiritual as well as social and materialistic matters which helped us to understand Guru Swāmījī's discourses. Discussions and music sessions took place generally post lunch until tea time in the pāthshālā premises, when Guru Swāmījī would be resting.

During these sessions, I sang devotional songs and H.H. Shishya Swāmījī provided tabla accompaniment. On a couple of occasions, Swāmījī even played the straight flute. We stayed in Shirālī for about a fortnight, after which, Mohan and I returned home.  Thereafter, I saw Shishya Swāmījī only after about two or three years.

The goods transportation business venture I started in 1964 required me to ply between Bombay and Bangalore  frequently. During my trips, I visited the Bangalore Math whenever both Swāmījī-s were camping there, and when They were in Shirālī, I would go there. This was the period when Shishya Swāmījī started writing devotional songs, which carried subtle messages with deep meanings for the laity. He would send for me and hand over bhajana-s from time to time, and ask me to sing them during the Ashṭāvadhāna-sevā. During that period, I composed many bhajana-s, of which I still sing about four or five.

In the mid-sixties, during my visits to Shirālī, Parama Pūjya Parijn͂ānāshram Swāmījī had blessed me with the privilege of installing loudspeakers in each of the guest rooms, pāthshālā, and various other locations in the Math premises, to enable the playing of devotional music whenever required during the day.

I had once sung a caricature version of a South Indian attempting the great singer Mukesh's song, "Teri Duniyā Mein Dil Lagatā Nahin” along with a funny story to introduce the song. H.H.Parijn͂ānāshram Swāmījī liked it so much so that He would suddenly ask me to sing it anywhere and anytime. One such occasion was during a Shrīvallī school function where Swāmījī had blessed the gathering with an Āshīrvachana. This frequent association of mine with Swāmījī lasted until about 1971, when I had to close my business due to health and financial reasons.  I, thereafter, took up music as my profession. 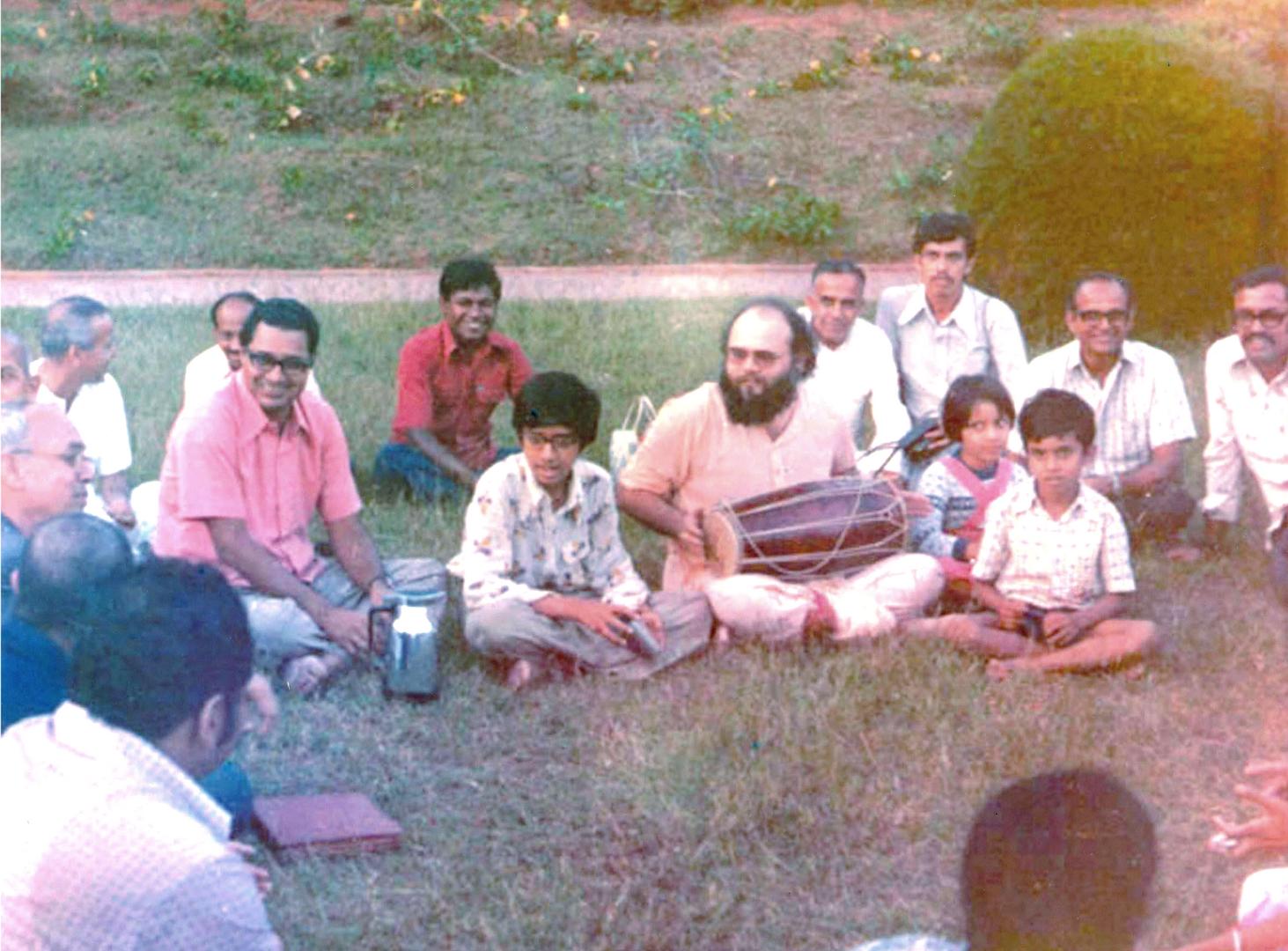 The last Darshana of H.H. Parijn͂ānāshram Swāmījī that I was blessed with was in May 1991 at Kārlā, when I was on my way to Shirālī for my son's Upanayanam. I spent about an hour with Swāmījī, when He asked me about what my current profession was and blessed me with success in the field. Before giving me Phalamantrākshata, H.H. once again asked me to sing His favourite "Teri Duniyā Mein Dil Lagatā Nahin". Little did I know the significance of His request then. It was only in August that year when I received news that His Holiness had attained Mahāsamādhi that the realization dawned.